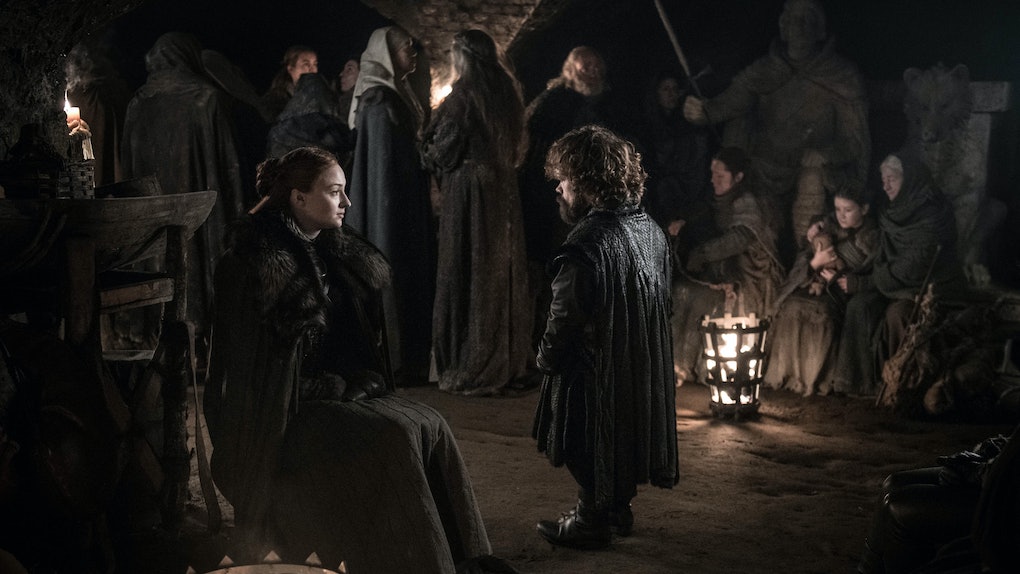 Game of Thrones Season 8 is closing itself out in style. The series has spent the first two episodes calling back to itself, and specifically its first season, as part of the run-up to say goodbye. The newest installment, "The Long Night," was a little different. As the show's peak battle hour, it was less concerned with callbacks and more concerned with moving the plot forward to its inevitable end. However, there were still enough Battle of Winterfell Easter eggs scattered throughout the episode for fans to feel like everything this season is coming full circle.

Of course, this week was Arya's week. Even if she hadn't been the one to take down the Night King, the show has spent seven seasons teaching her how to fight, and all of that training was put to good use in this episode. Nearly all her fight choreography was pulled from earlier episodes, be it Season 1 water dancing, Season 4 Hound training, Seasons 5 and 6 Faceless Man training, or the hybrid style of all these different methods which she used on Brienne in Season 7. From the Waif to Syrio, Arya was a product of her training.

But those weren't the only callbacks this week.

The opening credits change every week now. This week, the tiles representing the Night King's Army flipped their way to Winterfell's gates.

When Melisandre lit the Dothraki weapons on fire, she said "āeksiō ōños," meaning "lord's light." She repeated it in a larger incantation to set the trenches aflame. It's the same phrase Beric uses to light his sword.

Jon told Arya the way to use a sword was "stick 'em with the pointy end." Now Arya is passing that wisdom to Sansa.

4. Ice, Together At Last

Brienne and Jaime fighting side by side isn't just romantic as hell, it represents the two halves of Ned's greatsword Ice working together in tandem to defend Winterfell.

At the end of the Hardhome massacre, the Night King looks Jon in the eye, raises his arms and wakes the dead. The moment he started doing it this week, Snow knew his forces were hosed.

When Melisandre met Arya, she said she could see all of the Stark daughter's future victims — brown eyes, green eyes, and blue eyes. Guess she wasn't talking about Sansa for that last one after all.

Also, from Arya's Season 1 training: What do we say to the God of Death?

7. The Night King Is Fire Resistant

There were many callbacks to Theon's early story wrapped in a single scene.

The only thing that could unmake the Night King was Valyrian steel in the same point of entry the dragon glass was first pushed into his body all those centuries ago. Arya's aim was perfect.