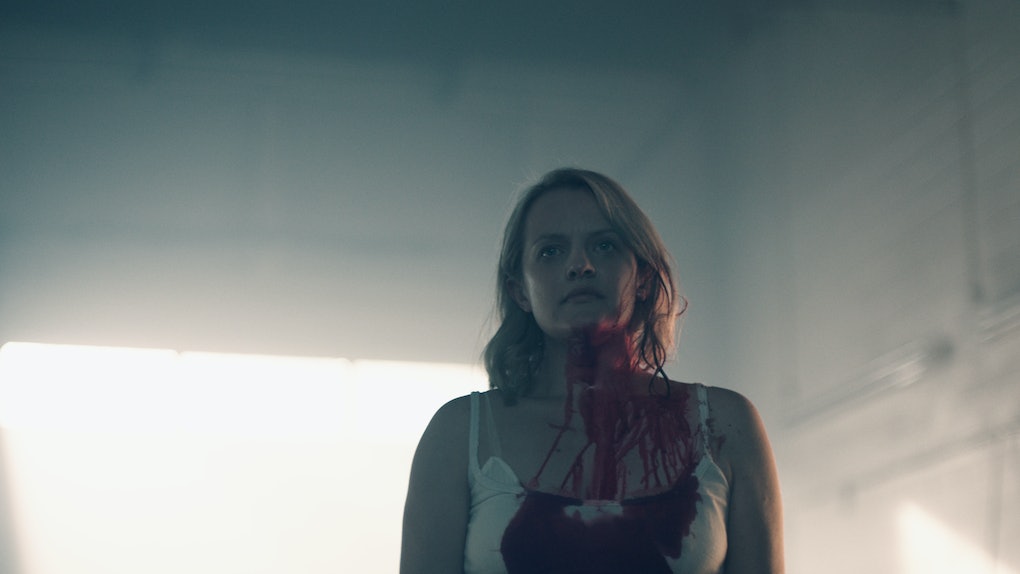 The Handmaid's Tale Season 2 is just around the corner, preparing to take fans back to Gilead and the horror of a dystopia that our own society had flirted with edging towards. Last season ended on a cliffhanger, as the Handmaid Offred (Elisabeth Moss) was taken away in a black van to destinations unknown. So, what is known about the upcoming season? Hulu has kept spoilers tightly under wraps, but there are more The Handmaid's Tale Season 2 spoilers out there than you might think.

Last season didn't just end with Offred's maybe-ride to freedom. It also basically ended where the book ended, save the epilogue. That means there's no more source material to directly pull plot lines from. There's only reference material to build anew. This is exciting because we'll get to explore places and people who are outside of Offred's immediate purview. It also means the show also gets to dive into stories which couldn't have been told in 1985 when the book was written, because they didn’t exist.

But don't worry, fans of the epilogue, the show hasn't forgotten about it. For those who haven't read the book, it's a time jump, taking place 200 years later in 2195, as Professor Pieixoto looks back into the recorded history of Offred, supposedly made well after the time of Gilead's fall, to help understand what happened. Exactly how the show plans to work that in remains to be seen, but the production promised it will be referenced down the line.

As for other spoilers:

1. Season 2 Is All About Motherhood

When The Handmaid's Tale Season 1 ended, Offred (real name June) was pregnant. Whatever happens, she's carrying a baby the Waterfords claim as theirs. Last season showed fans the complicated relationship between childbirth, handmaids, and wives.

That relationship is sure to be explored further, along with Offred's desire to get her daughter Hannah back. Moreover, the show is also going to have flashbacks that include June's memories of her own mother, played by Cherry Jones.

With the show having outpaced the book, the production worked very closely with author Margaret Atwood to help shape all the new world-building they're doing for Season 2, as the story leaves the guide rails behind and strikes out on its own.

Atwood might also be writing new material for a new edition of The Handmaid's Tale novel. How it will relate to Season 2 and beyond remains to be seen.

3. Ofglen (Emily) Will Be Shipped To The Colonies

Viewers will see the Colonies this season. This was revealed along with the above image of Emily, who is now a resident of a place characters whisper about in terror. Last we saw the former Ofsteven, she was dragged away after mowing down a Guardian in a desperate escape attempt. Actress Alexis Bledel has been promoted from guest star to season regular, by the way, so apparently, this is an important plot line.

4. Moira's Life In Canada Will Also Be Explored

Samira Wiley will also return as Moira, and, according to Wiley herself, has a "pivotal role" in exploring how our Canadian neighbors are handling things. The image from the trailer (above) shows a protest by former Handmaids, perhaps when a Gilead dignitary comes to town, declaring their real names.

5. We'll Delve Into The Marthas

Another actress who moved up to series regular from a guest star: Amanda Brugel. She plays Rita the kitchen maid, known as Marthas. Rita used to be in a relationship with Nick, and last season seemed to be involved with Mayday. Maybe she'll be the one aiding in Offred's escape?

6. Aunt Lydia Gets A Backstory

One possible plan for this season: a chance to dive into Aunt Lydia's life before Gilead. Ann Dowd won an Emmy for her portrayal of the Red Center's Aunt Lydia. It's not surprising the writers and showrunners are itching to give her more to play.

7. Bradley Whitford Has An Interesting Role

Bradley Whitford has been cast this coming season in a very interesting guest role: Commander Joseph Lawrence, the architect of Gilead’s economy. You know they're going deep into the world-building business when fantasy economics get involved.

Finally, the other two guest stars this season both play wives, which suggests maybe the show is diving deeper into Serena Joy's social circle. First, there is Clea DuVall (Veep), who plays the wife of Ofsteven. (That's the last house where Emily served as Handmaid.) Then there's Marisa Tomei (My Cousin Vinny), who plays the "wife of a commander." Except she's going to be out in the Colonies. Does that mean she's an ex-wife?