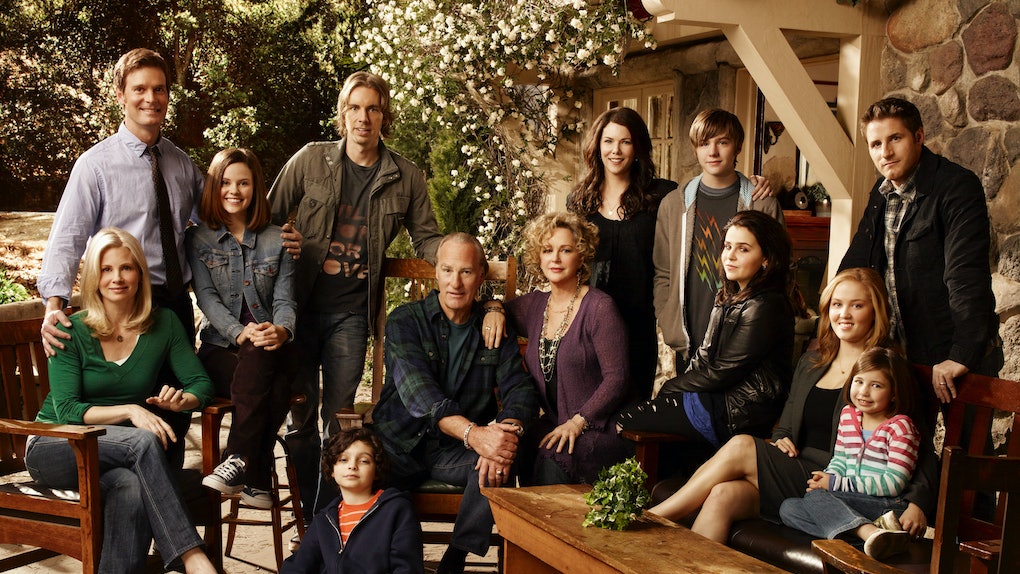 I'm all for quality over quantity, but when This Is Us wraps its season in March and isn't due back on TV until September, you can't blame me for seriously missing my go-to weepy show that allows me to have a good weekly cry. We have a long way to go until Season 3 of This Is Us premieres, so if you need a new way to release your emotions until then, we have the perfect solution: eight shows like This Is Us to stream if you're in desperate need of more crying sessions.

Like any show, This Is Us has its emotional ups and downs, and not every episode is an absolute sob fest. The last few weeks of Season 2 were pretty rough, but they still included some heartfelt, uplifting moments that reminded viewers why they tune in every week despite the promise of emotional distress. So, with that winning formula in mind, the selections below are just as heartwarming as they are sad or upsetting, and we can watch all of them from the comfort of our own beds. Even though Grey's Anatomy and Law and Order: SVU may make you sob, they're often not the sunniest stories, so that explains their absences from the list.

So, throw on your comfy pants, get the popcorn ready, and check your tissue supply - it's time to cry!

If you missed this hit period drama the first time around, now is the time to catch up on what everyone and their mother loved five years ago. In the pilot, an aristocratic family in England must reach out to its distant heir when the direct successor dies in the 1912 sinking of the Titanic. What follows is years of the family and their servants experiencing scandal, heartbreak, romance, and gorgeous 1920s clothing. Watch out for the particularly heart-wrenching third season.

If Rise just isn't doing it for your inner musical theater geek, there is no shame in binge-watching this classic teen show. Perhaps you grew tired of the antics of McKinley High's glee club a few seasons in, but returning to the show with present-day context is sure to get you weepy. Cast members have since died and none of the actors have quite reached the same star quality they had while on Glee. Everyone has to have their own nostalgic weepy watch, and Glee is a perfect choice.

Available on Netflix and Hulu

Before there was This Is Us, Parenthood was the solution for anyone seeking a multi-generational family drama that put their tissues to good use. An elderly couple, their four grown children, their significant others, and several grandchildren all suddenly live in the same area again just as everyone's lives take conveniently timed emotional turns. Unlike This Is Us, Parenthood doesn't do nostalgia-tinted flashbacks of the family's past, but it's perhaps even more realistic than This Is Us often is.

It may take you awhile to get into this BBC drama with seven seasons and counting, but the show manages to make me ugly cry during what feels like every episode. Following a group of nuns and midwives in London's East End in the late 1950s, Call the Midwife explores endless aspects of childbirth, reproductive health, medicine, and society during the mid-20th century. It regularly celebrates women's strength and, somehow, its depictions of mother-baby bonding always make me cry.

Your parents may be more familiar with this '90s drama than you are, but its latest streaming debut is just begging for a younger audience to discover the show. Starring a pre-Lost Matthew Fox as the oldest of five siblings, Party of Five begins when the siblings lose their parents in a car accident. While it's heavy on the sweet familial love, the show also has some intense episodes dealing with issues such as cancer and domestic abuse.

The show's series finale is sadly approaching, but if you want to relive the emotional ride of The Fosters, Netflix is the place to be. When we first met the Foster family, the loving home of a interracial, lesbian couple and their biological, adopted, and foster kids totally won us over. In true Freeform fashion, the show became drastically more intense over time, but its longtime element of family loyalty is still at the core of the show.

Although it's an outrageous comedy at first glance, Scrubs is actually great at capturing the daily heartbreak in a doctor's life. While you may smile at JD and Turk's friendship or Dr. Cox's bizarre metaphors, nothing crushes me more than one of the doctors unexpectedly losing a patient or doubting their ability to continue this kind of work. If the heaviness of Grey's Anatomy ever gets to you, Scrubs is a lighter but just as powerful alternative.

The most recent heartbreaking twist aside, Nashville likely has more emotional trauma in store, as the series wraps in July. It focuses on a legendary country star moving past her professional prime and a new star with rising fame disturbing the legend's career path. While it does praise and highlight women who try their best in their careers, there are plenty of bombshells throughout the show that will have you wringing out your tissues.

I have a long summer ahead of me without This Is Us, but if I'm ever in need of a good sob, now I know where to turn!

More like this
What Are The Eldritch Terrors In 'Chilling Adventures Of Sabrina'? They're No Joke
By Dylan Kickham
6 ‘Schitt’s Creek' Spinoff Ideas That Are Simply The Best
By Rachel Varina
Who Did Emily Poison? 'The Handmaid's Tale' Season 2 Is Off To An Intense Start
By Ani Bundel
Stay up to date