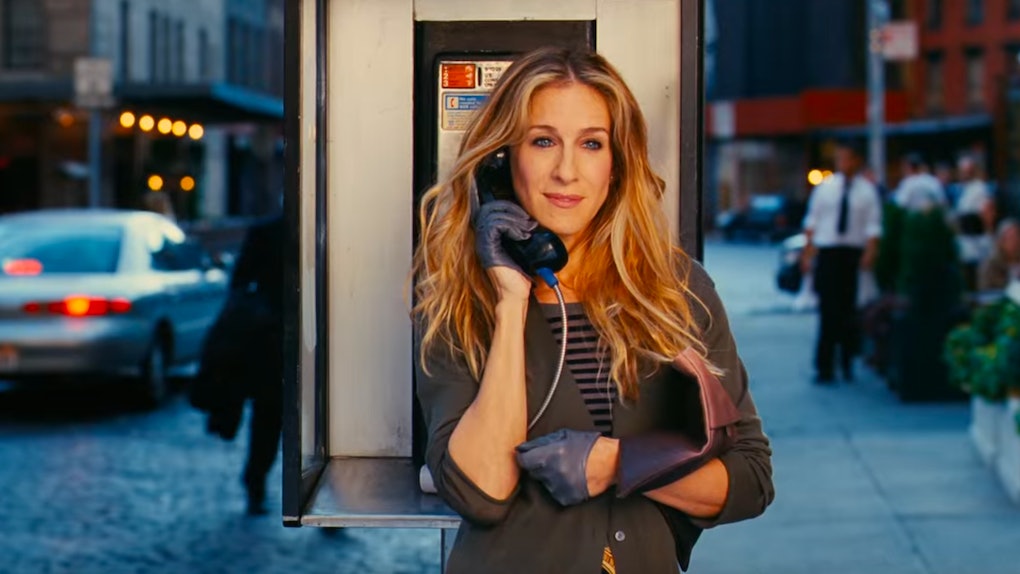 8 Shows Like 'Sex & The City' To Watch With Your Besties

Sex and the City has been a staple go-to romantic drama series for years, and there's nothing wrong with that. Watching Carrie, Samantha, Charlotte, and Miranda navigate their lives in New York — while remaining BFFs — is exciting, heartfelt, and even comforting at times. But you can only rewatch the series (or any series, for that matter) so many times until you crave something else. Luckily, there are plenty of shows like Sex and the City out there that just might become your new "go-to" show.

If you're into watching the relationship drama on Sex and the City, something like Younger might be right up your alley. If you are more into seeing the supportive friendship moments between the SATC women, you'll probably love Jane, Kat, and Sutton's bond in The Bold Type. And if you're perhaps a bit younger and want to see someone your age navigate life in NYC, Katy Keene or even SATC's prequel The Carrie Diaries might be exactly what you're looking for.

As you can tell, there are plenty of series similar to Sex and the City that are worth checking out — eight of which I've laid out for you below. All are available with a streaming service or for purchase on popular platforms. That's not to say any of these shows will take the place of Sex and the City, but they could be good options to add to your watchlist.

The Carrie Diaries is all about the young Carrie Bradshaw, who is in her junior year of high school in the early 1980s. Fans of Sex and the City will enjoy watching the origin story of Bradshaw and learn how she became to be a writer in the Big Apple. Plus, the show has its fair share of talk about relationships, sex, and friends — just like Sex and the City.

Where to watch: All episodes are available to stream for free on The CW Seed.

If you enjoy watching the women of Sex and the City kill it professionally in NYC, then Younger will be right up your alley. The series documents the life of single mother Liza Miller (Sutton Foster) who pretends she's *younger* than she is to restart her career and love life. Hilary Duff stars as Kelsey Peters, Miller's BFF and coworker at the publishing house. Both of the ladies also have some steamy relationships going on, which adds some extra fun to the show.

Where to watch: Younger airs on TVLand. All episodes are available to stream with a Hulu subscription, or for purchase on Amazon Prime Video.

Sex and the City has its fair share of funny moments, and if those are something that draws you in, you'll enjoy Broad City. The series documents the life of two 20-something best friends Abby and Ilana, who are close to the point that they literally do not hide anything from one another. Plus, they live in NYC, so the scenery from Broad City might remind you of that from Sex and the City.

Where to watch: All episodes are available to stream with a Hulu subscription, or for purchase on Amazon Prime Video.

Sex and the City is all about friendship among women, and if those are the kind of moments you like to see, Girlfriends' Guide To Divorce is right up your alley. The show follows main character Abby McCarthy (Lisa Edelstein) — who's a writer just like Carrie Bradshaw (Sarah Jessica Parker) — as she navigates a divorce and tries to jump back in the dating pool, with the support of her gal pals of course. From guy drama, to girl bonding, to an occasional literary reference — this show has everything Sex and the City fans love.

Where to watch: All episodes available with a Netflix subscription, or for purchase on Amazon Prime Video.

Shrill is a Hulu original starring Saturday Night Live legend Aidy Bryant, who plays main character Annie Easton (loosely based on writer Lindy West's memoir of the same name). Annie is an ambitious woman working at a magazine (another writer main character — watch out Carrie Bradshaw), who decides to shake up her life and embrace herself for who she is. Throughout the show, Annie gains confidence, finds her voice, and starts sticking up for herself once and for all. Sex and the City fans will love to watch Annie come into her own as a confident, no-nonsense gal at work and in her relationships.

Where to watch: All episodes are available to stream with a Hulu subscription, or for purchase on Amazon Prime Video.

The Bold Type is all about female friendships, love, and of course a little bit of glamour. It follows a group of three friends — Jane, Kat, and Sutton — as they navigate life working at a magazine. It's inspired by the life and experiences of former editor-in-chief of Cosmopolitan, Joanna Coles, so you know it's got that woman-about-town vibe that SATC viewers have come to know and love.

Where to watch: Episodes air on Freeform. All episodes are available to stream with a Hulu subscription.

Issa Rae plays Issa Dee in Insecure, and the series provides a super-real look at love, life, and dating in a big city. The show is a lot about the fictional Issa's career and her awkward dating encounters, but it all centers around her relationship with BFF Molly (Yvonne Orji) and their close-knit group of girlfriends. Sex and the City fans will love watching the women share their stories in Insecure.

Where to watch: All episodes available with a Hulu subscription, or on HBO Now and HBO Max.

If you love NYC, you'll probably like Katy Keene, which documents the lives of four 20-something BFFs who are trying to make it in the Big Apple. It's basically what Sex and the City would be if Carrie, Samantha, Charlotte, and Miranda were a bit younger and more into the arts. This is a Riverdaele spinoff, so bonus points if you're into that show as well.

Where to watch: Episodes air on The CW. All episodes are available to stream for free on The CW's website.

More like this
20 Shows Like 'Shadow And Bone' To Watch When You Need A Fantasy Escape
By Abby Monteil
'Emily In Paris' Season 2: Premiere Date, Trailer, Cast, Filming News, & More
By Dylan Kickham and Ani Bundel
Netflix Canceled 'The Irregulars' After 1 Season & Fans Are NOT Pleased
By Ani Bundel
Stay up to date