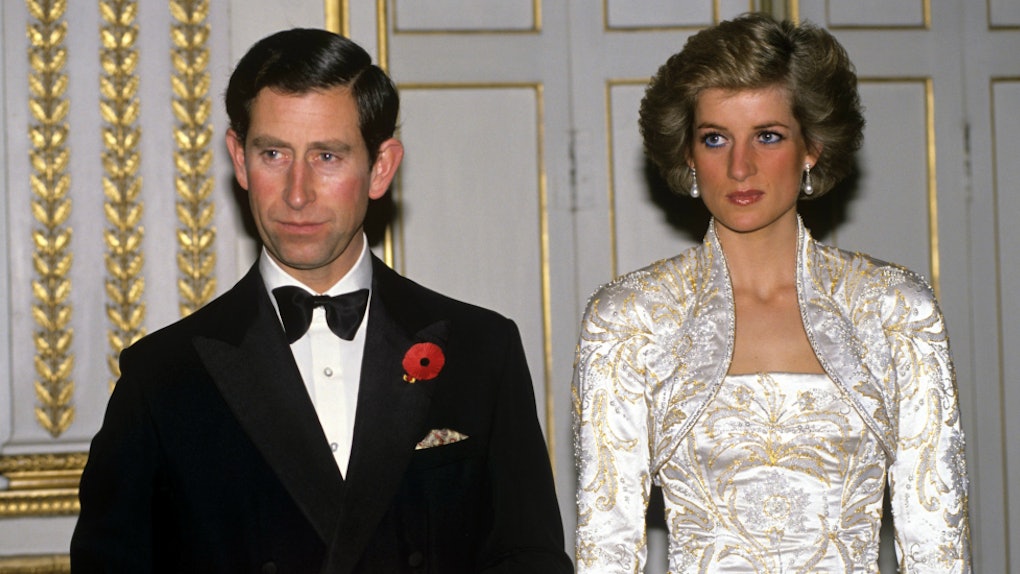 8 Royal Marriages That Ended In Divorce, Because Celebs Are Just Like Us

Like anyone in the public eye — but probably even more so — royal families do their best to avoid any sort of scandal. You may not think divorce is in the cards for royals (I mean, Queen Elizabeth II has been married since 1947!) but there have actually been quite a few royal marriages that ended in divorce, in the British royal family and in other monarchies, too.

It makes sense if you think about it. Just because you're in the public eye or a member of a royal family, doesn't mean you're immune to relationship problems. And that goes double when you think about how common divorce is. The divorce rate in the U.S., for example, is still around 40 to 50 percent, according to the American Psychological Association.

From Prince Charles and Princess Diana's high profile 1996 split to royal sisters Princess Caroline and Princess Stephanie of Monaco dealing with multiple divorces, here are the details on some of the most well-known royal splits throughout history. Some of these relationships ended in controversy (with details of affairs being leaked by the press, for example), while others came to an end without much explanation beyond rumors of unhappiness.

Prince Charles and Princess Diana divorced in 1996 — in what was probably the most high-profile royal divorce — after getting married in 1981 and having two children, Prince William and Prince Harry. People reports that the couple had separated four years earlier in 1992, after the press leaked calls between both Charles and Diana and their respective lovers (in Charles' case, his current wife, Camilla, Duchess of Cornwall; in Diana's case, James Gilbey). The separation also came after Andrew Morton's Book Diana: Her True Story was published and revealed details about Diana's struggles with her mental health. Their divorce went through in August 1996, just a year prior to the tragic car crash that caused Diana's death.

Princess Anne, daughter of Queen Elizabeth II, married Captain Mark Phillips in 1973, separating 15 years later in 1989, and ultimately divorcing in 1992. According to a 1989 report in People, the two initially did not have plans to officially divorce when their separation was announced, though that would change a few years later. The split was reported to have been due to unfaithfulness on both their parts and, in general, distance and a lack of love in their relationship.

Princess Margaret, Queen Elizabeth II's sister and only sibling, married photographer Antony Armstrong-Jones in 1960 after ending what was considered a scandalous relationship (and almost marriage) with divorced war hero, Peter Townsend. According to History, Margaret's marriage to Armstrong-Jones was strained thanks to drug and alcohol use, along with adultery. The two ultimately divorced in 1978, making Princess Margaret the first senior member of the royal family to get a divorce since 1901.

Prince Andrew, Queen Elizabeth II's third child, married Sarah Ferguson in 1986, but the marriage only lasted six years. The couple separated in 1992 — the same year as Prince Charles and Princess Diana, and the year Princess Margaret and Antony Armstrong-Jones officially divorced. The couple had two daughters together, Princess Beatrice and Princess Eugenie. According to People, the couple remained close friends even after their divorce, though Ferguson was was photographed a few months after the divorce sunbathing topless with her financial adviser — a scandal in the eyes of the royal family. Ferguson has largely been snubbed by members of the royal family since the divorce, according to CNN.

Prince Joachim of Denmark married Alexandra Christina Manley (now Alexandra, Countess of Frederiksborg) in 1995, and the couple had two sons together. According to People, the pair split after nearly a decade together, divorcing in 2004 — making it the first divorce for the Danish royal family in 150 years. Though there aren't many details about why the couple divorced, Prince Joachim's parents, Queen Margrethe and Prince Henrik, "deeply regretted" the divorce, according to a 2004 report in Hello!.

Princess Irene of the Netherlands and Carlos Hugo, Duke of Parma got married in 1964, after Irene infamously gave up her right to the throne to be with him. The summer before they married, Irene secretly converted to Catholicism so she could marry Hugo, doing so all without the approval of the Dutch States-General, according to CBS News. The couple wound up divorcing in 1981, though it's unclear why.

Princess Caroline of Monaco (daughter of Prince Rainer and Grace Kelly) has famously had three marriages, the first to Philippe Junot, whom she married in 1978 when she was just 20 years old. The couple divorced two years later in 1980, and she later remarried in 1983 to Stefano Casiraghi. Casiraghi died in a tragic accident seven years later in 1990, and Princess Caroline married Prince Ernst in 1999, though the two — while not divorced — have been separated since 2009, according to People.

Princess Stephanie of Monaco (Princess Caroline's younger sister) has been divorced twice. Her first marriage to her bodyguard Daniel Ducruet — with whom she had two children — lasted only a little more than a year. They separated in 1996 after Italian magazines published photos of Ducruet having an affair with another woman, according to The Chicago Tribune. Princess Stephanie went on to marry an acrobat named Adans Lopez Peres in 2003, divorcing him a year later in 2004.

In the end, royals may not be just like us, but they do have to deal with many of the same relationship problems the rest of us do, as these examples prove.