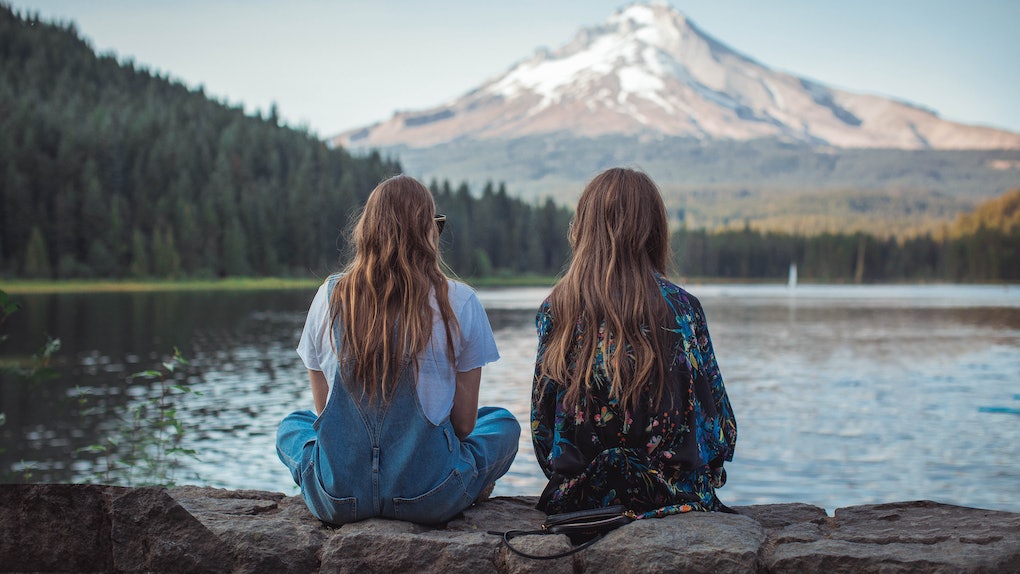 If you have a sister, you know how incredibly lucky you are. A sister is the best friend you never had to ask for, and you're beyond blessed to have her in your life. She was most likely your first fight, and you know you'll be arguing over whose memory is better one day (while you're toasting mimosas on the front porch). She's truly your other half, and you can't imagine what life would even be like without her. Truthfully, there are many reasons why your sister is "your person."

Of course, you both have other friends, and definitely both have other best friends. But no one can really come close to the bond you share with your sister. She's been your day one since literally day one, so it's kind of hard to top that. TBH, I don't really understand how people survive without a sister of their own — she's kind of my biggest supporter, biggest competition, and biggest heart all in one.

"Your person" is the one human you know you always can turn to. "Your person" loves you, but also knows you too well to let you continue on your bullsh*t when they know you shouldn't. Here's the bottom line — if your sister is your BFF, she's probably also "your person" and you didn't even know it. Read on for eight reasons why your sister is the best person you could ever ask for.

1. She Knows Pretty Much Everything About You

From her very first heartbreak, to your most embarrassing moment, the two of you know about it all, mostly because you actually were there to experience it together. You were there for each other's rejections, and you were also there to celebrate each other's biggest accomplishments. Oh, you've also gotten through many rollercoasters of family vacations together (both in one piece).

2. You Have A Million Inside Jokes, And You Never Forget Any Of Them

To anyone else, your texts look like a string of gibberish, but the two of you know everything has another meaning, even if it's truly nonsense to an outsider. You might not know where every inside joke originated, but all it takes is one key word to make the two of you break down in a fit of laughter.

3. No One Can Laugh At Your Parents Like The Two Of You

Growing up in the same household, you both have grown to love and appreciate the bond you have because of it. Who else would know just how funny it is when Mom makes that face two drinks in? And who else would appreciate Dad's corny dad jokes? No one but "your person."

4. You're Almost The Same Person

Favorite food? Check. Laugh? Eerily similar. Closets? Almost identical. As much as you might try to deny it, you and your sister are super similar — mostly because you grew up together, and you are each other's missing puzzle piece.

5. She's The First Person You Want To Call

The tire on your car is flat, your card got declined at the mall, and your SO is just not getting it. Who do you call? Your sister, of course. She's the one you immediately reach for the phone to call when you get a promotion, land the big project, or get a text from that new person you're seeing.

6. You Talk Every Single Day

You wake up, and she's already venting to you via text about the morning coffee that burned her tongue and also stained her new shirt. You get bored in class, and naturally bombard her with a string of messages, to which she replies, "SHUT UP!" (which only ended up sending the two of you into a Gif war). Basically, you're texting each other every waking hour of the day, and you have absolutely no shame.

7. Your FaceTime Calls Are The Real Deal

FaceTiming with your sister is the realest you have ever been and ever will be. You have spontaneous FaceTime dates to recap your day, vent about your boss, be goofy AF, and get the lowdown on the hot date she went on over the weekend. And when she gives you a ring, the whole world is set on pause.

8. Keeping A Secret From Her Is Nearly Impossible

As much as you try to, keeping secrets from your sister is pretty much at the top of the impossible list. Even if it's something good — like the concert tickets you'r getting her for her birthday — you find yourself wanting to spill the beans and loop her in.