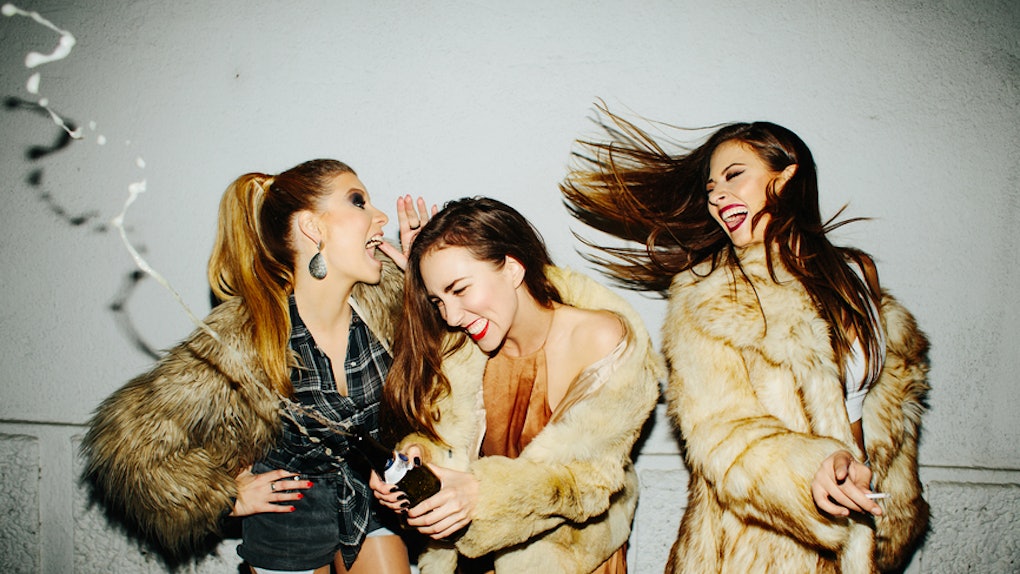 Not to sound like a Negative Nancy over here, but 2017 was such a problem politically, socially, and morally. I think it’s safe to say we’re all trying to cross over into the new year on a clean slate with the hopes of peace, love, and good vibes all around. The last thing we want to do is jeopardize our luck before 2018 commences, so if you’re unaware of the many New Year’s myths and superstitions that could potentially mess with your stellar new beginning, you might want to brush up on celebratory behaviors that could cost you more than a hangover.

Personally, I'm not a huge fan of superstitions; I like to think I control my own fate. However, I suppose you're always better safe than sorry, so there's no harm in taking the necessary precautions, especially when the tiniest details could determine whether or not 2018 is going to be a success, or another major flop like 2017 turned out to be.

So, while you're planning out your New Year's Eve celebrations, it might be worth it to take the following myths and superstitions into consideration, from the lingerie you wear under the perfect party dress, to the foods you eat prior to your epic soiree.

In my opinion, one of the best parts of New Year's Eve is playing dress-up. Glitz and glam are always on-trend to ring in the new year looking and feeling fabulous, but while that gold sequined dress is sure to rack up a few likes on Instagram, your lingerie is what's going to determine your luck in 2018.

In Bolivia, the color of the underwear you don on NYE is what will ultimately seal your fate for the new year. There's even a color code to refer to. Sporting red panties, for instance, means passionate love could be heading your way come Jan. 1, while yellow undies symbolize happiness, green means prosperity, white is for peace, and so on. Better make a pit stop at Victoria's Secret, ladies.

2. Set Fire To The Past, Literally

If you've ever set fire to a stuffed animal your ex gifted you after a messy breakup (been there), then you probably know how amazing it feels to literally set fire to the past.

Ecuadorians do this every year on New Year's Eve to ensure their new year isn't weighed down with baggage. According to Condé Nast Traveler, locals gather one or multiple photographs that symbolize everything they don't want tagging along in the new year and burn them, while scarecrows are set on fire to "ward off evil spirits."

3. Skip The Wine, Eat Grapes Instead

If you prefer a glass of chardonnay to champagne on NYE, you might want to consider forgoing alcohol altogether and instead, do as the Spaniards do, and eat 12 grapes when the clock strikes midnight.

Once that shiny disco ball drops down from its tower in Times Square, Americans get rowdy and super affectionate to celebrate the fresh start. In Spain, rather than noisily clinking glasses and exchanging kisses, everyone eats 12 grapes to symbolize the 12 months ahead.

According to Food Republic, eating the grapes "guarantees starting off the year with a little adrenaline rush." The goal is to eat them all within 12 seconds after the New Year begins. Now that's an interesting party game, no?

4. Steal A Kiss When The Clock Strikes Midnight

I don't know about you, but I never put two and two together that exchanging kisses on NYE was a notion of good luck, because my family's super affectionate in general. Apparently, though, smooching an SO — or the cutie you just so happen to be standing next to when the ball drops — can mean good things for your love life in the new year. Otherwise, you could experience a major romantic lull for the next 12 months.

This cliché tends to resurface a lot in the wellness space, but I bet you didn't know the right foods are not only good for your health, but possibly your wealth, too.

Rumor has it that if you go into the new year eating greens or any kind of beans, there's a chance the next 12 months will bring you major financial gain. Just another reason to eat your vegetables, friends.

6. When One Door Closes, Another Opens

I'm willing to bet that most, if not all of us, are just about ready to kick 2017 to the curb. To seal the deal, open all your doors at midnight on NYE to literally embrace that whole "out with the old, in with the new" mantra. By doing so, you're showing that you're ready to let go of the bad from the year past, and embrace the potential for good in the 12 months to come.

Personally, I love cleaning my apartment. I feel so refreshed when I can sit down at the end of the day and admire my squeaky clean floors and pristine countertops. According to Chinese New Year traditions, clearing out a messy home is considered good luck — but there's a catch.

Mental Floss reports that while Chinese tradition is all for giving your living space a deep clean prior to the new year, there's a specific way to go about it: "sweep the home inward, collect the dirt, and dispose of it out the back door instead of the front one."

8. Make Sure Your Champagne Glass Is Full

Toasting a glass of bubbly to ring in the new year is a common tradition, but even if you don't like champagne or aren't much of a drinker, make sure your glass is full of something — that is, except water.

Huffington Post reports that you're better off clinking empty glasses than ones filled with H2O, and this superstition dates back to ancient Greek mythology, when people would "toast to the dead with glasses filled with water" to symbolize their transition to the Underworld. In other words, raising a glass of water to your guests means you wish them death, which I'm assuming you don't want to do (and if it is, maybe you need to find other people to celebrate the holiday with).