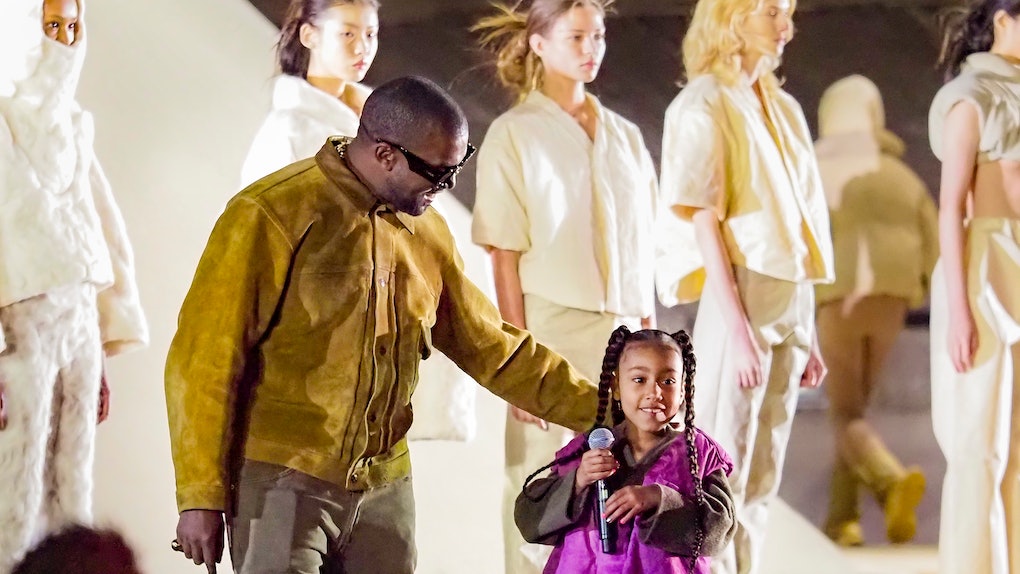 It's no secret North West has an affinity for the stage. Ever since her father, Kanye West, kicked off Sunday Service in 2019, fans are practically guaranteed to see little North bobbing along to next to him whenever the Kardashian-West family attends a service. Just like her father, North seems to be a fearless artist, jumping at the opportunity to entertain others, regardless of whether it's in front of a small classroom or a crowd of thousands. Just take a look at these 7 videos of North West performing on stage.

Let me put things into perspective for you. North recently took one of the biggest stages of her life (for anyone’s, really): Paris Fashion Week. On March 2, she opened for West's Yeezy Season 8 collection. Rather than rap an original song, she performed her own spin on 4-year-old MC ZaZa’s "What I Do?" while models made their way down the outdoor catwalk in monochromatic clothing.

North's performance drew cheers from the crowd. I have a feeling they were totally impressed with how she kept her cool in the spotlight. Then again, it wasn't her first rodeo. You’ll see what I mean when you look at these videos of North West performing.

West started Sunday Service on January 6, 2019. From then on, videos emerged from the weekly service — many of which featured North dancing and singing with her father and the choir. Here she is on March 3, 2019 performing her own praise dance to her dad's gospel take on SWV's "Weak."

2. Bold Moves in a Bold Outfit

On March 17, 2019, North stunned fans when she broke out her best dance moves decked out in an all-over black fit and matching black lipstick at Sunday Service.

On April 7, 2019, North decided it was time to switch things up. She ditched her dancing shoes for the mic and joined the choir in singing Stevie Wonder's "As."

West took his "Sunday Service" event to Chicago on Sept. 27, 2019, and North had no problem singing her heart out in front of thousands in a totally different arena.

Two days later, North shared the stage with her brother Saint, and danced along to the gospel music featured in West's Jesus Is King documentary screening. I guess you might consider this her first collab.

6. Shutting Down The School Dance

On Feb. 7, North amazed her classmates and their parents as she performed an original song during the school dance. Of course, her dad was there to cheer her on.

Yes, you're hearing about North's Paris Fashion Week show, again — because it was that epic and you need to see it to believe it. This legendary performance happened on March 2. North opened West's Yeezy Season 8 fashion show with a remix of ZaZa's bop "What I Do?" and finished her set by screaming into the mic. Icon.