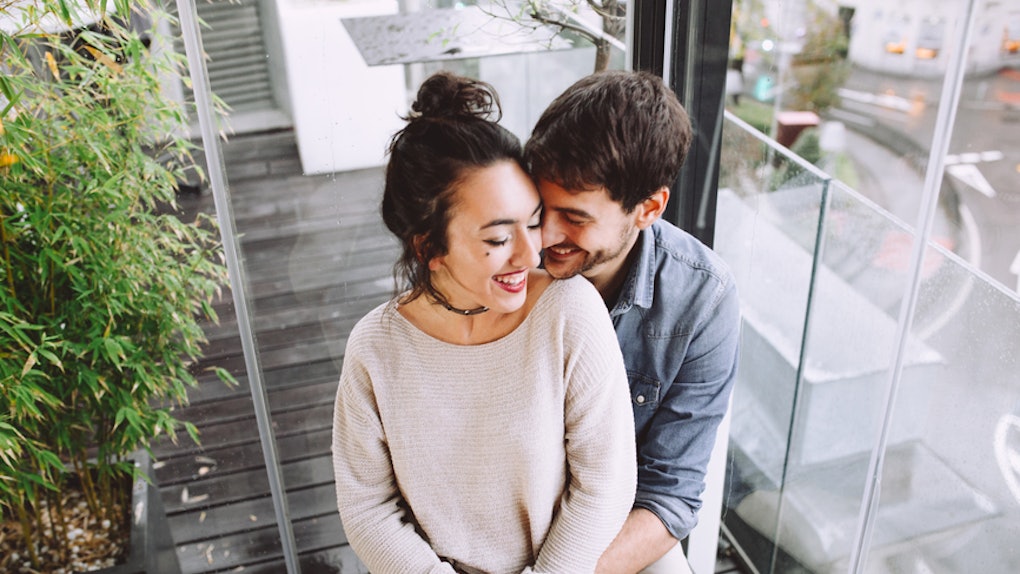 7 Signs He Wants To Make It Official With You

Relationships, especially at the very beginning, can be really confusing. Chances are, if you really like the person you’ve just started dating, one or both of you is actively playing it cool to not to scare the other off. While it's necessary not to come in too hot, the result of all this casualness can be that there isn’t great communication about where you want things to go. In that case, you may need to rely on your instincts to pick up on subtle clues to know if the person you’re dating actually wants to make it official.

We've gotten pretty good at picking up red flags — whether we heed them is another story — but it's sometimes harder to see the positive signs that the relationship is moving in the right direction. In my experience, relationships that are going somewhere tend to take on their own natural momentum. If it stalls out, there’s a reason. One or both of you is pulling back. But that doesn't mean there isn't some room for a little grey area, especially around the time when casual dating is about to turn into something more. But without suddenly becoming a psychic, how do you know whats in the other person's mind? Well, here are some hints that point toward them being ready to update their relationship status.

1. They Include You In Their Day-To-Day Plans

Have the pre-planned dates turned into naturally spending most days together? If you’ve gone from being a weekend thing to on each other's (almost) daily agenda, things are likely headed from casual into official territory. However, if they aren’t including you in their plans, that’s a red flag. Or if you find that all your time together is spent alone, or in bed. While that can be really fun, refusing to spend time in public or keeping your relationship hidden doesn’t bode well for the future. Which brings us to the next sign…

2. They’ve Introduced You To Friends And Family

Have you met their friends, family, acquaintances, and co-workers? Chances are they are ready to move the relationship along. According to NYC relationship expert Susan Winter, this is a strong indication that they are on the verge of becoming more serious with you. “Your public presentation is their way of 'testing the waters' by including you in their life," she says. If your partner is bringing you into their inner circle, it’s a great indication that they want you to stick around in a more official capacity.

3. They’ve Deleted All Their Dating Apps

Have they disappeared from Bumble, Tinder, Plenty of Fish, etc? If they have given up on swiping, then it’s a great sign they’ve found someone they want to commit to. Spoiler alert: It’s you.

Most people who are casually dating multiple folks naturally tend to keep that to themselves. While that can be a bummer if you’re on the other side of that, the truth is if you haven’t defined the relationship, it’s totally within their rights. But that also means parts of their lives tend to be closed off to you. If they’ve suddenly become an open book, it’s likely because there is nothing they want to keep from you out out of politeness (or shadiness) because they’ve stopped dating anyone but you.

5. They Are Consistent And Reliable

Are they flakey? Do they make plans last minute and then casually break them? Bad news: They aren’t planning to make anything official anytime soon. Senior matchmaker and dating coach Lori Salkin warns that if things “still feel… very casual and he just calls when he calls and you have no plans for the weekend until that morning or are not including each other in important events like your office Holiday party or your cousin’s Bar Mitzvah,” that’s a huge red flag that things are not moving in the right direction. Someone who wants to lock it down will be consistent and reliable because they want see you and consider spending time with you as the priority over other plans.

6. You Can Have A Conversation About Relationships Without Them Getting Squirrelly

When you’ve tried to talk about relationships, either with them or in general, do they nope out, or do they engage? If it’s the latter, that’s a good sign. It means who you’re dating isn’t totally freaked at the thought of commitment and that they are invested enough to want to put in the effort to address your feelings. If they actually seem warm to the idea of relationships, they may be intentionally or unintentionally sending the message that they want to make things official with you.

Sometimes knowing if the person you’re dating is ready to move forward is just as simple as feeling like it’s the natural progression of the relationship. It may sound cliched, but when you know, you know. It just sort of unfolds organically. If you feel yourself having to be either the gas pedal or the brake on the relationship, it likely means one of you is feeling reluctant. As much as you might want to, you can’t force things, so it’s best to relax and let things take their course.

At the end of the day, if you really want to know if they are ready to take the next step, just relax, trust your gut, and try not to overthink it too much. Yeah, good luck with that, right?