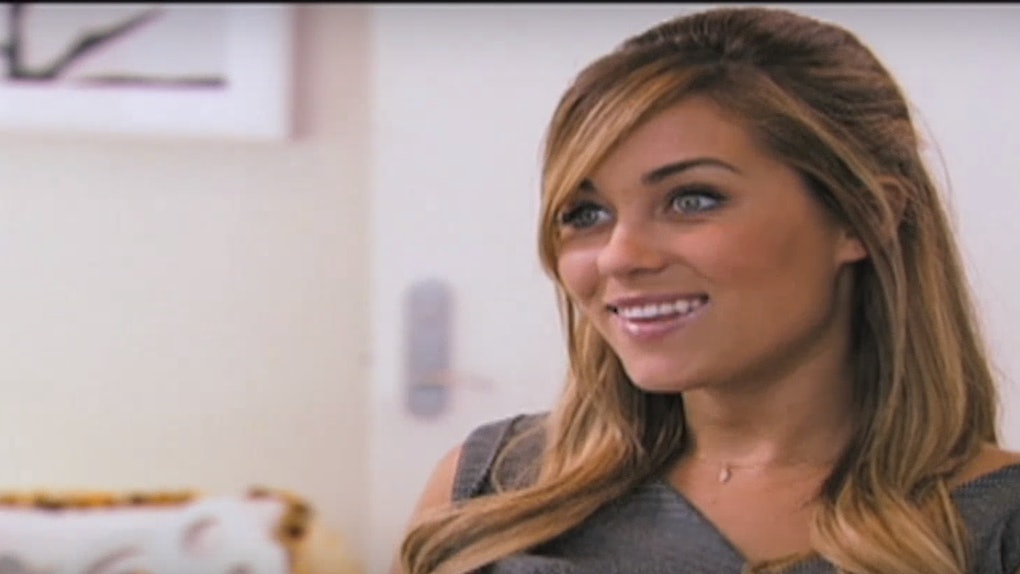 7 Secrets About 'The Hills' Even The Biggest Fans Don't Know

Now that we know so much of the truth about The Hills and what went down behind the scenes, MTV may have to figure out a new system for the filming of The Hills: New Beginnings. Stunted conversations and staged situations probably won't fly like they did back then, but no matter how the crew decides to revisit these people and their lives, nothing will quite match the awkward tone of "reality" we saw on The Hills. Just as much drama went down behind the scenes than on camera, so we've tracked down secrets about The Hills that even the biggest fans may have missed.

What I always forget about The Hills cast is that many of the cast members were already used to being on TV when the MTV series started in 2006. Lauren Conrad, Heidi Montag, Lo Bosworth, and Kristin Cavallari all appeared on 2004's Laguna Beach: The Real Orange County before eventually showing up on The Hills, but based on the mindsets the women have described from The Hills, the two experiences couldn't have been more different. The spinoff series reached a level of fame no one expected, and although you may've been totally obsessed with the show in your tween or high school years, life and a weakening memory have probably erased some off-camera dirt from your mind. So, what were some of the best kept secrets about the making of The Hills?

MTV first distinguished itself as a network for actual TV shows with The Real World, aka the grandfather of reality television. The format of strangers stuck in a house together always included a confessional room where contestants could vent without the production value of more formal confessional segments (think of the talking heads on Keeping Up with the Kardashians). It makes sense that MTV wanted this breaking of the fourth wall with The Hills too, but in 2016, executive producer Liz Gateley told Entertainment Tonight why the idea of confessionals didn't take off, saying:

The network got really scared that we weren’t putting testimonials in there. The audience didn’t really know what it was. They said, ‘Are these bad actors?’ or, ‘What’s going on?’... That’s where the editors also were our storytellers. We had the best editors in the business, and the best field people that caught things that we would’ve never been able to catch.

Admit it, you always thought it was a little creepy that Spencer Pratt and Heidi Montag hung out with their young neighbor Enzo on camera. He was essentially used as a prop whenever Heidi nagged Spencer about wanting kids someday, and after the show wrapped, Heidi confirmed that Enzo was basically just a tool to stir up drama. In an interview, she said, ""Obviously he was a child actor. He did a great job."

Well, maybe interacting with Enzo did help the couple embrace parenthood later on. In 2017, Spencer and Heidi welcomed their first child Gunner Stone, who joined the Hills cast at the 2018 VMAs red carpet on the night the reboot series was announced. Former Hills costar Jen Bunney is even Gunner's godmother, so let's hope we can expect plenty of dysfunctional family functions on New Beginnings.

At the end of Season 1, Lauren rejected an opportunity to go to Paris with Teen Vogue in favor of spending the summer with her high school boyfriend Jason Wahler. As much as we'd like to believe that it was mean old producers who convinced Lauren to stay home, the decision was entirely hers, despite producers wanting her to go to Europe. Lauren's title of "the girl who didn't do to Paris" reportedly came from Anna Wintour herself, who supposedly donned Lauren with the nickname when the Hills star came up in conversation. Despite not agreeing with Lauren's choice, Gateley admitted it made for great TV, telling ET:

[Creator Adam DiVello] really wanted to try to convince her to go, and she was adamant that she was not going to pursue an internship in Paris. We tried to convince her, but at the end of the day, she wasn’t going. That was an authentic moment to that [theme of] coming of age. It’s like, who doesn’t look back and wish they had gone to Europe for the summer? Or taken that internship in D.C.? Or whatever it was, because they stayed behind for a boy or a girl. I mean, everybody does that. It was perfect.

4. Lauren Got Paid The Most & The Rest Of The Cast Was Going To Demand For More Money

Unsurprisingly, Lauren's role as narrator earned her the most cash on The Hills, but if there was any driving force that inspired the rest of the cast to put differences aside, it was the desire for equal salaries. However, the group efforts to do so fell apart, and Lauren continued reportedly earning about $125,000 per episode in comparison to costars receiving $100,000 or less for each appearance. Heidi once told BuzzFeed:

Cast members did all make different salaries, so we wanted to do like Jersey Shore and unite together and all get a bigger paycheck, but everyone was a little bit too divided. I think that would've been the smarter thing for everyone to do at the time, but that's not what happened.

5. Spencer Was Actually A Gentleman Off Camera

To be fair, this claim comes from Spencer's mouth, but when the show wrapped, he revealed that MTV portrayed him in a far more villainous light than how he acted in reality. After starring on a short-lived reality show with Brody Jenner, Spencer wanted to avoid another cancellation once he ended up on The Hills and delivered such craziness on camera to ensure that the show had steady ratings. Meanwhile, when filming was through, he was "opening doors and going to the movies and cuddling." It's hard to trust anything that people claim is true about The Hills, but seeing as Spencer and Heidi have made plenty of post-Hills reality TV appearances, I'm a little more reluctant to believe Spencer's version of events. We'll have to wait and see if fatherhood has chilled him out on New Beginnings.

6. Some Cast Members Headed To Central America After The Show Ended

The Hills concluded in 2010 after six seasons, and the quick transition from filming to normal life affected some cast members more than they anticipated. Heidi and Spencer first left L.A. for Malibu, where they had heavy security, and then headed to Costa Rica for a few months. Heidi said of the location change, "It was hard because we didn’t really have our families and life was just a mess. It was really challenging adjusting from that high.”

Audrina Patridge's on-and-off boyfriend Justin Bobby Bresica also checked out of Los Angeles, spending several years in Nicaragua after the show finished. Note to self: if you ever need to escape after becoming a MTV star, look into Central American retreats.

7. Kristin Was Forced To Play The Mean Girl

Kristin stepped in to replace Lauren as the show's narrator in Season 5, ushering in an even more dramatic era of The Hills. Like Lauren, she had a fleeting romance with Brody and often clashed with the other women in the cast. Also seen in an overdramatic light on Laguna Beach, on which she was in a love triangle with Lauren and classmate Stephen Colletti, Kristin admitted that Hills producers wanted her to reprise her "mean girl" role. She told BuzzFeed, "MTV actually asked me if I was OK with them saying "the bitch is back." And I was like, "Yeah, let's do it. I'm coming back, let's make it big." I looked at it as a job and I was having fun so I was game for it."

More like this
Who Did Emily Poison? 'The Handmaid's Tale' Season 2 Is Off To An Intense Start
By Ani Bundel
In 'Riverdale' Season 5, Toni Topaz Is The Black Superwoman Without A Cape
By Erika Hardison
This Video Tour Of Disney World Reveals Cool Design Secrets Of The Magic Kingdom
By Lara Walsh
Stay up to date