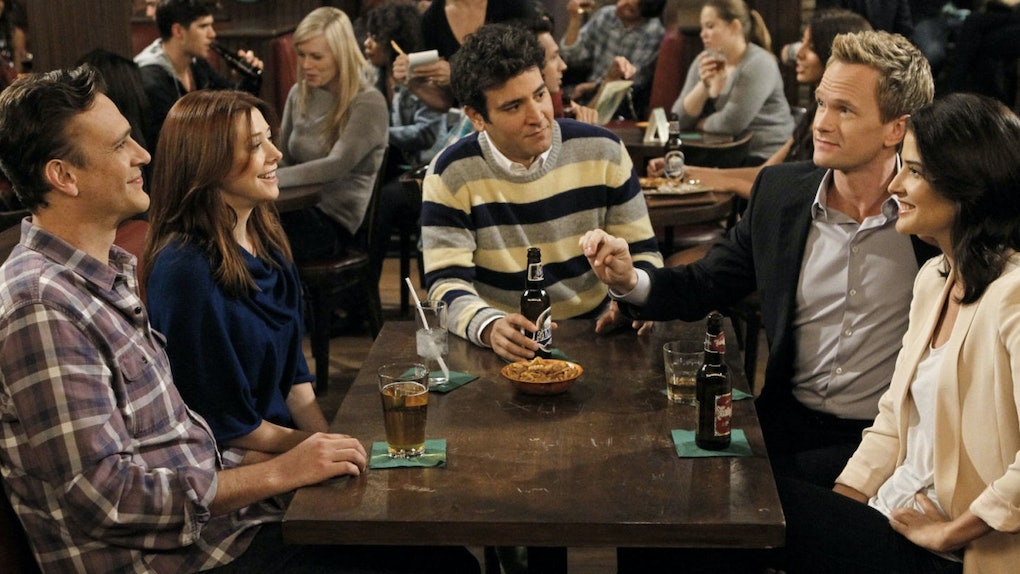 7 Secrets About 'HIMYM' That All Big Fans Should Know

It may have had one of the most polarizing series finales ever, but How I Met Your Mother is that show that I still can't part ways with even after that controversial finale plot twist. Its nine years of bar debates, slap bets, and "legen - wait for it - dary"'s solidified the show's spot among beloved sitcoms most likely to be airing a rerun at any point of the day. Even if you consider yourself a huge fan of the multi-layered story, we've dug up seven secrets about HIMYM that you may have never known.

Super fans definitely know the show's basic "secrets," like how the real-life spouses of Alyson Hannigan, Cobie Smulders, and Neil Patrick Harris all appeared on HIMYM throughout the series. The man behind Future Ted's voiceovers is no mystery either - who else was disappointed that Josh Radnor didn't morph into Bob Saget when the final flashforward began in the series finale? If you didn't know any of those tidbits, you may want to reconsider your true fan status.

The facts below are focused on more obscure stories that may have flown under the radar as the show originally aired. Besides the secrets we uncovered, how many more can you track down?

1. A Real-Life Wedding Proposal Was Shown In The Season 2 Finale

In the episode "Something Blue," Robin freaked when she found an engagement ring at the bottom of her champagne glass, thinking that Ted was trying to propose to her. The ring actually belonged to a couple eating at the restaurant table next to them, but those weren't actors pretending to get engaged. Brooklyn couple Jana Rugan and Timothy Russo were huge fans of HIMYM, and Russo turned to his comedy writer brother to help him plan out a trip to the show's Los Angeles set. His brother had a friend who worked on the show, and Russo's initial plan was just to surprise Rugan with a tour of the set. However, his brother suggested to Russo that he propose to Rugan while visiting the HIMYM lot.

In a New York Daily News piece about the couple's 2008 wedding, Russo said of his brother's idea:

I couldn't believe it, I was, like, 'What do you mean?' He said in the season finale, they were writing in a proposal, and had planned to use extras, so thought what a great chance to do it for real. The actors are sitting at the table and the woman says, 'Whose ring is that?' and the guy says, 'I don't know, it's not mine,' and then I get up from our 'extras' table and say, 'It's mine.' And then I walked over and proposed to Jana. At first she thought I was messing up the scene, then it dawned on her and she started crying and everyone was clapping. It was awesome.

Forget Barney's epic proposal to Robin - I need someone to propose to me on a TV set.

2. The Cast Didn't Film In Front Of A Studio Audience

Usually you can guarantee that any sitcom with a laugh track had a studio audience watching the cast work, but that wasn't the case for HIMYM. Because the narrative played around with time so much and frequently included flashbacks and flashforwards, it would have been too confusing for an audience to watch the process. I mean, can you imagine people trying to follow episodes like "Subway Wars" and "Brunch" out of context?

The show filmed in a silent studio because so many different timelines and perspectives required actors to revisit several scenes and shoot different sides of the story. Most sitcoms film an episode in a single day, but HIMYM often needed more time to complete one. This meant a longer production schedule overall, so the laugh tracks you hear throughout HIMYM are actually from audiences at episode screenings.

3. If The Show Was Cancelled Early On, Victoria Would've Been The Mother

Some of the controversy behind the HIMYM finale originated from the fact that the very last scene was filmed eight years before the series wrapped and before creators Carter Bays and Craig Thomas could have foreseen how their characters would change over time. So, while actors David Henrie and Lyndsy Fonseca filmed the final scene as Ted's kids circa Season 1, baker Victoria was the only non-Robin love interest in sight for Ted.

Apparently, the Mother dying and Robin ending up with Ted was always Bays and Thomas' plan, but Victoria would have become the Mother if HIMYM was cancelled in Season 1 or 2. As Ted's first major girlfriend in the show's timeline, Victoria came back later on in the series, fueling speculation that she was actually the Mother, but the creators (regrettably, TBH) stuck to their old outline.

4. Jason Segel Didn't Know How Lily Would Tell Marshall About His Dad's Death

In the Season 6 episode "Bad News," moments after learning that his fertility was in good shape, Marshall was hit with the bombshell that his dad didn't survive a heart attack. The conversation between Marshall and Lily is one of the show's most heartbreaking moments, but Segel went into the scene fairly blind.

Explaining the filming process to Entertainment Weekly, Bays revealed that Segel chose not to read any of Lily's dialogue in the episode's closing scene. He only knew the last word of her line, "He didn't make it," leading to him ad-libbing the scene's very last line. Bays wrote:

The moment Alyson stepped out, and she and Jason saw each other, it sort of made you marvel at what they’d spent five and a half years building together... As the last words of Lily’s line — 'he didn’t make it' — left Alyson’s mouth, I had to look away, as did our director Pamela Fryman. It’s our job to watch what happens, but in this case, what Jason and Alyson were going through was so unbearably real…we just had to trust that when we got back to the edit room it would all be in focus. (It was.) The last line in the scene was something Jason came up with in the moment. He said, “I’m not ready for this.” None of us were.

The couple's second pregnancy was briefly mentioned in Season 9, and a glimpse at their daughter Daisy was seen in a flashforward to the family's life in Italy. According to Hannigan, her own daughter was considered to play Daisy, but the creative team eventually cut her from the role because she looked too old to pass as the infant Daisy. Speaking to HuffPost, Hannigan said:

They fired my kid from that role. She was gonna be the baby, but [producer] Carter Bays was like, ‘Nope. She’s too old,’ and she got replaced. I was like, ‘You fired my child. First of all that’s ageism. I don’t think you’re allowed to fire her because she’s too old.'

6. Conan O'Brien Appears In The Background Of One Episode

You can spot the talk show host passing the gang at MacLaren's in the Season 7 episode "No Pressure." Although HIMYM was known for including some pretty epic guest stars every now and then, O'Brien requested a background cameo when he won a spot on the show via a charity auction. While talking with guest Neil Patrick Harris on Conan, O'Brien revealed that writers wanted to do much more with him:

The creators of the show were saying, 'We’re going to actually write you in as a character.' And I was thinking, 'No! I think it’s much funnier if I’m in the bar, in the background.'

7. The Original Description For Barney Was Much, *Much* Different

In an interview with The A.V. Club, Neil Patrick Harris revealed that Barney was originally written as a "Jack Black, John Belushi type." In his audition, Harris committed to his own wacky version of the character, even acting out Barney's love for laser tag and rolling all over the audition room. Harris revealed that he was called into the audition because he knew the casting director, but that his commitment to the role likely won him the part:

Reading the pilot to How I Met Your Mother, it's much funnier than most sitcoms, and not formulaic. So it was clever, but the character was written as a Jack Black, John Belushi type, so I thought, at 6 feet tall and 160 pounds, I probably would not be thought of as that guy. As it turns out, they just didn't have a real strong visual opinion of what the character should look like. I think they were fans of things I had done in the past, and I went at it with reckless abandon, which is what they were looking for more than a physical type.

I think I'm more than ready for a series rewatch after delving into the behind-the-scenes world of How I Met Your Mother. Challenge accepted!

More like this
Who Did Emily Poison? 'The Handmaid's Tale' Season 2 Is Off To An Intense Start
By Ani Bundel
In 'Riverdale' Season 5, Toni Topaz Is The Black Superwoman Without A Cape
By Erika Hardison
This Video Tour Of Disney World Reveals Cool Design Secrets Of The Magic Kingdom
By Lara Walsh
Stay up to date