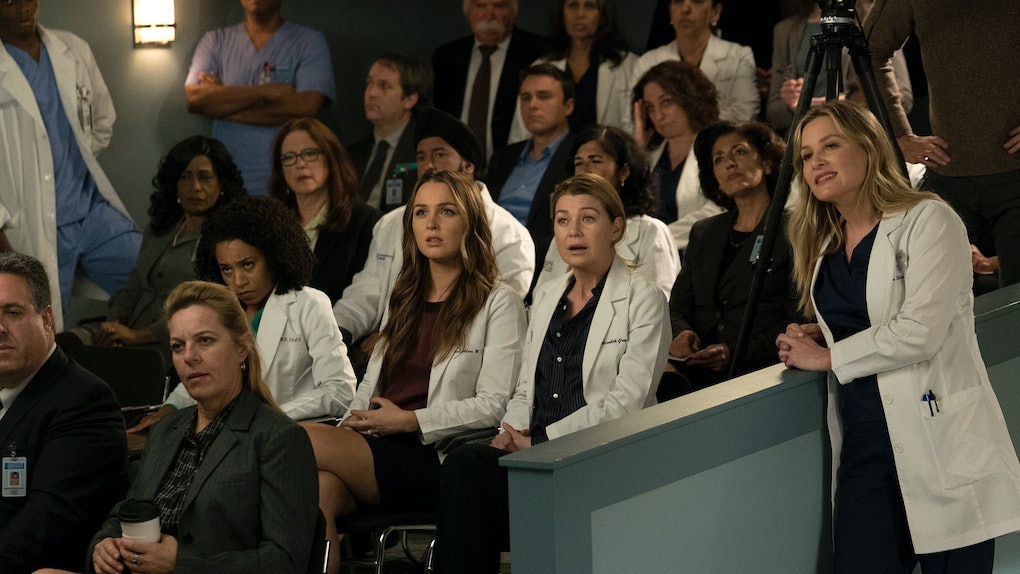 You'd be hard-pressed to find a show that has managed the long-running, ever-changing dynamics of Grey's Anatomy. The show is wrapping up its fourteenth season in the next few weeks, and there are no signs of it completely ending anytime soon. The success of Grey's Anatomy sparked a diehard following of fans that is always ready to call out a continuity error or list off the exact episode in which a character first appeared. Perhaps the most loyal viewer is already up to speed with all of the behind-the-scenes gossip, but we have the scoop on seven secrets about Grey's Anatomy even the most obsessed fans may not know.

No show can last more than a decade without experiencing its fair share of drama on and off screen, and these juicy tidbits prove that Grey's Anatomy is no exception to that rule. From little-known casting revelations to alleged tension between actors, I'm sure there are plenty of other juicy secrets that fans don't even have an inkling about. For now, I'll be busy Googling the fun facts below and trying to track down even more unpopular secrets. After all, what is a girl to do in the summer when Grey's Anatomy is between seasons?

Season 1 ended with the bombshell that Derek was married, but his past was originally going to be way more complicated. In a 2017 online television writing masterclass, Grey's Anatomy creator Shonda Rhimes shared secrets about early drafts of the show's scripts. Taking participants through her original 2004 pitch of the series, Rhimes revealed that McDreamy initially had a daughter with ex-wife Addison. The teenager was supposed to be the one who convinced Derek to work at Seattle Grace, as Rhimes wrote in her pitch:

This is his chance to make up for all the mistakes he made with her when she was younger. It's going to be far more difficult than he bargained for.

2. Meredith's voiceovers were originally her one-sided conversations with her mother

When the series began, Meredith's mother Ellis was already diagnosed with Alzheimer's, and she even sometimes thought Meredith was her old college friend. As Elle reports, the disease kept a wedge between the two until Ellis's death in Season 3, but whether or not she was always sick, Ellis could have received a close look into Meredith's thoughts as her daughter climbed her way up the hospital's ladder of success.

3. Rhimes envisioned Bailey as a blonde that Kristin Chenoweth was in the running to play

In an interview with Oprah Winfrey, Rhimes confessed that Miranda Bailey was the only character she physically described in the original script. As The Hollywood Reporter writes, Kristin Chenoweth was being considered to play Bailey as "a tiny blonde with curls." The no-nonsense character was even loosely based on Rhimes' mother. Speaking to Oprah, Rhimes said:

The script was written with no character descriptions, no clue as to what anyone should look like — except for Miranda Bailey. I pictured her as a tiny blonde with curls. I thought it would be unexpected to have this sweet-looking person open her mouth and say tough things. But then Chandra Wilson auditioned, and she opened her mouth and said those same things. I thought, 'That's exactly who Miranda is.'

4. Isaiah Washington actually learned how to perform all of his character's surgeries before filming them

In 2007, he was let go from the show after uttering a homophobic slur reportedly in reference to co-star T.R. Knight, but before his fall from grace, Washington was meticulous about his character Preston Burke seeming like a legitimate doctor. In the same interview with Oprah, Rhimes shared that he would actually learn how to perform each of Dr. Burke's fictional surgeries:

Isaiah Washington learns all his surgeries before he performs them on TV. Scarily enough, I think if he stopped at an accident on the street, he'd know exactly what to do. He has pulled shifts at hospitals where he follows the surgeons around for 48 hours.

5. Washington could have played Derek, but Ellen Pompeo wasn't into the idea

Ellen Pompeo and Patrick Dempsey are arguably one of the greatest onscreen pairings, but they almost weren't meant to be. Although his Burke ultimately ended up in a relationship with Meredith's BFF Cristina, Washington was originally going to be the main character's love interest and seemingly play Derek. Pompeo revealed to the New York Post in 2013 that Rhimes wanted to explore an interracial relationship, but the concept was too close to Pompeo's real-life relationship with African-American music producer Chris Ivery:

You know they wanted Isaiah Washington to be my boyfriend. Shonda really wanted to put a black man in the mix. I didn’t think they were really going to put an interracial couple on the show and I didn’t want him. It was too close to home. I said I wanted that Dempsey kid. I think that once Isaiah did not get the role it backfired [for him].

6. Rhimes first approached networks with an idea for a series focused on war

In her online masterclass, Rhimes spilled more about the inspiration for Grey's Anatomy. Initially, she wanted to do a series on war correspondents, even writing its pilot episode. But given that she was pitching such an idea in the early 2000s, network executives understandably didn't want to tackle that kind of story when the country was at war. Taking props from the high-intensity environment of her original idea, Rhimes concocted Grey's Anatomy, saying in her class:

I just liked that feeling—a bunch of overly smart people fighting for their space.

In her Grey's Anatomy pitch, she wrote of the characters in a hospital setting:

Like WarCor, there's that sense of being war buddies, of being different, of seeing the rest of the world as civilians.

Launching in September 2007, Private Practice brought Walsh's Addison to a job at a private practice in Los Angeles. The show lasted six seasons but never quite made an impact as big as Grey's Anatomy. While the attitude toward spinoff shows seems to have shifted in the decade since (we apparently have plenty of Station 19 and Grey's Anatomy crossovers in store), Grey's Anatomy cast members were reportedly very angry over the sudden news. In early 2007, TODAY reported:

The rest of the cast seemed instantly resentful of [Walsh]. They each thought they’d be the one chosen to get their own show, and now they’re giving Kate the cold shoulder. [Ellen Pompeo] seemed particularly peeved because she felt that, as the star, she should have been consulted. Things had finally settled down [after Washington's firing] and now everyone’s disgruntled again.

The first few years of Grey's Anatomy's run were pretty crazy, but it seems that recent years have smoothed out any tensions between cast members or bumps in creating a narrative.