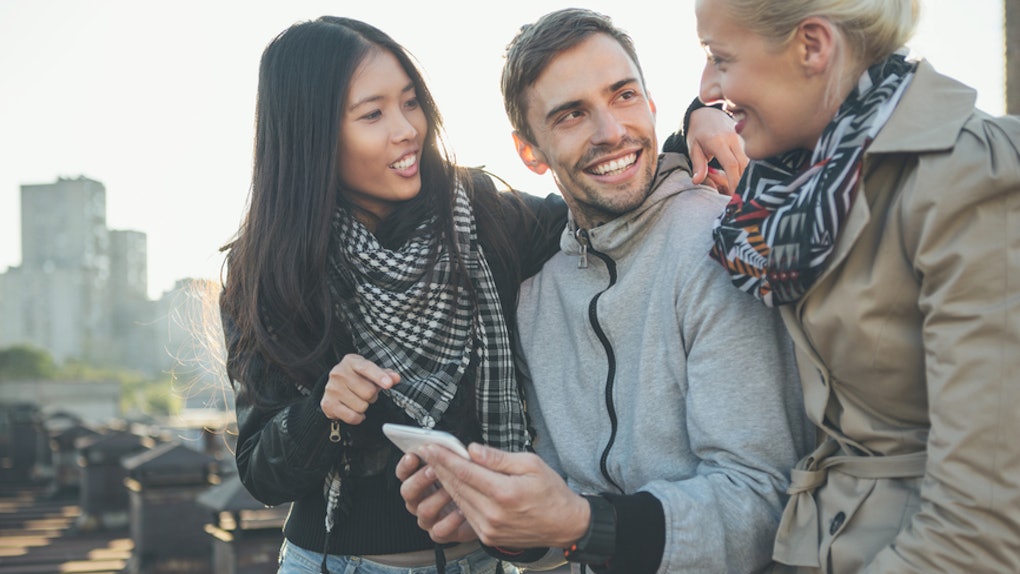 If you're into monogamy, the boundaries for your relationships are pretty clear. Don't kiss, sleep with, or get emotionally involved with anyone who's not your partner. But if you're in an open relationship or you're polyamorous (more on the difference between those below), those boundaries might not apply to you at all. If you're seeing more than one person, you have to create your own set of guidelines. Generally, the rules for open relationships and polyamory mandate open communication and honestly above all else. But beyond that, every person and every relationship can be a little different.

An "[open] relationship [is] where there's a primary partnership of two individuals and they can both have adventures, usually just sexual, outside that 'main' relationship," sexuality educator and social worker Aida Manduley told Elite Daily earlier this month. Meanwhile, Manduley says, "someone who's polyamorous may have an anchor family they live with, a steady sweetie in another state, casual hookup buddies in their town, and friends they 'swing' with."

Just to be clear, people who are open or poly aren't cheating. To do non-monogamy ethically, you have to practice honest, clear communication with all partners involved. Here's how seven people who are polyamorous or in open relationships discuss rules and boundaries with their partners.

This person wants to meet their partner's other dates.

Just let me meet the people you're with and that's good enough for me.

This person prefers their primary partner limits dates with other people to twice a week.

We have a two date per week rule unless prior permission is granted.

This person finds that their rules are evolving over time.

My husband and I are still very new to poly, so we're slowly taking down boundaries as we go. Our primary interest is in threesomes and moresomes, so initially we had a 'no solo' rule. It quickly became rather restrictive, so now we mearly strive to try and include each other in any sexy situations we get into. Just take it as slow as you're comfortable with and remember rules can change at any time, you just have to talk about them and agree. It is nice though when all of those sexy things that work in theory turn out to work in practice as well.

I doubt this would work for everyone, but our only real rule is: Be Honest and Forthright. In practice, we believe rules aren't really worth much. Safe sex practices, I believe, are generally implied. But, you know, if one of us didn't utilize them, it wouldn't seriously disrupt the relationship. Whoever broke it would just have to go get their *ss tested.

This person doesn't share their bed with anyone but their partner.

My partner and I have pretty standard "safer sex" rules and, as has already been mentioned in this thread, our partners have to inform us if they've slept with someone new so that we can make a more informed, consenting choice about sleeping with them.

Currently, we have a rule that our bed is ours alone, but not because of any sort of primary status. It is because currently, we share a bed, and it is his bed and space as much as it is mine. Normally, we would have our own bedrooms but circumstances have been such of late that we ended up moving into a one bedroom place for a while, meaning we can't have separate rooms where we can decide who to bring in when and do what with... So we decided that since it's shared space, we'd have to consent to people being in the shared bed, it's not just my bed to decide that with right now. As soon as we get a bigger place, though, we'll go back to having separate rooms and there won't be a need to discuss who enters the bed/room, just like we had in the past. Interestingly, this also means the cats don't sleep on our bed, since he doesn't like that, whereas I do. They slept with me when I had my own room, and will again when I do again, but just as with other humans, I have to respect that it's his bed, too, and so no cats.

So really, the rule stays the same (shared space is negotiated, personal space is up to us individually), it's just that for the moment, the bedroom is a shared space.

This person found that they cared less and less about certain traditional "rules" over time.

My ex-partner and i started out with rules but quickly realized that a lot of them were kind of silly to us or that we weren't bothered by particular things. for example, no spending the night, we would be each other's primaries, etc. we soon realized you can't put relationships in boxes like that - you just trust and be open.

When we negotiated, there was no fighting or heated talk. you are expressing your needs to continue feeling secure - this is important ESPECIALLY if you are just stepping out into the poly world. i think it's important for each need to be taken seriously and with understanding. chances are, the more comfortable you two become, and if you realize this lifestyle is going to work out well, i'm sure your list of rules will slowly become shorter and shorter. :) good luck!

This person makes their girlfriend a priority.

Me and my girlfriend have one rule. We can do whatever we want but no one is ever allowed to get between us. And its all worked out since.