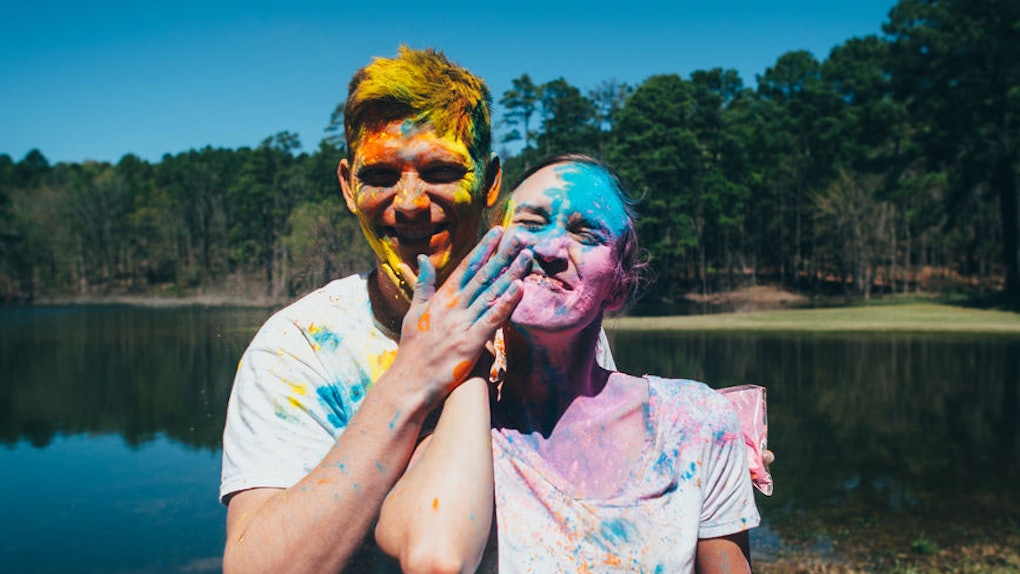 I love romantic comedies for one very specific reason: I can't resist a good meet-cute. You know, the ridiculous but adorable way two people bump into each other at the beginning of a movie? It's like when Matthew McConaughey's character saves Jennifer Lopez's from being crushed to death by a runaway Dumpster in The Wedding Planner. He turns out to be a doctor who can treat her injuries and, in a bizarre twist, she turns out to be his wedding planner. You can't deny that the path of a careening Dumpster is one of the funniest places to meet a boyfriend or girlfriend. Hopefully, they're not engaged to be married at the time, though.

I'd like to believe these things happen IRL, too. I mean, telling your friends and family how you met your significant other is, like, standard Thanksgiving dinner conversation. Messing this up would be just as bad as Rachel making half an English trifle and half a shepherd's pie on Friends. Plus, the tryptophan in the turkey is enough to put everyone to sleep without the details of your uninspired story dragging on in the background. All I'm saying is that when I show up to the family dinner this year, I better have an epic love story to tell with movie rights, plots twists, and an emotional soundtrack. Here are seven people who'll have no trouble bringing the drama.

That's one way to get into the holiday spirit.

There's an annual Jewish singles' dance held on Christmas Eve in various cities around the country. My mom went to the first-ever dance in 1987 when she was 23, and that's the night she met my dad. Especially after my cousin met her husband at the same dance in the 2000s, I grew up wondering if I'd one day meet someone there, too. I mean, family legacy, right? I went to the dance in 2016 when I was 23 — like my mom — and met a guy that I wound up dating for the next five months. If I'm being honest, I probably stayed with him a little too long just because it would've been such a cool story if we had worked out. Like mother, like daughter...

The couple that games together, stays together.

I met my husband on Minecraft of all places, I was around 16 and Minecraft was pretty new. I noticed a server called 'Skype club' so I joined it, there were a few people on that server including this annoying guy who kept messing up all my work. Eventually I got to know him and found he’s not as annoying as I thought (he’s worse lol) all jokes aside, we are now happily married and proud of our story. I love seeing how people meet their love though!

Do you believe in friendly ghosts? This Redditor does.

Aggie Cromwell did say, "Magic is really very simple. All you've got to do is want something and then let yourself have it."

Currently, I am seeing a guy who I crossed paths with twice before something stuck: once at a Halloweentown movie screening and once hosing each other off after a campus-wide paint fight that happens at our college every year.

Over the phone. Both she and her brother were living with their parents, I was doing business with her brother. Their father answered the phone and thought it would be funny if he pretended to misunderstand me and put me on the phone with his daughter instead of his son.

This is ~very~ dramatic.

We met at a Buffy the Vampire Slayer readthrough. We were doing season 7, my main character was Kennedy, his was Andrew. So for the first few episodes we were exclusively bit parts and for two episodes in a row he stabbed me to death. In the third he turned into a giant worm monster and ate my pet dog.

Playing Dungeons and Dragons which is always fun to tell older folks. I had moved to our city about six months prior. I went to a house party thrown by a coworker and got chatting with a different coworkers boyfriend about how I was new in town and still looking for hobbies and whatnot to fill up my time. He invited me to join as he was running a group for casual, beginner DnD players. I played 1-2 times in college and enjoyed it and so I thought, why not? Met my future SO there and I probably looked like a Looney tunes with my jaw hitting the floor and heart eyes popping out of my head. Extremely attractive, nice, and smart dude who has mutually nerdy interests and knows people in common with me? Insta-crush.

That said, I was very much the outsider in that group and I didn’t know if he was dating someone or what (spoiler alert: he was not and he was into me secretly too!). I got to know him over the course of a month and a half playing together (and developing an even stronger secret crush) before the opportunity presented itself - I decided to throw a big public birthday party for myself in a nearby bar, mostly so it wouldn’t be weird to invite him (and the rest of the group!). I did and we spent the whooooole night chatting to the point where he was like “this is your birthday party, don’t you want to go talk to your other friends?” Thankfully all my friends knew what was up.

We ended up having our first kiss that night, he asked me on a real date and planned it for the next week, and the rest is history! 4 years in May.

Also, we still play DnD together every Sunday although the group of other people we play with has changed a bit. It has become one of my favorite ongoing hobbies.

Yeah, these need to be rom-coms ASAP. I'll see you in theaters next summer.