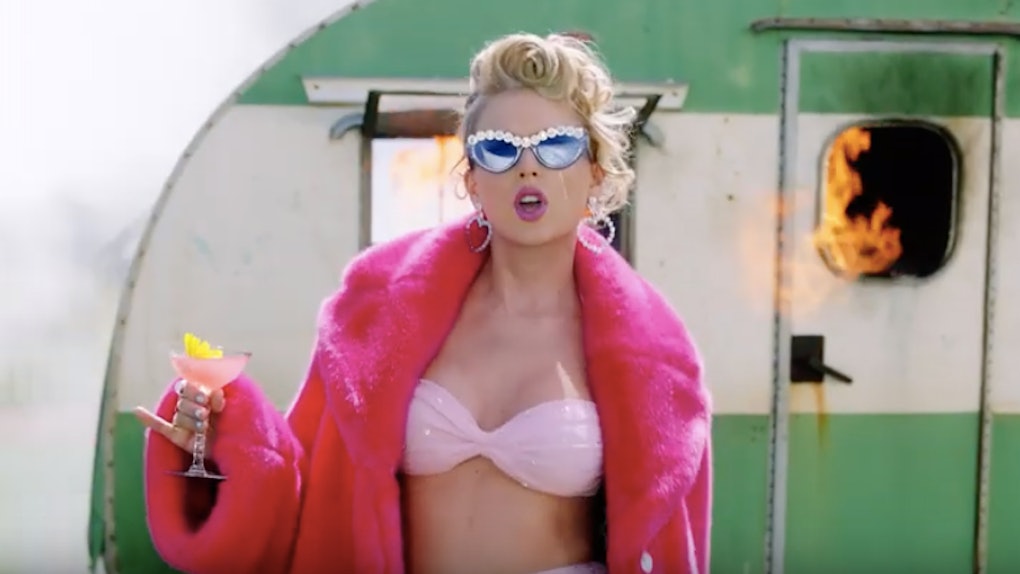 7 Easter Eggs From Taylor Swift's "You Need To Calm Down" Video, According To Fans

Mondays usually suck, so I'd like to thank Taylor Swift for swooping in to save the day like the musical superhero we all know she is. In case you somehow missed it, the pop star dropped the music video for her new Pride anthem "You Need To Calm Down" on June 17 and OMFG I can't calm down because it's legit amazing. For reals, you guys, I can't stop watching. This thing is packed with major moments like celeb cameos, a reconciliation with Katy Perry, and a whole bunch of possible new song name reveals. And of course, Swifties have already taken to Twitter to freak out and try to dissect it all. Here are 7 easter eggs hidden in Taylor Swift's "You Need To Calm Down" video that fans think may turn out to be titles of songs on her new album.

But first, let's start with the album name itself.

Swift hit up Instagram Live on June 13 to announce that her upcoming album would be called Lover, and that the release date would be Aug. 23.

She also shared the album cover over on her Twitter, and it had the exact same font as this phone case, which Swift tosses aside at the beginning of the video, only for it to then spark and catch fire.

FWIW, you can score one of these babies for yourself for $25 over on T. Swizzle's website. Flames not included, I hope.

This one is pretty self-explanatory, but when the video opens, Swift is lying in bed wearing a pink sleep mask that gives a not-so-subtle nod to the name of the song.

And yes, the song lyric sleep mask is available in the online store, too.

The "Mom, I am a rich man," print was hanging on Swift's bedroom wall when she first got out of bed, and like the phone case, it eventually caught on fire. Fans on Twitter are convinced that the quote — which Cher gave to Jane Pauley back in 1996 — will turn out to be a song title.

Here's the close-up shot of the flame-engulfed painting from the video:

And here is Cher's quote from the Pauley interview:

My mom said to me, 'You know, sweetheart, one day you should settle down and marry a rich man.' I said, 'Mom, I am a rich man.'

Legends supporting legends. If this turns out to be a collab I will legit start to cry. At least I won't be alone.

4. The bottle of "Pink Champagne":

Swifties know their queen doesn't put anything in her videos without reason, so many of them are convinced that this bottle of pink bubbly next to the blender is a hint that one of the tracks will be called "Pink Champagne."

Will it also turn out to be a collab with Drake, who goes by @champagnepapi on Instagram?

Some fans think the bowl of M&Ms visible in the frame is a sign that Eminem might be featured on the track as well.

While others are convinced that the cotton candy that Swift tears off and stuffs in the blender is a clear nod to Katy Perry.

I seriously don't know what to believe, but I am ridiculously excited by the possibility of any of these scenarios.

This one is probs the most obvious of them all. At one point in the video, Adam Lambert is shown giving Ellen DeGeneres a tattoo that says "Cruel Summer." Is this another possible song title? Pretty much everyone seems to think so. I mean, the phrase is even currently trending over on Twitter.

I don't know about you guys, but I'm really hoping that if "Cruel Summer" is a song on the album, it turns out to be a cover of the '80s Bananarama tune with the same name.

6. The "Love letters only" mailbox

Another possible song title hint hidden in the video is "Love Letters Only," which fans were quick to notice was written in red on the white mailbox in the rainbow trailer park.

And not only that, but some are convinced that it's going to be Track No. 5 and a collab with singer-songwriter Hayley Kiyoko.

7. The drag queens posing as pop queens at the "Pop Queen Pageant"

Finally, toward the end of "You Need to Calm Down," Swift starts singing about people who pit women musicians against each other. And while she does so, eight drag queens dressed up as Ariana Grande, Lady Gaga, Adele, Cardi B, Taylor Swift, Beyoncé, Katy Perry, and Nicki Minaj show up in a "Pop Queen Pageant" on stage.

So will "Pop Queen Pageant" be the name of a new song on Lover? Or will the album feature collabs with all of these incredible performers?

No matter what happens, I am loving Swift's message that every single one of us deserves a crown because we are all goddamn queens. It's pretty much positive vibes, pride, and empowerment all around.

I mean, if Swift and Perry can bury the hatchet, anything is possible.

Time to go grab a Happy Meal and watch this thing on repeat.