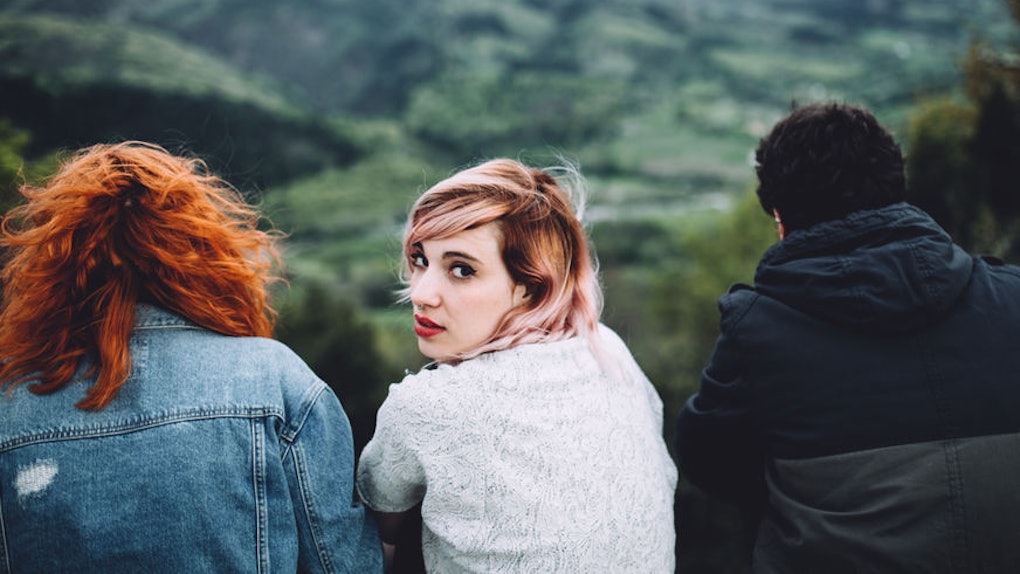 Usually when you're going through a breakup, the people you can turn to are your friends. They will be there to unequivocally take your side and give you all the "they were never good enough for you anyway" pep talks you need. But what about breaking up when you’re in the same friend group? Suddenly, things get a lot more complicated. For one thing, your support group is now personally involved, and it's going to be a lot harder for them to take a side. You can end up feeling both totally overwhelmed and emotionally claustrophobic, but also completely alone. Yeah, breaking up within your squad can be rough stuff.

But here's the thing: Like every other breakup, you will survive. You will be OK. Hearts will heal and life will go on... eventually. So, while your friends may not be able to be there the way they normally would in a breakup situation, just take comfort in the fact that you're not alone. Other people have been in your shoes and lived to tell the tale. If you're on verge of calling it quits on a relationship where you share friends with your soon-to-be ex, or if you're already in throes of a relationship that has recently ended, well, either way, here are the phases you can expect to go through before things get better. And yes, they will get better. I promise.

1. You’re unhappy in the relationship but dreading the end.

It all started off so promisingly! You were friends who became lovers — no way this could end badly. Everyone was so happy that you guys finally got together after all that drawn out sexual tension. It was a true love story, but over time (or maybe even suddenly), things changed. You've fought it all you can, but you just want out.

The only thing holding you in your relationship is your desire to not hurt your soon-to-be ex and, well, your entire squad’s feelings. You're terrified that this breakup isn't just going to split up the relationship, but your friend group, too. Ugh, this is going to get messy. Maybe you can just stick it out a little longer.

2. You break down and confide in your closest friend to gauge the fall-out.

You've decided you definitely want out of your relationship, but how bad will it be when you finally pull the plug? Surely everyone will understand, right? These things happen.

Nah, they're gonna freak out and you know it. It's time to break down and tell someone what you're feeling. Sure, you love your whole crew, but you reach out to your bestie — the only one you can really trust to keep this coming crisis quiet. You let them know how you're feeling and ask for advice. They're bummed, and not at all helpful.

3. You and your partner can't take it anymore and split up.

Welp, it happened. One (or both) of you finally broke the dam and said what you're feeling: It's over. Hopefully it was amicable and you both want to be friends. You agree not to divide the friend group, but TBH, you both know it's going to be really awkward for a while.

Word is out that the two of you broke up and everyone wants to know what happened. All you want to do is go full post-breakup fetal position and eat junk food, but instead you're fielding a friend press conference. A tidal wave of texts are blowing up your phone. Is it really over? Why though? Who cheated? Are we all still friends? Is there any chance you can work things out and get back together and we can all pretend this didn't happen? Eventually, you just have to disconnect and watch some freakin' Netflix.

5. Your friends are worried, so you have to reassure them.

Listen, I get it. Right now, the last thing you feel like doing is reassuring your friends, but they were invested in this relationship and they're a part of what your post-breakup life is going to look like. They need to know if you guys will all still be able to be friends, so, you tell them what they need to hear — that everything is fine. Even though, in this minute, everything really isn't.

Bad news: If your ex is still in your squad, you can't avoid them forever. Eventually, you're all going to be in the same room together and it's awkward AF. But that's OK. It's supposed to be, and you have some control on exactly how awkward it is. You decide just to act like everything is normal and hope everyone follows your lead. However, if they bring a date, you will burn this mother down.

7. Things slowly get back to normal.

It may have taken longer than you would have liked, but eventually things do calm down. Hopefully you all sailed the awkward seas together and the friend group is intact. But, if not, well... life is all about change and growing, and the ones who stick with you through the hard times are the ones who truly matter. Now, you're free to put the past behind you and start getting excited for the next romantic chapter in your life. But you've added a new deal-breaker to your list: No dating in the friend group ever again!

Breaking up with someone in your circle of friends is really, really hard, but you're a lot tougher than you think, and you will get through it — hopefully with tighter knit group of friends on the other side.