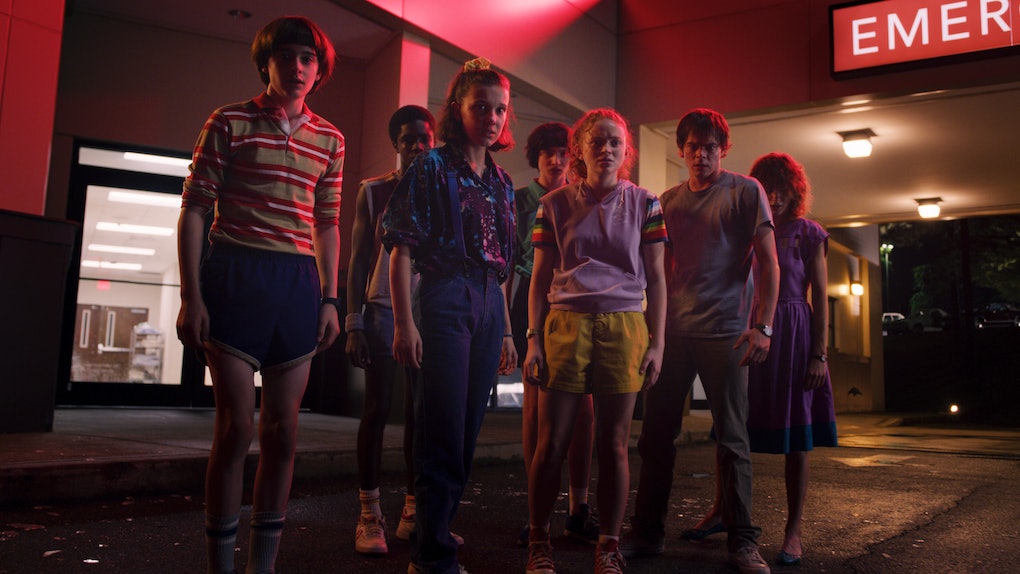 Stranger Things Season 3 went in a different direction from the first two seasons. It split up everyone's favorite characters into several smaller groups. Each group had one part of the larger puzzle, and by the end of the season, they came together to save Hawkins. But these individual sets of characters meant that there are several squads within the larger whole. Luckily for fans, it also means there are lots of Stranger Things 3 Halloween group costume ideas to pull from this holiday season.

In terms of group outfits there are six different squads to pull from, from the Scoops Troops to the adult gang. The only character who doesn't have a group, per se, is Billy, who is mostly a loner for the majority of the season. But his outfit is also super easy, if you're looking to add a "Billy" to your squad: It's a pair of red lifeguard shorts, a mullet wig. Pretty simple.

The best part about these outfits though, is how easily they can be for three or four groups to coordinate to make a larger whole from the Stranger Things canon. Small or large, there are plenty of Stranger Things groups to pull from.

The useful thing about the Scoops Troops is that two of the members are in sailor uniforms.

Dustin is slightly harder to pull off, partly because his 1980s look is so specific. But you can find his hat here, and then just add a jeans vest over a bright colored tee-shirt.

Don't forget Erica's pack of ice cream eaters! The point here is to be as rainbow as you wanna be. Think Lisa Frank in grade school form. And don't forget a helmet, for when it's time to commence Operation Child Endangerment.

For the boys, Mike and Lucas' looks are very specific. Mike's preppy yellow shirt and black shorts can be found here:

These shorts can work for both boys, in different colors.

This slim-fit chino short features a mid-length inseam for a versatile, casual look

And the point of Will is that he's in denial that he's outgrown childish clothes. But really, we all know everyone's going to wear his Will The Wise robes.

El comes into her own style this season, which can be best described as "1985 threw up on her."

Max is more rainbow in her wardrobe, with a purple sleeveless hoodie to fight against the cold.

Channel your inner MADMAX with this striped tee. Inspired by Max's shirt from season 3 of Stranger Things, there are red, orange, yellow, pink and blue stripes and a red ringer neckline. There is a skateboard patch on the left chest as a nod to Max's favorite hobby. Totally rad.

The look for Nancy and Jonathan, intrepid reporters, are "trying to look like grown-ups." Once you've nailed Nancy's perm, the rest of the outfit is easy:

For Jonathan, it's best to remember he probably shopped at a thrift store, so make the shirt oversized and the tie unfortunate.

FIT TYPE: Standard fit- relaxed through the body and sleeves

Hopper and the Hawaiian shirt is THE look from Season 3 from Stranger Things. You can find that shirt here:

As for Joyce, she's starting to go proto-grunge here, so make sure to tie a flannel shirt around your waist.