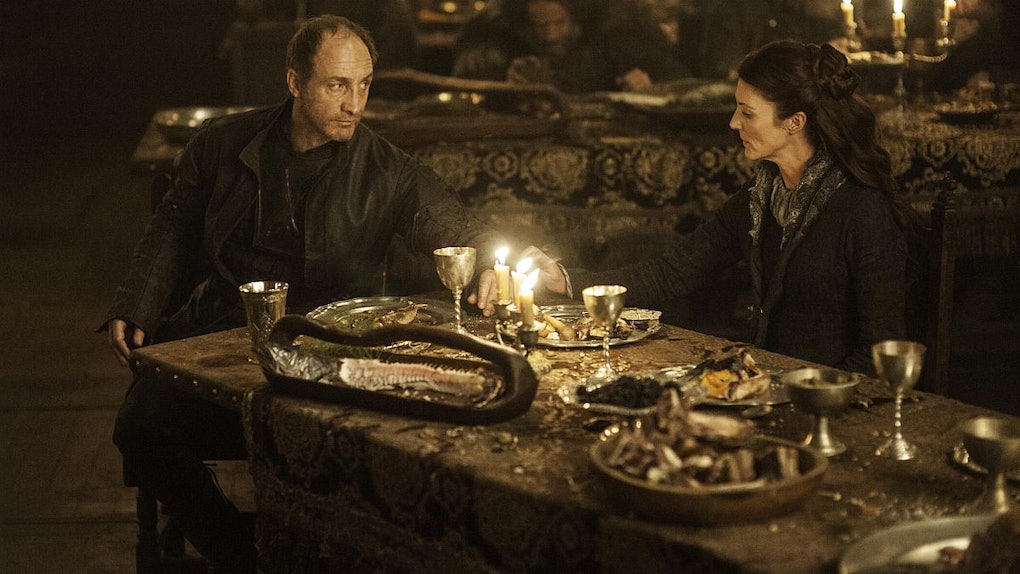 From the end of October to the end of December, it's one party after another. But when it comes to some holidays, responsibilities outweigh the fun. Thanksgiving has family trying not to talk about politics, Christmas has disappointing presents, New Years has disappointing dates. Halloween, on the other hand, has candy, scares, and themed get-togethers. No wonder so many people think it's the best holiday out there. If you're looking for a different spin on horror, why not throw a Game of Thrones Red Wedding Halloween party? These Game Of Thrones-themed Halloween recipes are perfect for anyone threatening to take their guests to Westeros, the scariest fantasy world ever invented.

There are tons of different ideas for Game of Thrones decor and Game of Thrones costumes, but George R.R. Martin's real love in the novels is the food. Some chapters go on for pages and pages about the feasts laid out before the characters, conjuring up scrumptious tables full of the most exquisite cuisine from the Middle Ages. There's even a cookbook, A Feast of Ice and Fire, to peruse for ideas. But these six easy recipes below are sure-fire hits to freak all your guests out that "The Rains of Castamere" might start playing at any minute.

The end of Game of Thrones Season 1 held two surprising twists. The first was when Ned was beheaded. The second was when the dragon eggs hatched. These cake pops are not just sweet treats for Halloween guests to get sugared up on, they're also a tribute to both the Stark and Targaryen catalysts that drove the series forward.

You don't have to be a Targaryen to love dragons. Even some of the Starks and Lannisters are captivated by these creatures. If you're looking for an excuse to serve deviled eggs, a party favorite, why not turn them into dragon's eggs? The above tutorial not only explains how Easter egg dying has trained you for this moment but also how to make the dragons themselves.

When Halloween ends, there's only one phrase that sums up the rest of the year: Winter is coming. But in Westeros, Winter has finally arrived, as the Night King's army has crossed south of the wall, heading for Winterfell. The best way to celebrate is with these White Walker milkshake shots, which can be made with or without alcohol.

There is always one guest at every party who is looking for the tray of healthy food. One assumes at Stark gatherings, this is totally Bran's role. So, why not provide the most Stark-like healthy option with Cauliflower steaks designed to look like Weirwood trees? As you can see from the tutorial above, even just plain, they have the correct look. Follow this recipe, adding paprika and red pepper seasoning and they'll be perfect.

Game of Thrones is known for the horrors that befall characters, but nothing quite takes the cake (or the pie) as the dish of cold revenge Arya serves to Walder Frey at the end of Season 6. A meat pie will be the star of your Halloween feast, even as your guests are double-checking their thumbs are still attached to their hands, and not part of the main course.

For a Game of Thrones dessert, there's nothing that can beat Sansa's favorite lemon cakes. I've actually made these from the Feast of Ice and Fire cookbook, and they are quick and delicious. No, they won't scare the neighborhood. But every guest will want to take one home, lulling them into a sense of security for next time.