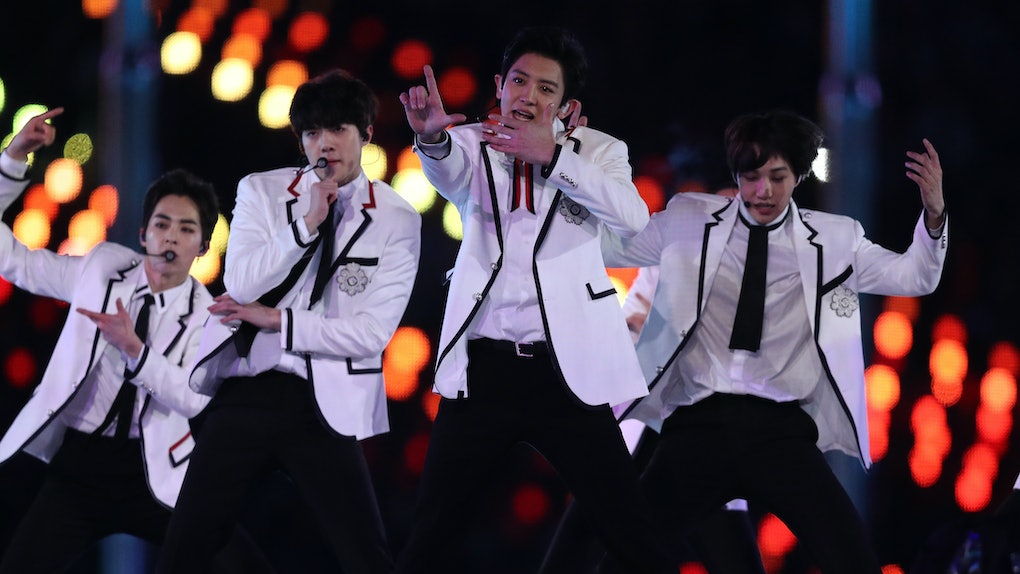 6 Facts About EXO, The K-Pop Band You Should Definitely Know About

Korean pop music is taking the world by storm and it’s doing it one K-Pop act at a time. While many of you K-Pop fans out there are swooning over BTS right now, there’s another K-Pop band that definitely needs to be on your radar: EXO. The band, which was formed way back in 2012 (yup, that's before BTS), has a slew of hits under its belt and it’s only getting bigger. If you haven’t heard of EXO before now, don’t worry, I’ve got all the juicy information you need to not only get to know the band, but to also learn to love them. So, here are six facts about EXO that you absolutely need to know.

1. There are nine (yes, nine!) members in the band

Most boy bands you're used to have somewhere between four and six members, each one appealing to a different subset of their audience. EXO, on the other hand, is everything but a typical boy band (though, perhaps more typical to the world of k-pop where supersized groups are common). In total, they have nine members. They include Xiumin, Baekhyun, Chen, Suho, Lay, Chanyeol, D.O., Kai, and Sehun. If you're confused about why the boys often perform with just eight members, it's because Lay sometimes doesn't participate in certain comebacks, but he's still in the band.

2. There used to be 12 members before they cut it down

You thought nine members was a lot? Well, believe it or not, EXO used to be comprised of 12 members. Three members, Kris (Wu Yi Fan), Luhan, and Tao, withdrew from the band amid legal disputes with their company, which is pretty unfortunate. But can you imagine a 12-member boy band? That’s like quadrupling One Direction! I can’t even begin to imagine the logistics of getting a group like that on stage!

Choose any song from EXO’s discography and you’re going to hear a really unique mix of rap, hip-hop, rock, and R&B. And every now and again, you might even hear an EDM-inspired track. Take “Power”, for example, which mixes all those genres up to create a really catchy tune that’ll get stuck in your head for days. Have a listen:

4. They performed at the 2018 Winter Olympics in Pyeongchang

Even if you think you haven’t heard of EXO before, you actually might have seen them perform if you tuned into the 2018 Winter Olympics. They guys put on an incredible show and really showed the world what they can do.

Here’s a look at their show-stopping performance:

5. They have different concepts for their albums

When it comes to EXO, each comeback has a special concept. For example, their latest album Don’t Mess Up My Tempo, which was released in November 2018, had a biker concept. Check out their album teaser that revealed the concept:

6. They're in the Guinness Book of World Records

All in all, EXO has some pretty interesting things going on and they’re definitely not your run-of-the-mill boy band. Are you stanning yet?