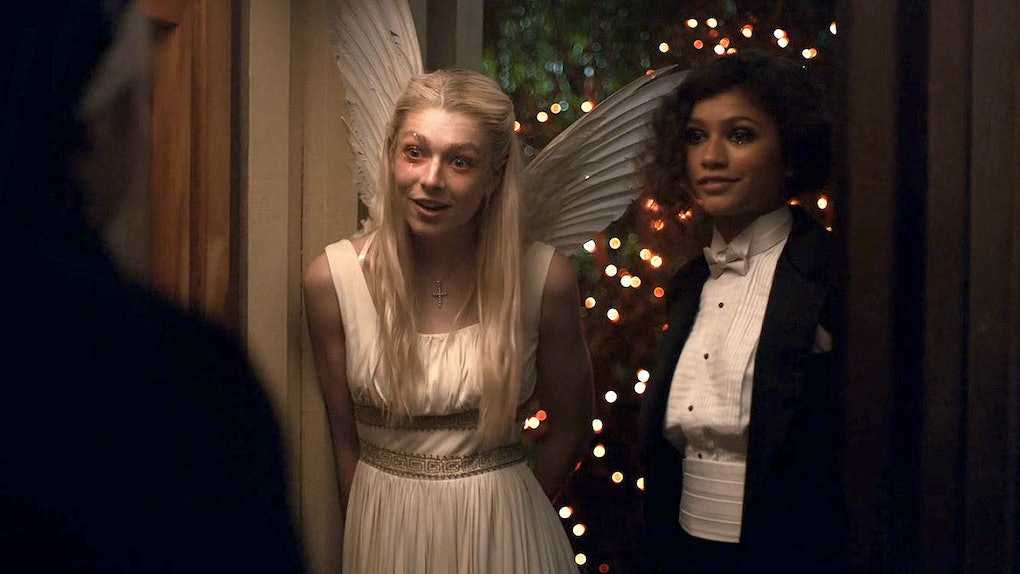 For some, Halloween is about looking spooky, but everyone who loves pop culture knows the holiday is actually all about celebrating the buzziest moments from the past year. In 2019, no new TV show made a bigger impact than the HBO teen drama Euphoria. The series not only captivated audiences with its shocking themes and no-holds-barred storytelling, but also with its fresh and inventive take on clothing and makeup. This all adds up to the absolutely perfect Halloween costume selection for this year. These Euphoria group costume ideas are sure to make your squad stand out from the crowd.

The best part about getting your group to go as the Euphoria characters this Halloween is that the costumes will work well both when you're all together and when you split off from the pack at a party. Since the show's characters are all connected with each other, your friends can each pick a character to go as and the concept will work no matter who stands next to whom.

Before jumping into the costumes, one of the most important things about dressing up as the Euphoria teens is the eye makeup. One of the most talked-about trends the series has sparked is bold, glittery, colorful eye makeup, so be sure to grab some eyeshadow and replicate the perfect makeup look. And then, of course, you have to choose which character you want to dress up as. Let's go over some of the options:

Rue totally defines schlubby-chic by effortlessly making oversized, dressed-down clothes look totally fashionable. Her favorite piece of clothing is her dad's maroon hoodie, which you can buy for cheap on Amazon.

Unfortunately, the Gosha Rubchinskiy oversized alien tie-dye tee that Rue wears is sold out (plus, it was selling for a whopping $131, which would obviously be pretty steep for a Halloween costume). But you can get another tie-dye tee featuring aliens without spending a ton of cash on Romwe.

Jules is definitely the most experimental of the characters when it comes to her eclectic style. Unfortunately, though, a lot of the stuff she wears is either super expensive or custom-made, so you will have to get a bit creative.

The purple buckled Opening Ceremony dress Jules wears at McKay's house party is no longer available in that exact style, and the closest alternatives are kind of cost-prohibitive at nearly $200. But don't worry; you can grab a purple mini dress that looks a lot like Jules' dress from Walmart for much cheaper!

The Topshop daisy print tee Jules wears with the dress is also currently sold out, but there is very close match available.

No character has been on more of a style journey than Kat, who began incorporating fetish-wear into her bold outfits to show off her newfound self-confidence. Her most iconic look is no doubt when she first debuts her radical new style at the mall.

You can get a very close replica to Kat's leather harness for just $20 on Amazon.

The sheer red top Kat pairs with the harness is available for even cheaper.

Maddy is a girl with expensive taste, so that means you might have to drop some coin to truly replicate her most iconic look: the revealing purple outfit she wore to the carnival.

The cutout top that Maddy wore is available for $41.

But those statement, cutout-filled pants that make the outfit Maddy's signature will require you to spend a bit more.

Maddy was not the only one to rock a memorable outfit at the carnival. Unfortunately, the buckled denim crop top Cassie wore was custom-made for the show, but you can get other denim crop tops online.

PrettyLittleThing has a perfect match for the pleated skirt Cassie wore with the top.

On top of Euphoria giving fans tons of fashion inspo with their chic, cutting-edge outfits, the series also featured a Halloween episode in which everyone donned their own costumes. If you are having trouble finding the perfect Euphoria look for your getup, maybe you can try one of theirs!

You can get a near-perfect replica of Kat's latex nun costume for just $45.

A very close approximation of Jules' angel wings sells for just over $20. All you need to complete her costume is to pair the wings with a white dress.

Plus, who could forget Lexi's Bob Ross costume? The silliest member of your friend group can get the most important element of Lexi's costume for just $20 from Spirit Halloween.

Of course, there are tons of other looks from Euphoria to draw inspiration from this Halloween, but these are just a few ideas to help you get your creative juices flowing, since we all know Halloween costume selection is no joke!