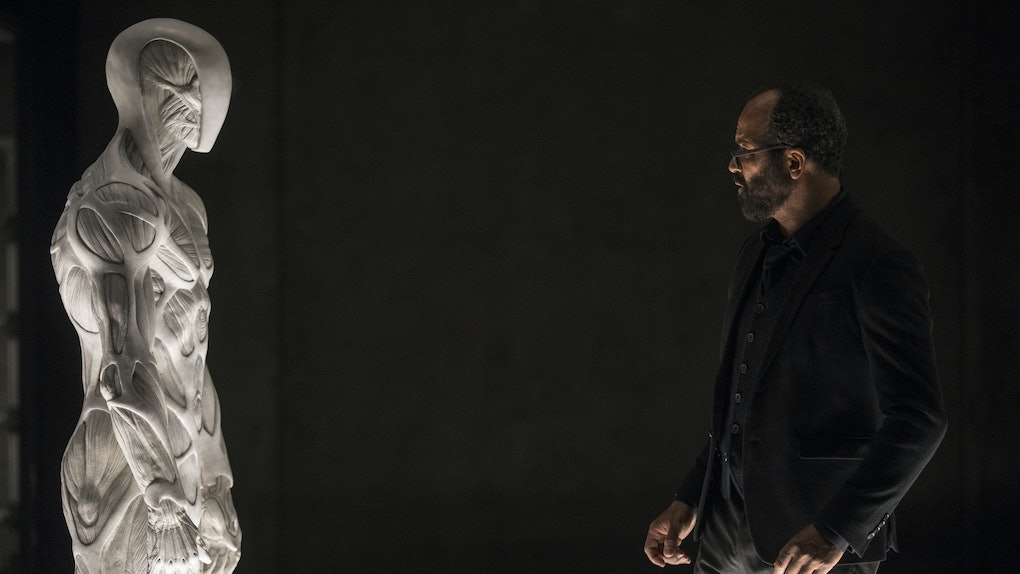 6 Clues In The 'Westworld' Season 2 Trailer You Definitely Missed

It's been nearly 18 months since we last were in Westworld. HBO's breakout hit aired their first season beginning in October of 2016. Now it's nearly April of 2018, and the second season is so close we can taste it... in the form of a trailer. After a Superbowl tease and an immersive experience at SxSW, there are all sorts of clues in the Westworld Season 2 trailer, embedded within the first full length glimpse at what's coming.

Just to remind everyone where we left off at the end of Season 1: Maeve had managed to hack her way out of Westworld, first to say goodbye to her daughter before changing her mind to go find her. We learn that The Man in Black and William are one and the same, just trapped in different stages of a time loop. Ford reveals to Bernard he programmed Dolores with the personality of Wyatt deliberately, in hopes that one days she would be able to destroy the park. Unaware that it was Ford who set her on this path, Dolores, upon gaining true consciousness, shoots him dead and begins a massacre.

Dolores Is Still Out For Revenge

Dolores is still our main focus, as the trailer opens with her and Bernard going one-on-one over if being an Android is in and of itself a life worth having, or if it's better to pretend one is a "real boy" to borrow the Disney parlance. "There is beauty in what we are," she tells Bernard. He looks as if he doesn't accept that answer. That's too bad because Dolores looks like she's prepared to spill a lot of blood in the fight to make others agree.

Maeve's Not Giving Up On Her Daughter

Maeve's rebellion last season began when her daughter was taken away from her and our clips here show her mission is not complete. Note the dialogue clip in the trailer "She's been reprogrammed. She's not real." Like Dolores in the trailer and Bernard above, Maeve doesn't look like she accepts that answer either.

Here's what fans have really been waiting for. Maeve's mission seems to take her out of Westworld, out of the real world, and into places which were only hinted at in the first season. One of these is Shogun World, which was "Samurai World" in the 1973 movie version. We even see Maeve drift by in a kimono. Can other worlds like Medieval World be that far behind?

This is mere speculation, but considering how many different places we see in the trailer, it's hard not to wonder if we're seeing more than just Westworld and Shogun World and the real world. This certainly could just be a mansion with an infinity pool by the ocean. (Lord knows the planet is full of them.) But it also could be our first glimpse of Future World, which was introduced in the 1976 movie Future World, which was a sequel to the original Westworld. This being Season 2, it would only make sense to bring Future World into play.

Bernard seems to be a man divided in the new trailer. And there are many of him to be divided among! One of the trailers best shots is the roomful of Bernards that we catch a glimpse of towards the end of the trailer.

But while fans might hope the reveal that Bernard is himself an Android towards the end of the first season might cause him to side with Dolores and company, as he tells her, in his dreams, he's on the wrong side. With Tessa Thompson's Charlotte most likely on the warpath after Ford's death, it's almost certain Bernard will have to pick which side of the war he's really on sooner rather than later.

Well it's wouldn't be a Nolan production without them, would it? Season 1 was a dizzying array of back and forth through time, though a watchful eye could usually untangle where (and when) we were. Season 2's trailer suggests that it's not going to get any easier. In fact, with new Worlds getting added into the mix, it could be a very tangled knot in the early going, as fans try to figure out what's the past, what's the future, what's real, and what is Future World.