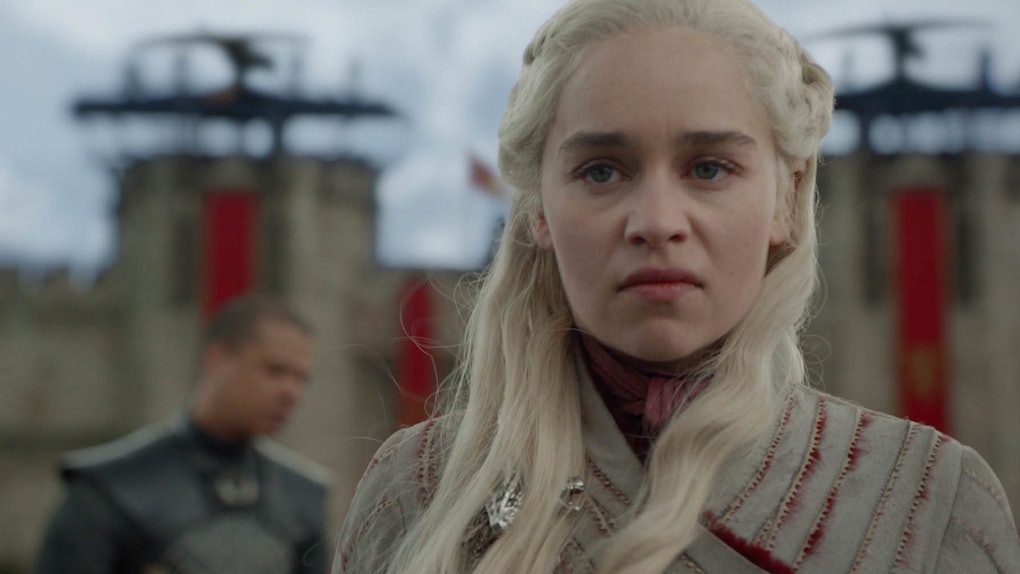 Daenerys Targaryen has been one of the most fan-beloved characters on Game of Thrones since the show began, but she has become much less popular in the currently airing final season of the series. Though she still seems to be the most likely character to take the Iron Throne, most fans also think that she will not get to keep the power for long as her death may come shortly afterwards. But nobody can agree on how Dany may meet her end. These theories about Daenerys' death on Game of Thrones could predict the big twist ending of the whole series.

Spoiler alert: This post contains spoilers from Game of Thrones Season 8 Episode 4, "The Last of the Starks." As everyone prepares for the big final battle against Cersei Lannister, all eyes are on Daenerys Targaryen. At the end of Sunday night's most recent episode, Dany was forced to watch her closest friend and advisor Missandei get executed at Cersei's orders. On top of that, she is still mourning the recent loss of two of her dragons, and the death of her longtime friend Jorah Mormont. It is no wonder that the last image we see from the episode is Dany's enraged face, teasing that she will bring some major firepower to the battle in the next episode.

But this intense rage along with some recent doubts among many characters about Dany's qualifications to rule Westeros have many fans thinking that she will die before the show ends. The real question that is left is who will be the one to actually kill Daenerys. Let's go over the most likely killers:

This seems to be the most popular theory right now, since Game of Thrones loves to turn romance into deadly betrayal and the oft-mentioned Azor Ahai prophecy includes a line about the prince having to kill the woman he loves. The theory goes that Daenerys will follow in the footsteps of her father and go mad with power once she seizes the Iron Throne, eventually leaving Jon no choice but to have to kill his girlfriend for the good of the kingdom.

Only a few people know Jon Snow's secret: that he is actually Aegon Targaryen and the true heir to the Iron Throne. Arya is one of them, and if Dany steps out of line, she is the Stark most capable of assassinating her in order to secure the throne for her brother.

Although Arya is definitely the most lethal Stark, Sansa is the one who seems to hate Dany more than anyone else. The most recent episode showed Sansa grappling with Jon's secret, and she even suggested that Jon would be a better ruler than Dany to Tyrion. Plus, Sansa has learned some deceitful ways to kill people from her time with Cersei, which we may see her put to use before the series ends.

Both of Daenerys' close advisors had a long debate about whether or not they still believe Dany should be queen after finding out about Jon's claim for the throne. In the end, either Varys or Tyrion may have to take lethal action if they decide that Dany turned out to be the wrong choice for ruler.

These seem to be the least likely of the theories, since most fans predict that Daenerys will defeat Cersei and claim the Iron Throne before her death, but there is still a chance that Dany could be defeated in the battle at King's Landing. Or, Jaime may go after Dany as revenge for killing his sister, if that winds up happening.