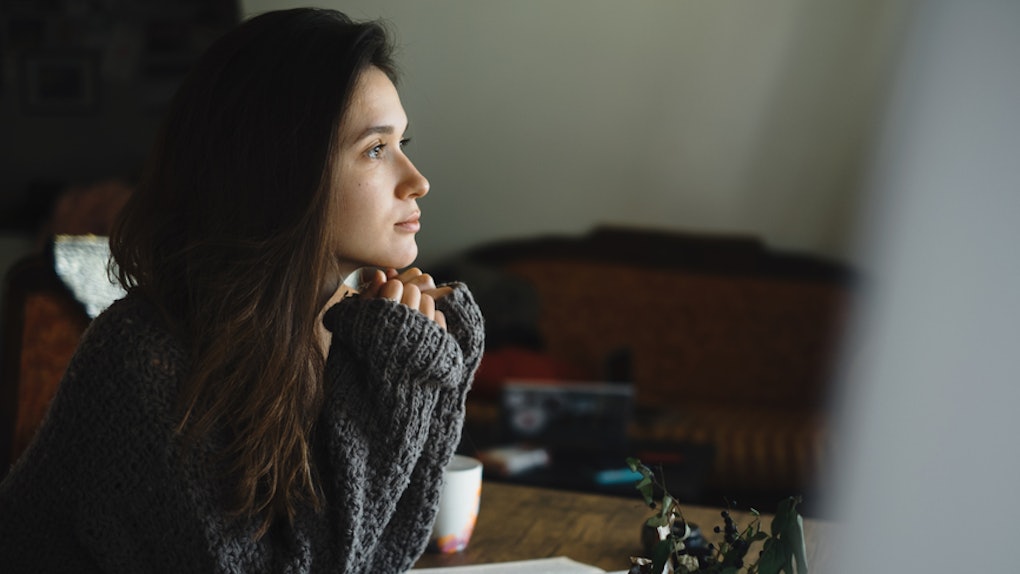 5 Signs You Overthink To The Point Of Exhausting Yourself, According To Experts

Hi, my name is Julia, and yes, I will be analyzing every bit of this conversation when it ends. OK, I’m exaggerating — well, sort of. Overthinkers, such as myself, are prone to pick apart everything, down to the smallest details of conversations, events, and even body language. Of course, it’s normal to think about things; humans are naturally curious beings after all, but when there are blatant signs you overthink situations too much, you might want to take a step back and think about why you overthink, what it’s doing to you mentally, as well as physically, and ways you might be able to relax a bit.

Please forgive me, because if you’re someone who overthinks to begin with, then it’s likely I’ve started a vicious cycle in which you’re overthinking the fact that you’re an overthinker (yes, I am aware at how incredibly meta this all sounds). Being a strong critical thinker isn’t a bad skill to have; delving into a winding thought process is only an issue when said issue becomes a fixation.

You've probably heard the saying, "It's not what you say, it's how you say it." Well, the same can be applied to how you think. It's not what you think that's the problem, it's how you approach the subject, and how much time you spend inspecting each minute detail of things you most likely couldn't change, even if you wanted to.

Maybe you don't even realize you're the dictionary definition of an overthinker, and you might assume that it's totally normal to feel at war with the inner workings of your mind every five seconds. Well, I'm here to tell you to chill or be chilled, because overthinking typically does more harm than good, and you're better off knowing when you're getting yourself worked up and how to stop it before things get worse. Here's how you can tell if you're overthinking things to the point of completely exhausting yourself.

1. You Start Buying Into Your Own False Assumptions

Let me tell you, friends, I know this sign all too well. People who overthink are really good at getting under their own skin because they spend so much time in their own head.

Even though it can be a hard habit to break, talking through a series of events with a friend or family member — instead of just analyzing the situation over and over again in your own mind — can be super beneficial, because they'll likely offer a perspective you haven't yet considered. When you're hyper-aware of your own thoughts and assumptions, it's easy to persuade yourself that something's going on when, really, it's just your imagination running rampant based on similar experiences you've had in the past.

To put this into perspective, doctor of psychology and licensed clinical social worker Dr. Danielle Forshee, LLC tells Elite Daily this is similar to when you start a new relationship with somebody, friendly or romantic, and strike up a conversation via text: Instead of reading the back-and-forth without putting your own spin on what emotions they're using on the other side of the phone, you probably "come up with multiple different reasons why the person may have not responded as quick as usual, may not have responded as detailed as usual, may not have put an emoji, or question what an emoji might mean."

Granted, this is pretty normal, because that's what we've all become accustomed to doing when it comes to communicating over text, but the way you interpret, view, and think about situations cannot always be based on prior experiences or assumptions, because it's not fair to you or the other people involved.

2. You Start Feeling Anxious About Everything

Have you ever noticed that, even if you're not someone who analyzes every little thing, any time you do overthink something, you rarely, if ever, do so in a positive way? Clarissa Silva, a behavioral scientist and relationship coach, tells Elite Daily that overthinking is often characterized by "excessive [thoughts] and worrying."

According to Silva, the act of overthinking is, more often than not, a completely vicious cycle that ends in a whirlwind of distress, and so many branches of thoughts that you simply don't know what to do with. "This can become destabilizing self-doubt," she explains, and it can potentially "put you at risk for mental health problems and emotional distress" in the long run.

To combat this toxic train of unnecessary thoughts, Silva designed what she calls the "Your Happiness Hypothesis" method, which involves challenging your thoughts by "using the same thinking that created the negative [thoughts] to create a positive perception." By changing your inner dialogue, you can better access the situation and "realign your thoughts with your desired outcome."

For example, let's say your date is running late for some reason. Rather than build up some dramatic situation in your mind where your beau got caught up chatting with that cute receptionist at their job, realign your thoughts to explore other potential, more realistic options: They got caught up with a project, or there was traffic holding them up. The goal is to re-evaluate your thoughts so that they are less outrageous, and much more rational.

You might think you're great at multitasking, and that might be true, but when your mind is focused on one thing and one thing only, it can be hard to accomplish other, sometimes even more pressing tasks, like finishing a presentation for work or writing a term paper.

Samantha Dutton, Ph.D., MSW, program director in social sciences at the University of Phoenix, tells Elite Daily that overthinking drains the mental resources you have to finish projects, work, or even spruce up your living space. "By focusing on one big project or decision," she says, "you neglect the daily living or other necessary tasks."

The solution, she explains, is to give whatever it is you're overthinking about the necessary attention to work through it, but once that's situated, file it, and move on.

Considering how much back-and-forth and evaluation goes into overthinking, you might as well be arguing with someone aloud. Dr. Sherry Benton, founder and chief science officer of TAO Connect, explains that, because overthinking involves things like character analysis, defensiveness, and a series of "I wish I had" patterns of thought, the activity is both unhelpful and ultimately leaves you feeling exhausted.

On that note, Dr. Benton tells Elite Daily, because most things you probably fixate on are conversations or events that happened in the past, there are two steps to take: First, ask yourself if there's anything you can do to change what's already been done. Then, "define the problem, brainstorm possible solutions, evaluate these alternatives, make a plan, implement that plan, and evaluate the results," she explains.

5. You Start To Feel Physically Worked Up

At the risk of sounding like a broken record, analyzing a situation is normal. Replaying said situation in your head over and over again, until you've come up with every possible way it could have ended, is toxic. Making a habit of this can mess with your mental and emotional state, but once stress and anxiety take over, it's only a matter of time before your physical body becomes a victim, too.

According to Dr. Forshee, your body is able to pick up on when your mind is experiencing distress, and will ultimately start to react physiologically. Things like "increased heart rate, increased breathing rate, and, essentially, feeling amped up," she says, occur as a result of the undue stress you're thrusting onto your body as a whole. Trust me, you do not want to let it get to this point.

The trick, Dr. Forshee says, is to sit down and reflect on your thoughts, rather than allow yourself to react so intensely. This will help you catch your breath and rationalize what your psyche is imagining, versus what's actually happening. Also, checking in with a friend can be beneficial, as they might be able to offer up some third-party insight to the situation.

Take a deep breath, girl. It's all going to be OK.