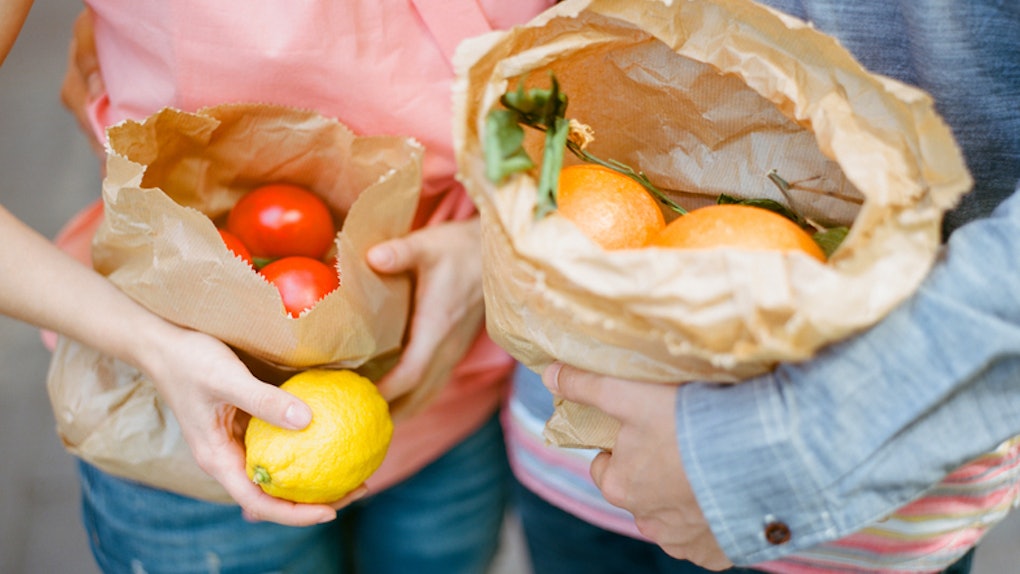 5 Myths About Going Vegan That Sound Believable, But Are Totally False

The food industry is experiencing a major shift these days, as diets are a dying trend (thank the lord), and all-around healthier ways of eating are finally catching on. Viral documentaries like What the Health and Cowspiracy have sparked intrigue, and you may have noticed yourself or your peers either cautiously dabbling in or even diving headfirst into that #veglife. Still, there is a decent number of myths about going vegan that have people impulsively giving into the trend or shunning the lifestyle altogether — and either could be for the wrong reasons.

Nov. 1 is recognized as World Vegan Day and kicks off World Vegan Month as well, according to The Vegan Society. Yes, it's a little ironic that Turkey Day just so happens to share its special time of year with veganism awareness, but I digress.

As someone who grew up in a traditional omnivorous household, I’ll be the first to admit that going from meat-eater to plant-based overnight wasn’t easy. Committing to a strictly vegan lifestyle is even more difficult, and half the battle is doing the research.

Many people are quick to assume lots of things about vegans, like, for example, that they must be super healthy, Whole Foods-obsessed snobs. While there definitely are pros and cons to the vegan lifestyle, there’s good and bad in all ways of living, but you shouldn’t dismiss or commit to a culture based on rumors alone.

So, here are a few common myths about going vegan, officially debunked once and for all. Whether you're considering going vegan yourself or have sworn off the lifestyle entirely based on he-said-she-said, you can at least make an executive decision for the right reasons.

1. The Vegan Lifestyle Is The Healthiest Lifestyle

I watched a friend in college transition to veganism, and I was so impressed. I will shamelessly admit that I stalked her social media regularly to see what she was cooking, because I just assumed that a person who only eats fruits and veggies must be leading that #HealthyGirl lifestyle with little to no effort. And while she definitely posted some delicious-looking meals, the girl wasn't giving up sweets (as she shouldn't, because balance is key, people).

"Veganism does not mean you will be healthier than those who consume animal products," Sarah Brown tells Elite Daily. The clinical nutritionist, certified Gut and Psychology Syndrome (GAPS) practitioner, and co-founder of Bonafide Provisions went on to explain that that, in her experience working with vegans, she's come across cases of mental fatigue, bloating, digestion issues, and low cholesterol — all of which are issues that can happen to anyone, no matter what diet you follow.

Too much of anything is a bad thing, and FYI, just because you're laying off meat products doesn't mean you're also turning your back on refined carbs, sweets, and #ThirstyThursday happy hours. One quick internet search can lead you to the best vegan junk food and fast-food restaurants. French fries are vegan, Oreos are vegan, even some flavors of Doritos are vegan. Every way of eating, even veganism, should be followed with the importance of balance and moderation in mind.

2. Being Vegan Is Expensive

Just because someone is vegan doesn't mean they exclusively shop at Whole Foods for their staples. Specialty items like certain meat and dairy substitutes can definitely add up — as can fine steak and seafood. It's not that vegan food is necessarily more expensive than an omnivore's meal; the difference is vegans simply shell out their dollars for items meat-eaters normally wouldn't.

According to Dr. Robert Graham of FRESH Med at Physio Logic NYC, there's no reason a trip to the grocery store should cost vegans significantly more than meat-eaters. He tells Elite Daily,

Beans cost a dollar per pound, that’s a lot cheaper than beef, chicken, and pork by the pound.

Here are a couple of quick pro tips if you're thinking of going vegan: Shop for produce that's in season to save some cash; buy things like rice, beans, lentils, canned goods, and pasta in bulk; and make a detailed grocery list so that you're not tempted to splurge on a food item you either don't need or probably won't eat before it goes bad.

Ugh, this common myth is like nails on a chalkboard for every vegan.

Listen, it's a very common misconception that humans can only get a proper portion of protein from animal meat. This, I've come to find, is 100 percent not true.

Now, I'll admit, upon going vegan myself, I was highly skeptical of this as well, and had to ask questions and do the research. On an average day before switching up my diet, I'd eat eggs, chicken, beef, pork — I hardly ate beans unless they were sneakily tossed into a recipe or served as a barbecue side dish. Aside from chickpeas and protein powder, I had virtually no idea how vegans got their protein. But the truth is, protein is virtually everywhere if you pay close enough attention to food labels.

Dr. Graham tells Elite Daily that, shockingly, zero studies have confirmed that there's an added benefit to meeting the routinely recommended minimum requirement of 42 grams of dietary protein per day. So, rest assured, vegans definitely don't have trouble getting their protein in.

4. Vegans Can Eat Whatever They Want In Large Quantities

Circling back to that "everything in moderation" bit, vegans have their limits, too — just like omnivores.

I'm not saying that no vegan has ever gone over their limits, or that when you watch a vegan YouTuber's "what I eat in a day" video diary that you won't be mind-blown by just how much food they may consume. How much someone eats ultimately depends on what their individual body needs in order to thrive, so if you go for seconds or even thirds of that loaded pizza, don't be so surprised when a plant-based eater serves themselves another bowl or two of quinoa salad.

The rumors are true, friends, and I can attest: Lettuce is not all that satisfying — at least, it's not if you only pick at a few leaves. But nothing, not even meat or dairy products, can be considered "satisfying," unless you eat enough of it to curb your hunger.

My dad is a real meat-and-potatoes kind of guy, so when I'd be packing a salad for lunch, he'd always give me that skeptical side-eye and ask whether it would be enough for me. For the record, my dad is super supportive of my plant-based lifestyle, but for him, meat is what makes a meal filling.

"A plant-based diet, like any other, involves a little preparation," Levitt tells Elite Daily. "As long as you stick to whole foods and make sure you’re eating enough protein — and enough items throughout the day — you may be surprised to discover just how satisfying a plant-based diet can be."

Alone, vegetables feel more like snack foods than satiating meals, and it can be hard to find the right balance when you start following a plant-based diet. It may feel somewhat limiting initially, but trust me, it opens up a world of delicious opportunity when you start getting creative in the kitchen.

More like this
The TikTok Recipe You Should Try, Based On Your Zodiac Sign
By Chelsea Jackson
The Trendiest TikTok Recipes Of All Time That You'll Want To Taste With Your Buds
By Kelly Pau
12 Best Mother's Day Brunch Delivery Gifts That Mom Will Love A Waffle Lot
By Rachel Chapman
Stay up to date