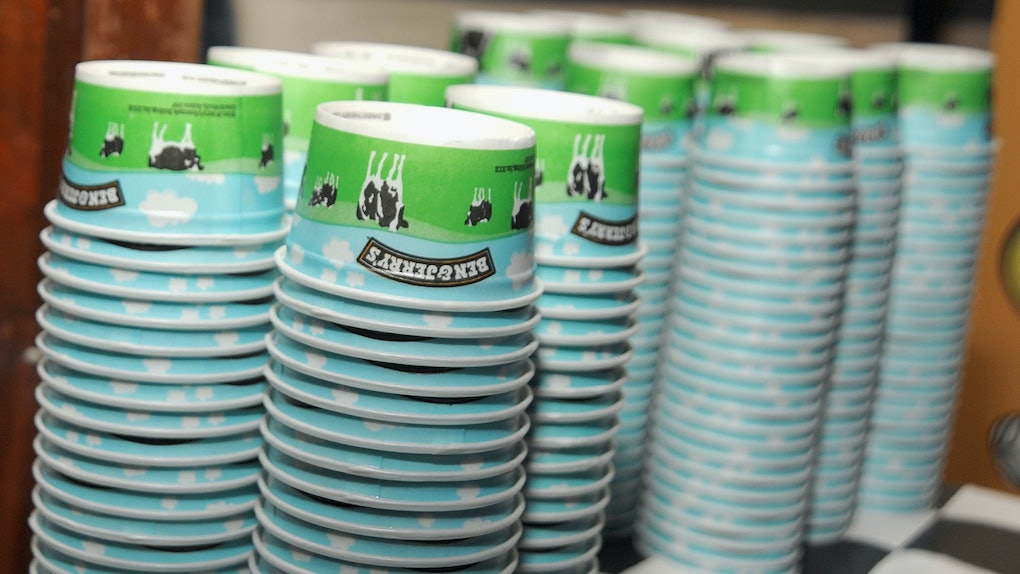 Ahh, it's mid-July, I'm sitting on my roof, and I'm trying to plan out every weekend through the end of September to soak up every last bit of that sweet, sweet summertime weather. Whether you're planning on hitting up the beach, going to the park, or hiking some gnarly trails, there's nothing better than just being outside, enjoying the nice weather, and indulging in that last bit of highly-anticipated free time. However, if you're more about sitting on your couch next to the cool air conditioning, try some of Ben & Jerry's flavors that taste like summer... you'll most definitely be glad you did.

Don't get me wrong — summer is the best season — no ifs, ands, or buts. However, the heat can be absolutely intolerable. You feel relentlessly sweaty, maybe kind of sunburned (if you're a fellow pasty person), and you might be hoping that winter ends up coming around sooner than later. Like, some people prefer sitting in their air-conditioned apartments rather than venturing outside, and that's totally fine! No judgement here. However, you'll probably at least want a taste of glorious summer, and so many of Ben & Jerry's ice cream flavors evoke the flavors of fresh June sunshine, picnics in July, and beach trips in August. Make sure to try all of them before summer ends, though, because there's no point in waiting. They're almost too good to be true.

Gimme S'more! is Ben & Jerry's latest and greatest s'more-flavored ice cream, which will literally make you feel like you're sitting next to a roaring campfire, telling all of the greatest scary stories from your days at sleep-away camp. The tantalizing base of toasted-marshmallow ice cream is laced with chocolate cookie swirls, graham cracker swirls, and, of course, fudge flakes. It tastes like you're sitting at a campfire without actually being there, so for the non-woodsy types, it's a straight-up godsend.

Maybe I'm old-fashioned, but in my book, Cherry Garcia will forever be a total classic. Now that it's summertime, cherries are an in-season treat, and Cherry Garcia tastes like a damn picnic in the park. Flavored with a refreshing cherry ice cream base, it's mixed with a medley of rich chocolate chips. Cherry Garcia is the perfect summer treat if you don't feel like jogging all the way to Prospect Park, and let me tell you, it's a definite must-have.

Maybe you've always dreamed about hiking, but once you get to the trailhead, you're sweaty, tired, and wish you never left your bed. If you feel that, it's totally OK! Ben & Jerry's Glampfire Trail Mix pretty much brings the taste of the trails to you. The base consists of chocolate ice cream, which is laced with salty pretzel swirls, sweet marshmallow swirls, and most importantly, fudge-covered almonds. Not all trail mix is confined to the trails.

I personally love the beach, but for some, it's hot, too salty, and too sandy. If you'd rather watch Mary Kate and Ashley's Holiday In The Sun and pretend like you're riding some waves, give Coconut Seven Layer Bar Non-Dairy Frozen Dessert a shot. With a coconut ice cream base, you'll feel like you're having fun in the sand, along with a whole lot of fudge chunks, walnuts, swirls of graham cracker, and, of course, caramel. Yeah, it really is a beachy dream... plus it's dairy free for all my fellow lactose intolerants out there (holla!).

The OG S'mores flavor is just as good as Gimme S'more!, but it focuses more on the chocolate rather than the marshmallow. Give them both a shot if you want the taste of two different types of campfires — there's definitely no going wrong with a rich combination of chocolate ice cream, fudge chunks, toasted marshmallow, and graham cracker swirls.

Everyone knows that Ben & Jerry's ice cream rules, but some of their flavors are straight-up perfect for a taste of summertime. Whether you're down for something fruity, chocolatey, or coconutty, there are so many delicious options, and it'll definitely give you that nice taste of summer heat from the comfort of your home.