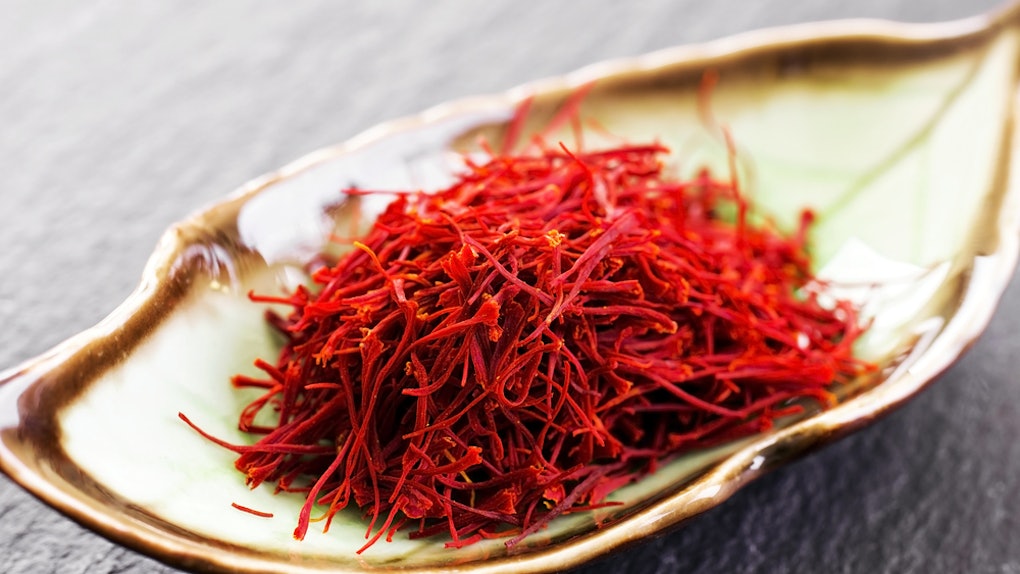 I'm not someone who loves to cook. The process of preparing food gives me no joy. However, watching people enjoy something I prepared makes all the sweaty (and swear-y) work worthwhile. For me, the pleasure of cooking is all in the reaction, which is why aphrodisiacs are so interesting. After all, the only thing better than getting rave reviews via yummy noises is getting rave reviews via the bedroom. But what if you don't have advanced cooking skills but would like to add a little ~sexy~ to your menu? There are several aphrodisiac spices to cook with that not only add flavor to your dishes, but to your sex life as well.

But what exactly qualifies as an aphrodisiac? And more importantly, do they actually work? According to WebMD, aphrodisiacs are foods that "can suggest sex to the mind, which in turn can help stimulate desire in the body." As How Stuff Works explains, they work in a couple different ways. "There are those that create sexual desire by working on the mind, and there are those that create desire by affecting parts of the body. For example, something that increases blood flow in the sex organs might simulate the feelings of sexual intercourse and have the effect of creating desire. Likewise, there are things that can make our bodies produce more of the chemicals associated with sexual desire." Amazing, right? While there is almost a seemingly endless list of foods and spices that have aphrodisiac qualities, here are five that are actually backed by science and that will literally add some spice to your sex life. If you’re an aphrodisiac skeptic, prepare to become a believer.

As if you really needed another reason to love chocolate, it turns out it really is an aphrodisiac as well. Chocolate contains both phenylethylamine and serotonin, which are “feel good” chemicals that affect the pleasure centers of the brain. Plus, even just the smell of chocolate has been shown to make the brain produce a spike of dopamine, another naturally occurring chemical in the body associated with feelings of pleasure and euphoria.

Saffron is as luxurious as it an effective aphrodisiac. It’s made from the threads of the saffron crocus flower. The flowers only bloom for one week a year and produce only three threads per flower. In a study conducted by Tehran University of Medical Sciences, researchers found that “a group of men given 30 mg of saffron per day for four weeks experienced greater improvements in erectile function than men given a placebo.” A second study focused on women found that those given saffron reported higher levels of arousal and lubrication.

In addition to being a very tasty spice to add to your morning cup of coffee, nutmeg has long been rumoured to be an aphrodisiac. As it turns out, there may be some truth to that. In a study published by BioMed Central, mice were given nutmeg to see how it would affect libido — and it worked. “Nutmeg possesses aphrodisiac activity, increasing both libido and potency, which might be attributed to its nervous stimulating property,” the study found.

Do you like spicy food? Turns out that chili peppers can actually get you hot in more ways than one. Meryl S. Rosofsky, a doctor and adjunct professor in the department of nutrition, food studies and public health at New York University, explained the aphrodisiac qualities of chili peppers to the New York Times. “[They] quicken the pulse and induce sweating, mimicking the state of sexual arousal, as well as stimulating the release of endorphins, which play a role in sexual pleasure,” she revealed.

If you are unfamiliar with maca root, it’s kind of an amazing vegetable. It’s related the to radish and it grows in the high plateaus of the Andes Mountains in Peru. Plus, it smells like butterscotch! While the people of Peru have long considered it an aphrodisiac, a study conducted by Pusan National University found that it has “a significant positive effect” on sexual desire in both men and women, as well as improving erectile dysfunction. Hot.

While there is plenty of science here to make you an aphrodisiac believer, you won’t really know until you conduct a few, ahem, experiments of your own — so get cookin’!