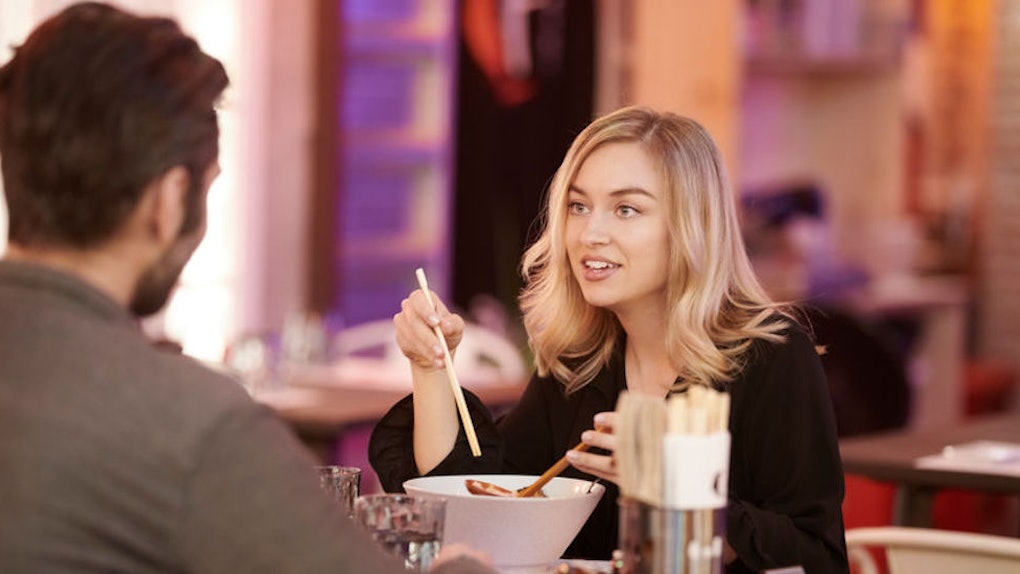 Before every date I ever went on, I would give myself a pep talk. I would tell myself, “Chill out and just enjoy the night. Don’t try too hard. Don’t worry so much. Just relax and let what happens happen.” Yeah, that never worked. By the time the date began, I was a bundle of nerves — sure utter humiliation was nigh. And, TBH, it usually was, because when you are this freaked out you’re pretty much guaranteed to act like a weirdo. But I'm a Virgo, one of the zodiac signs that get nervous before a first date, so I really never had a chance.

While understanding that my zodiac sign has a tendency to be anxious on first dates didn't make the nerves magically go away, there is something cathartic about knowing that it's a "Virgo thing," rather than just a "me thing" to have a full-on panic attack before sharing a meal with another human person. Baby, I was born that way. And Virgos aren't the only ones in this first date anxiety boat. Folks who have to step into the bathroom to take deep breaths periodically throughout the date, whose minds race throughout the night, and who aren't mad at a pregame cocktail or two... or three, are all on the same boat. So, if all of that sounds familiar, well, guess what? You're probably one of these signs.

Cancers and first date jitters go together like a crab and its shell. Though this sensitive water sign is incredibly loving and kind when they are comfortable, that same sensitivity brings out their suspicious side when they feel vulnerable, making them take any slight, real or perceived, very personally. They are also naturally shy and fear standing out in a bad way, and when they feel that way they just want to retreat into their shell, which makes the need to be “on” trigger their anxiety. Hang in there little crab.

As I mentioned before, Virgos may actually be the worst on first dates, because they are their own worst enemy. They are known for being perfectionists, and when it comes to themselves, they are incredibly self-critical and never give themselves a break. They are fussy worriers who are embarrassed easily. When on a date, they are terrified they will say the wrong thing, and will replay every second of the date in their head over and over for days, finding new ways to be embarrassed. I call it the "shame spiral," and I know it all too well. You've got to give yourself a break and remember that no one else thinks as critically about yourself as you do. Be kind as kind to yourself as you would anyone else.

Capricorns are incredibly ambitious and overachieving, which is also very attractive. But rather than believe how appealing they are, they just pile on the pressure until they are are a nervous wreck. Despite their ability to excel, they are the most pessimistic and fatalistic of the zodiac (that's actually where they get a lot of their drive from, surprisingly) and this can make them very self-conscious and vulnerable on a date. This sign just prefers to put their head down and get through things, and while that works in other areas of their lives, it's not the best tactic for dating. Give yourself a break, Cap. Look at your track record and see yourself they way the rest of the world does. You’re a winner, baby!

You might think that the most traditionally romantic of the zodiac would be a first date assassin, but, in reality, all that build-up and expectation can actually backfire for this romantic little guppy. That's because they are torn between two aspects of their personality: their tendency to trust too much and go all in in the name of love, and their inability to really trust themselves fully. They want to, but they just can’t stop worrying long enough to get out of their heads and just be in the moment. So, while the heart is most definitely willing, the head keeps getting in their way. Take a deep breath and go with the flow, and no one will be able to resist your kind and sensitive soul.

I realize that letting go of the first date anxiety is easier said than done, but ultimately it all just comes down to being kinder to yourself. We are all so hard on ourselves, and we deserve better.