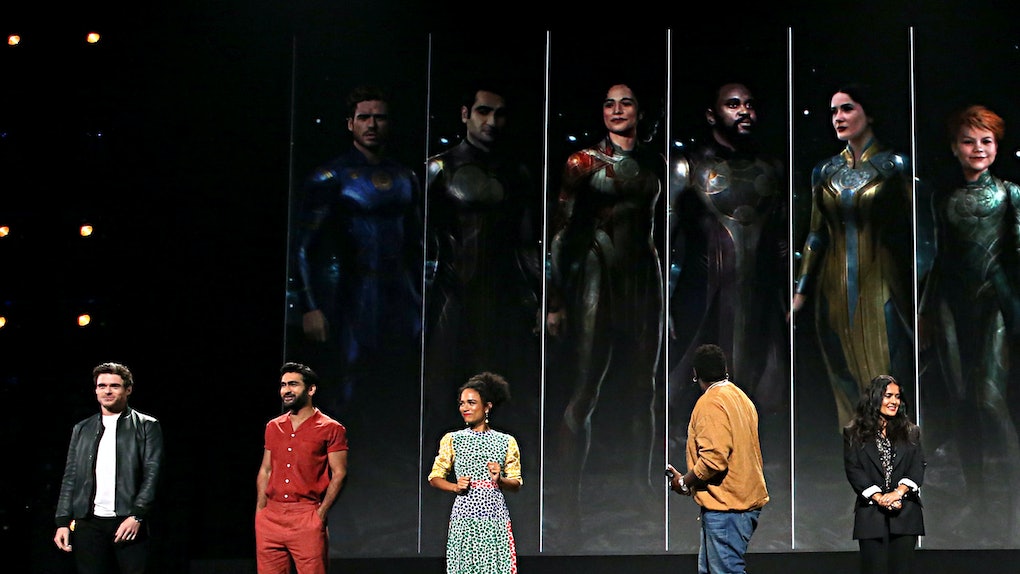 4 Theories About Marvel's 'Eternals' That Will Pump You Up

After dominating the box office with three releases a year since 2017, the Marvel Cinematic Universe is taking a step back for 2020. The coming year will only have two big-screen releases: Black Widow and The Eternals. The former will be filled with recognizable characters from an era in Marvel history viewers already know. But The Eternals are nothing but wild speculation so far. These theories about Marvel's The Eternals have only been juiced recently by Marvel head Kevin Feige, who dropped a few details recently.

Speaking at the Marvel panel at CCXP, Feige spilled a few nuggets about what fans can expect from the movie. For one thing, leaked set photos show several different eras, which Feige says is true. According to Collider, Feige said the film would take place over 7,000 years of Earth history, following the adventures of the 10 main Eternals characters:

Feige also confirmed the film would stick to the comic's origin story for the characters. They were created by the Celestials, who were hoping to breed them for food. Not only does that mean fans will see Celestials in the new film, but also the Deviants, an offshoot of these experiments of Eternals that came out wrong.

1. The Eternals Will Show The Creation Of The Marvel-verse

The Eternals existed for millions of years, created back when the Celestials visited Earth, and started conducting experiments on the proto-humans. So 7,000 years is merely a small portion of the lives of these characters.

Eternals have been around this whole time. Feige says they know of the Avengers. They've seen humanity become what it is today. They've seen life around the galaxy grow into the interstellar community. And for the X-Men fans, they've seen the rise of Mutants too. This movie could cover all of it.

2. The Eternals Will Tie Back To Known Characters

There aren't a lot of Celestials left from the creation of the Eternals. But that doesn't mean these being are gone. Fans have seen a couple of Celestials in Phases 2 and 3. Knowhere, for instance, from Guardians of the Galaxy, is located inside the head of a Celestial.

And Ego, Star Lord's father, is a living, breathing Celestial. Or at least, he was until recently. Could a young Kurt Russell turn up in the new film? Could this tie back to Guardians 3? Fans are hopeful.

3. The Asgardians May Be Involved

Eternals are humans remade into gods. Doesn't that sound like the folks at Asgard? It might explain the abilities some of Thor's people are born with.

This has given rise to the theory Thor will try to reach out to the Eternals as long-lost cousins, now his tribe is all but gone, perhaps as part of Thor: Love & Thunder. Could there be the seeds of the Asgardians rising again?

But the biggest theory is both Black Widow and The Eternals are Marvel's "rebuilding year." Both films reach back into the past. In The Eternal's case, the far past. These two films may be laying the groundwork for Phase 4 going forward, and Marvel in general for the next decade of movies.