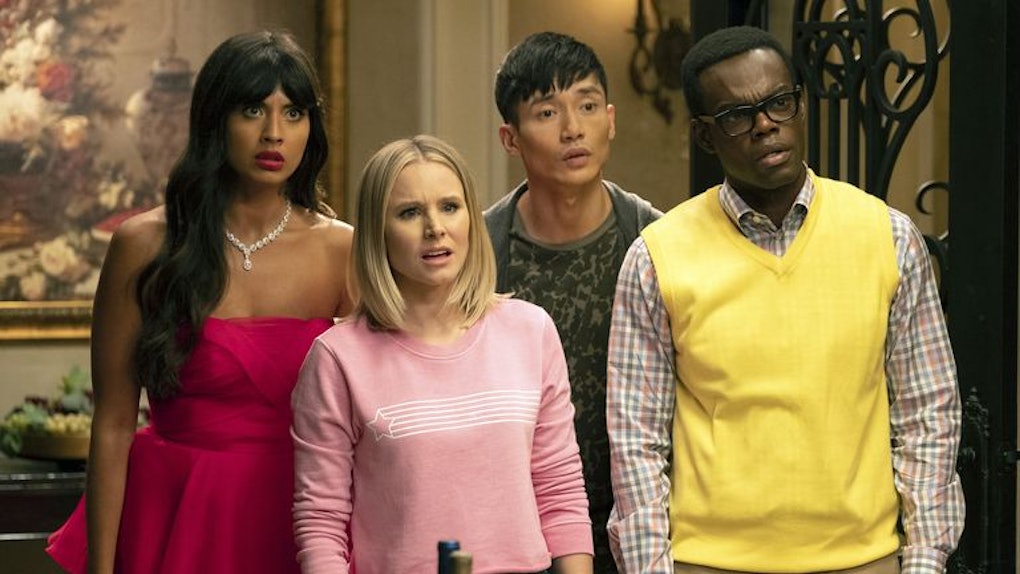 In only four years, The Good Place gained enormous popularity, pulled off one of the biggest plot twists in television history, and prompted some fascinating fan theories all over the internet. So, of course, viewers were distraught when they learned the show would end after its fourth season. Although there's nothing that can be done about the series' looming end, you can at least read these The Good Place theories about the final season to make yourself feel better. Warning: This post contains spoilers for The Good Place Season 4.

Before diving in, let's quickly recap everything that's happened as of Episode 4, Season 4. The OG crew, Eleanor, Chidi, Tahani, Jason, Michael, and Good Janet designed a new neighborhood — also a simulation Good Place — and took on four Bad Place subjects in the hopes of changing their personalities and saving all of humanity. NBD. In doing so, Chidi's memory got wiped, Eleanor became the leader of the project – with Michael as her CFO, Janet, under the stress of running the neighborhood, broke up with Jason, and Tahani is, well, Tahani, but with a little more insight. So, without further adieu, let's dive into these brilliant theories.

1. The Test Inside The Test

So, fans of the show know Season 4 will focus on the judge's test for the leading crew, finding out people can really become better after their lives on Earth. But one fan suggested the real test isn't the one these four humans are conducting. This theory claims Chidi, Eleanor, Tahani, and Jason are actually being tested themselves to, once and for all, see if they've changed for the better. Can they use the knowledge they've acquired to forgo their past "sins" and help others, despite the sacrifices the process could require? Not too far-fetched.

This theory, albeit short but very sweet, believes that at the end of the series, the crew will decline their Good Place invitations (which assumes they pass the test and save humanity, yay!). And instead, they will create the Improvement Place, where "bad" people will first be sent to see if they can be made better – a sort of a second chance.

3. (Almost) Everyone Is A Demon

If you've watched Episode 4, you'll know that in a big twist, the popular theory that claimed Janet really being the bad place Bad Place Janet actually came true. But this person takes it even further and suggests that it's not just Janet, but everyone except for Eleanor is a demon. Don't panic, though, the theory doesn't say the beloved characters never existed, but that at this point in the season, all have quietly been replaced by their Bad Place body doubles. Listing all the ways the characters are "off" from heir usual selves as arguments, the author of this idea uses small and easy-to-miss details – like Jason eating meatball subs when he was always a wing guy, or Michael saying some hurtful things to Eleanor that he otherwise wouldn't have.

This theory about Chidi's omnipotent origin was definitely one I didn't see coming. But according to this concept , Chidi's a god who simply took time from being god. This viewer believes The Good Place committee is analogous to Chidi's personality in their indecisiveness and inactivity and mentions another post, which deciphers the character's name. In Igbo, Chidi means "God is" or "God exists," while his last name could be translated to "is leaving." As in leaving to take on a human form, perhaps? Plus, you can't forget his love of moral philosophy. Eleanor did tell Chidi that sacrificing himself to make others feel better is probably the most "Chidi" thing she could think of in Episode 4. Remind you of someone?

More like this
These 'The Nevers' Theories About That Flying Ship Are Absolutely Bonkers
By Ani Bundel
What Happened To The Rose Family After 'Schitt’s Creek'? 6 Theories
By Rachel Varina
'The Witcher' Season 2: Release Date, Cast, Trailer, & More Info
By Ani Bundel
Stay up to date