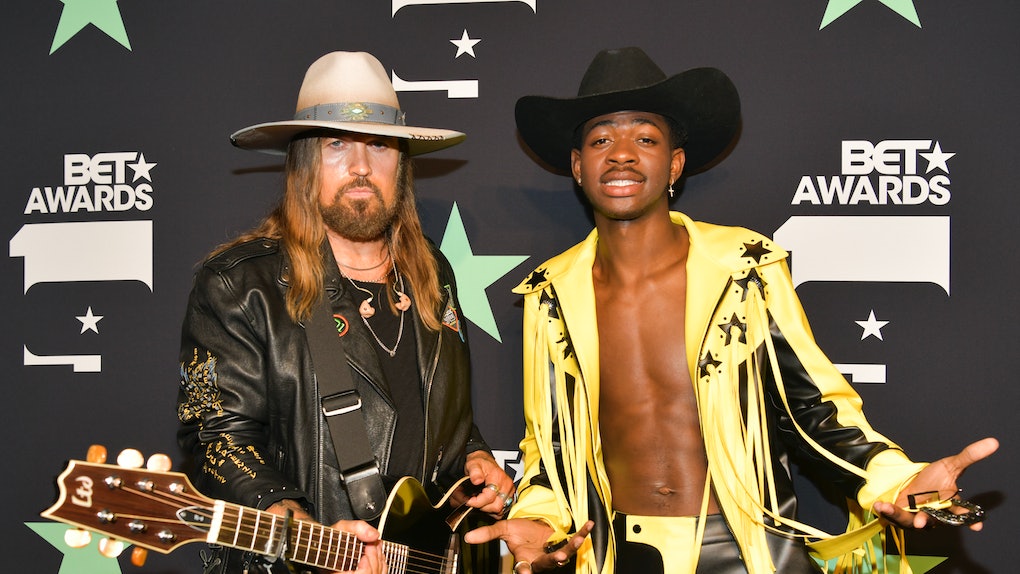 Lil Nas X and Billy Ray Cyrus really did something when they released "Old Town Road" earlier this year. The catchy tune quickly became one of the biggest songs of 2019, and even shattered a record that was set by Mariah Carey and Boyz II Men over 20 years ago. The tune remained on the Billboard Hot 100 chart for 17 weeks straight, dethroning Carey and Boyz II Men's "One Sweet Day." Cyrus and Lil Nas X not only mastered a music video to go along with it, but have performed multiple times together in recent months, giving us four "Old Town Road"- inspired costumes to recreate this Halloween.

While the song was a big deal for Lil Nas X, who rose to fame from it, it was also just as major for Cyrus. "Old Town Road" landed Cyrus his second No. 1 song, with his first being his '90s hit, "Achy Breaky Heart."

The two have definitely created a bond, too. From red carpet appearances to award show performances, both Cyrus and Lil Nas X have sported a variety of head-turning outfits that are perfect for Halloween.

Whether you're going solo, with a pal, or are gathering a group for this year's festivities, Lil Nas X and Cyrus have you covered.

There's no shortage of costumes to work with from the official "Old Town Road" music video. In the intro, the two were dressed in their cowboy best. Let's start with the props.

If you're going as Lil Nas X, you'll want to grab a money bag.

If you're going as Cyrus, you'll want to carry a circular water canteen. Thanks to Amazon, you can find a reasonably priced one that also wraps around your waist.

And the clothing is just as simple. Start with a dark pair of boots.

Next up, pair it with a brown jacket.

Grab some brown or khaki-colored pants. I'd recommend jogger pants, so you can tuck them into the boots easily.

If you've seen the "Old Town Road" music video, you surely remember the group of women dancing around in their cow-print vests. This is an easy and fun group costume, with layers you can wear over and over again. Let's start with the focal point: the animal print.

Next up, grab a long sleeve black shirt.

Grab a pair of black sneakers.

And complete the look with a black cowboy hat!

Let's move on to the 2019 MTV VMAs, when Cyrus and Lil Nas X accepted the award for Song of the Year for their work on "Old Town Road." Cyrus kept his attire cowboy cool, while the rapper went for a more eccentric outfit. Let's get the looks, starting with Cyrus.

Begin with a black T-shirt.

Add a black coat on top.

Top it off with a khaki-colored cowboy hat.

For a more eccentric look, you can take on Lil Nas X's outfit, starting with a red turtleneck.

Next up, add a matching jacket and pants.

Get some yellow, iron-on decals to add to the jacket and pants.

Complete the look with a red hat.

I can't forget the look Cyrus and Lil Nas X sported for their performance at the 2019 BET awards.

If you're going as Cyrus, start with a leather jacket.

Add a guitar and microphone, and there you have it!

For Lil Nas X's look, start with a canary yellow suit. Be sure to keep the top open and add fringe for the full effect.

Add stick-on leather strips throughout the outfit, add a black cowboy hat, and you're good to go!

And just like that, you have four costumes inspired by one of 2019's biggest songs.