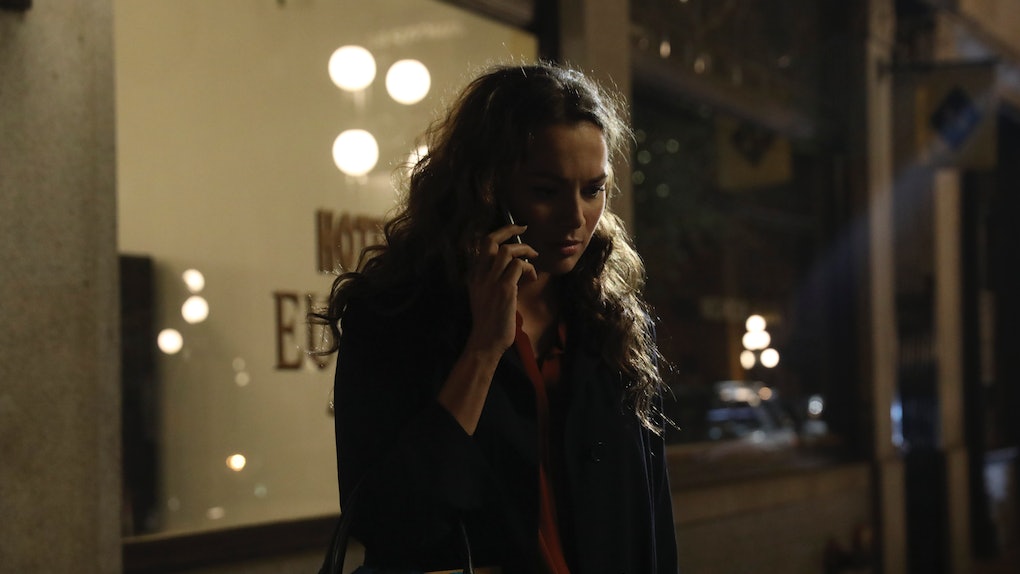 After attempting to prevent the Dixons from learning about Jon's darker business, Ashley (Christina Ochoa) failed in Dec. 12's "Christmas Wishlist," watching from her car as Delilah (Stéphanie Szostak) was ordered to vacate her house sometime in the next 21 days. In the episode's closing moments, she arrived at the same apartment building we've seen her at before, which may or may not be where she lives. With a handful of overdue bills in tow, Ashley thought about the first time Jon (Ron Livingston) brought her there and said, "I'm not the man everyone thinks I am." Before Ashley closed the apartment door during that visit, she kissed him, but we don't know whether this was the first time she initiated a romantic gesture with him.

The next episode's promo promises that answers about Barbara Morgan and the term Rutledge will come soon, and Ashley will inevitably be involved in these reveals. We can also hopefully expect to see more about Jon and Ashley's relationship. If the show's writers ever hit a roadblock, they can certainly take a note from some of fans' wildest theories about the two characters, which are seen below. What's your prediction about Jon and Ashley?

OK, that kissing flashback seemed to nip this guess in the bud, but it was holding up well beforehand. Reddit user meanwithag once suggested that Ashley could be Jon's daughter from a long-ago fling and that Barbara Morgan could be her mother. Grief causes people to do weird things, but this would definitely explain why Ashley is so invested in finding out who Barbara is. If proven, Jon and Ashley as father and daughter would've been an interesting dynamic to see, but "Christmas Wishlist" seemed to ensure that their relationship was just typical fulfillment of a secretary falling for her boss.

2. Ashley Is Pregnant With Jon's Baby

Secret babies and accidental pregnancies are aplenty on A Million Little Things so far, and given the show's tendency to overload itself with characters' problems, throwing in another baby wouldn't be too surprising. Reddit user TetrollogieAuFallots theorized:

Ashley is pregnant with Jon's baby, she thought Jon didn't know but he did... she [sleeps with Gary] while he's vulnerable so she can say that the baby is his. She never gave the letter to Delilah because she was concerned about how she would provide for her unborn daughter.

Including a stealthier motive to Gary and Ashley's sudden hookup is a little far-fetched, but A Million Little Things clearly isn't afraid of clichés and slightly resembling a soap opera. So far, Ashley hasn't shown any signs of pregnancy, but she did seem to have an emotionally charged reaction to Delilah's pregnancy. Should we go on bump watch now?

3. Jon Led Another Life With Barbara Morgan & Told Ashley About It

Does Ashley live in that apartment where she picks up bills or not? We're still not sure, but "Christmas Wishlist" told us that Jon first introduced her to the building presumingly before revealing a secret. On Reddit, the fan ario62 wondered if Ashley's overdue bills are actually Jon's personal finances, saying:

He seemed to have a secret apartment (where he also got mail sent), so I wouldn’t be surprised if he had a secret life. When they were outside the apartment and he said “I’m not the man everyone thinks I am”, he looked strung out to me.

Other theories also suggest that Barbara Morgan is actually the one romantically tied to Jon, which would explain her name alongside his friends' on an insurance policy. Perhaps Ashley briefly met Barbara at the apartment without learning her name. We'll need to wait for more episodes to further validate this guess, but was Jon really as awful as the theories are implying?

4. Jon Rebuked Ashley's Advances, But She Still Feels Loyal To Him

Dramas love their fake outs, and despite growing distant from Delilah before his death, Jon always came across as very loving toward his family. Although the mid-season finale ended with Jon and Ashley kissing, what are the chances of the next episode picking up after that door closed? Jon didn't seem entirely focused during the scene, and in response to his moodiness, fan dont_ask_my_cab wrote on Reddit:

...someone on Twitter suggested [the kiss] could also be a red herring — that she was into him and misread what was happening. I kinda buy that because we've mostly seen Ashley's relationship with/to Jon; we wouldn't be surprised with an affair because it's pretty obvious she was in love with him. Jon could still be sketchy AF but also not interested in Ashley like that, and just wanted to tell her his sketchy s***.

We all know Ashley loved Jon, but did Jon actually stop her before she acted on her feelings? If A Million Little Things wants to win its way back into skeptics' hearts, taking this path would definitely be the way to go.

Here's to the second half of this season hopefully clearing some confusion about Jon and Ashley. Season 1 of A Million Little Things continues on Thursday, Jan. 17, at 9 p.m. ET on ABC.