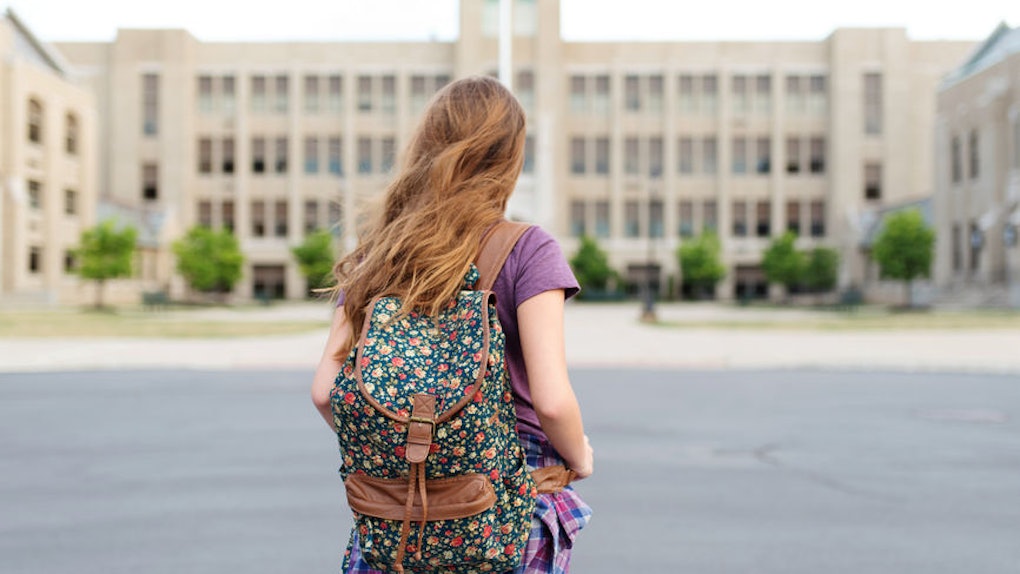 3 Tips For Avoiding Sexual Assault On Campus, Especially During The Most Dangerous Time Of Year

While sexual assault is in no way the fault of the victim ever, there are some safety tips for avoiding sexual assault on campus that you can arm yourself with. It's an unfortunate fact that you are most at risk for sexual assault during your first semester of college, according to a 2008 study published in the Journal of American College Health. Amid the excitement of college orientation events, getting to know your roommates, and starting your classes, the first six weeks of the semester are when more than half of campus sexual assaults occur, according to statistics from the Rape, Abuse & Incest National Network (RAINN).

It's important to note that sexual assault can happen at any time, anywhere, and not just on college campuses. However, more than 50 percent of college sexual assaults occur between August and November, according to RAINN. Additionally, students are at an increased risk during the first few months of their first and second semesters of college, also according to RAINN.

"While we don't know for sure why assaults occur more often early in the semester, as students acclimate to campus, they do tend to spend more time socializing," RAINN Press Secretary Sara McGovern tells Elite Daily.

There are a number of ways you can work to help cultivate a safe campus environment at your college. And if something happens and you or someone you know should ever need them, there are many resources available for survivors of sexual assault.

1. Be aware of your surroundings.

There is of course no foolproof way to prevent sexual assault, but especially during the high-risk time that is your first semester, you should focus on being aware of your surroundings to stay safe. McGovern suggests simple steps that can make a difference, like never leaving your drink unattended. "It's important to remember that sexual assault is always the fault of the perpetrator, and never the victim, but there are some safety tips that you can keep in mind," she says.

RAINN suggests making your own drinks in social settings, knowing your limits when it comes to alcohol, and keeping track of how many drinks you're consuming. Be careful about publicly posting your location on social media platforms like Facebook, Snapchat, Instagram, and Twitter.

When you're walking alone in public, especially late at night, don't use headphones — or only use them in one ear — so that you can remain aware of your surroundings. If you can, try to always walk home with someone you trust. Many campuses provide security escorts or safe rides home. Ask your RA, your resident director, or visit campus safety to find out what resources your campus has available.

Think about back-up plans in case of an emergency. Do you know the address of your dorm or college? If your phone dies, do you have a number memorized that you can contact to get help? Carry emergency cash in case you can't use a card.

2. Have your friends' backs.

When you go out to a party, RAINN advises that you go with friends you know you can trust. Make a plan to leave together, and touch base throughout the night. If your plans change, let them know. When you're ready to leave, make sure no one is left behind or stuck in an unfamiliar or unsafe situation. Don't just stand by if you feel uncomfortable or see something that makes you nervous, RAINN's website says. If you notice someone who looks like they need help, follow your instincts and listen to your gut. It's always better to be overly safe than to say nothing at all.

"Bystander intervention is a great way to cultivate safety on campus," says McGovern. This means stepping in to prevent a potentially dangerous situation if you see someone who may need help. She continues, "When you see something that doesn't seem right, there are simple ways to step in and help a friend."

If you think someone needs help making an exit, try to interrupt the situation. "A distraction can give the person at risk a chance to get to a safe place," according to the RAINN website. Cut off the conversation by asking them if they want to grab a slice with you, or make another excuse to get them out of there. Try saying, "Let's get pizza, I'm starving." Or, "I'm not feeling this party. Let's try somewhere else."

If you're on campus, get your RA or call campus security. If you're out, talk to a security guard, bartender, or employee about your concerns. "Sometimes the safest way to intervene is to refer to a neutral party with the authority to change the situation," according to RAINN. If you're genuinely concerned for someone else's safety, don't hesitate to call 911.

Sexual assault prevention education on campus is key, and it's important for each campus to provide the best program for their school. RAINN created the Prevention Navigator to help colleges find the right program and give students and administrators a place to share their experiences, according to McGovern. NASPA's Culture of Respect Prevention Programming Matrix is another option for implementing sexual violence prevention and response on college campuses.

Learn about the resources available on your campus, and if you have recently participated in your campus's prevention program, post a review and make your opinion count.

No one wants to think about the possibility of being assaulted, but the more you know about the resources available to you, the better — just in case.

"It's hard to know how to react after sexual assault, but it's important for survivors to remember that what happened is not their fault. Students can access resources on their campuses and help is available 24/7 by calling the National Sexual Assault Hotline at 800-656-HOPE or going to online.rainn.org," says McGovern.

College is an exciting time. Do take the necessary steps toward feeling safe on your campus, but don't forget to enjoy the next four years.