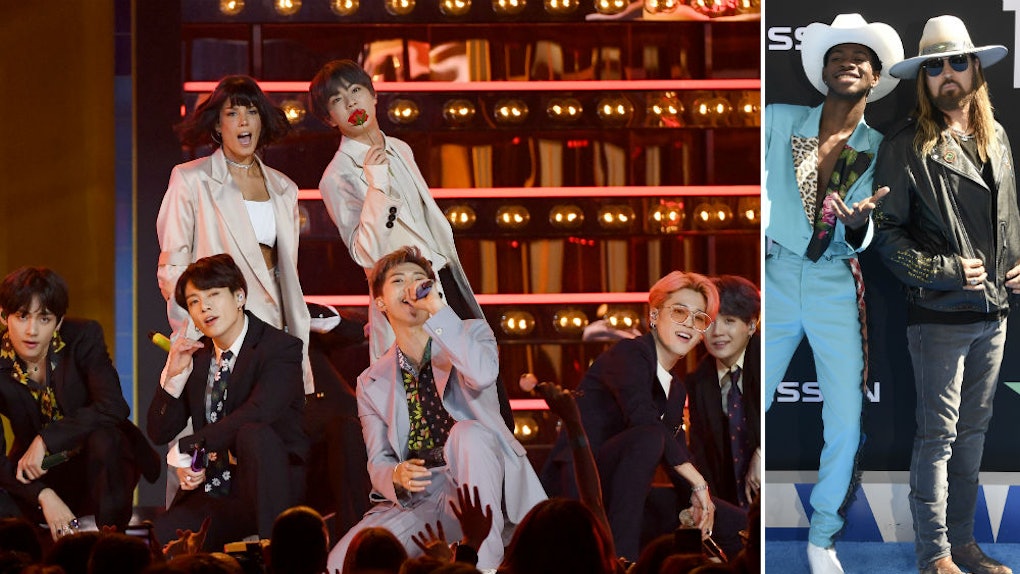 23 Random Musical Collaborations So Epic, They Changed The Game

Is two really better than one? The classic saying often rings true when it comes to music, and some of the most iconic tracks to date have been collaborations. Britney and Madonna? Undeniably epic. Rihanna and Eminem? Iconic doesn't even cover it. And we can't forget about the time Nelly and Tim Mcgraw hit the studio together. That was definitely one of the more random musical collaborations, but now? It's considered a classic!

Perhaps what really makes a musical collaboration so great is the element of surprise. Sometimes a tune that has no business working out ends up being pure musical magic. I mean, a joint track between Katy Perry and Snoop Dog didn't sound like the best idea but "California Gurls" turned out to be the bop of all bops. More recently, genre-clashing collabs between K-Pop stars and top 40 artists have been hitting the scene. Like, Something just feels so right about Halsey's vocals blended with the guys from BTS.

While a solid solo smash is never a bad idea, there's nothing quite like seeing two of your favorite superstars team up to lay down a track. So, join us in recounting some of the most epic (and random) musical collaborations of all time. You can thank us later.

Does this one even need an explanation? '90s babies will remember singing their hearts out to this one at the turn of the century and every time it plays, it feels like 2004 all over again.

Global K-pop sensations BTS dropped the cross-genre collab of all cross-genre collabs when they linked up with Halsey in April 2019. The band threw a colorful dance party with the pop singer in the corresponding music video and it was E-V-E-R-Y-T-H-I-N-G. I dare you to watch without breaking out into a dance.

Is it rap or is it country? The world may never know, but "Old Town Road" took the music world by storm this year in a big way. The genre-bending banger was an instant viral hit and with Billy Ray on the remix, well, it's kind of impossible not to love it.

Ah, the self-love queen strikes again. It seems like everything Lizzo touches turns to gold and that definitely rang true when she dropped her "Truth Hurts" remix with K-Pop stars AB6ix. The boy band proved to be perfect company on the chart-topping track and it will have you pressing the "repeat" button.

Just when I thought that it didn't get better than "Old Town Road," Lil Nas X absolutely blessed the world with this remix of his song. BTS and Lil Nas on the same track? SIGN. ME. UP.

I'm still not really sure how these two linked up, but I'm here for it. I mean, Thugger has an affinity for fierce fashion and who knows fierce fashion better than the Rocketman himself? Maybe this collab makes more sense than I initially thought.

Emo kids everywhere got the ultimate surprise when Panic! At The Disco frontman Brendon Urie landed himself on Taylor Swift's Lover album in 2019. Like it or not, this one's a bop, y'all.

Never forget when this collaboration dropped and Twitter lit up with questions like "Who Is Paul McCartney," and "Is Kanye putting this emerging artist on the map?"

Disheartening, yes, but this trio served up some serious musical magic with this iconic track and hey — at least ~*the kids*~ know who Paul McCartney is now.

Why yes, Paris Hilton did really dedicate an entire song to her BFF's derriere. "B.F.A." or "Best Friend's Ass" served as the ultimate ode to Kim Kardashian who was featured in the video clip as well. She may not have sung on the track, but Paris and Kim were unstoppable in this flashy visual.

Released just a year after Rihanna's headline making-relationship with Chris Brown turned sour, this video hit a little too close to home. But maybe that was the point. Regardless, fans loved it and the track spent a whopping seven weeks atop the Billboard charts. How's that for staying power?

11. "Meant To Be" by Bebe Rexha & Florida Georgia Line

Pop meets country and sassy meets twangy in this joint track that almost never happened. As the story goes, Rexha and the FGL guys linked up in the studio only after Charlie Puth canceled last minute, but let's be honest, Bebe was the woman for the job here! Fate is a four letter word, y'all.

This angsty collab between rap's #1 king and one of the biggest rock groups of all time was so iconic that no one even seemed to question how they landed themselves in the studio together. Can we get an encore?

I have one question after hearing this track: HOW did this not happen sooner?! Charlie XCX was tapped by BTS (Jimin, Jin, and Jungkook are featured on the track) for the lead track from the BTS World soundtrack for their mobile game and it couldn't have been a better fit. Charlie's sugary pop vocals were just what this melodic track needed.

IDK man, I'm still scratching my head over this one. The "Island In The Sun" guys with Lil Tunechi? Random AF. That being said, it's a grower. Weezer x Weezy were onto something with this one.

15. "Me Against The Music" by Britney Spears & Madonna

Pop music's princess laying down a track with queen Madonna was every bit as iconic as it sounded like it would be. The real shining moment of this duo was when they performed at the 2003 VMAs and shared their infamous kiss, but the "Me Against The Music" video was equally as captivating. Get it, ladies!

16. "Take What You Want" by Post Malone & Ozzy Osbourne

Post Malone took his "Rockstar" hit-making skills to the next level when he linked with Black Sabbath frontman Ozzy Osbourne in 2019 for "Take What You Want." The track even inspired a slew of hilarious tweets about how Post "put Ozzy on the map" but, fingers crossed those were pure Twitter satire.

Dreams do come true, people! Justin Bieber super fan Billie Eilish had her dreams come true when she met the Biebs at Coachella last year and just months later, enlisted the singer for a track. With Bieber on the remix to this already viral smash, this duo nearly broke the internet.

Posthumous tracks, while confusing, seem to be popping up more than ever. The pop rockers in Fall Out Boy released "I've Been Waiting" with the late Lil Peep following his death and it was the ultimate emo ode. RIP to a real one.

This track was definitely a weird flex but is now a karaoke cult classic. Seriously, have you ever been at karaoke for more than an hour and NOT heard this song?

This infectious bop was basically played on loop by every top 40 radio station in summer 2010 and it still oozes that summertime ~feel~ every time it comes on. Snoop's verse on the flirty track may have seemed a little out of left field but, hey, this Cali girl is here for it.

If you really think about it, between Aoki's energy-packed sets and Nye's endless enthusiasm about well, everything... these two kind of complement each other pretty flawlessly. While bizarre, yes, the song is basically a science nerd's dream come true.

Fonsi clearly knew how to take this fan-favorite track to the next level, in that vocals from the Biebs seem to elevate just about any song. With Fonsi's trademark Latin flavor being sprinkled with some pop spice from Bieber, it's no wonder "Despacito" instantly caught fire.

Name a better duo, I'll wait. The late, great Avicii made musical magic with Aloe Blacc on this one and whether you're an electronic music fan or not, this song was inescapable (in the best way!) I bet you'll know every last word.