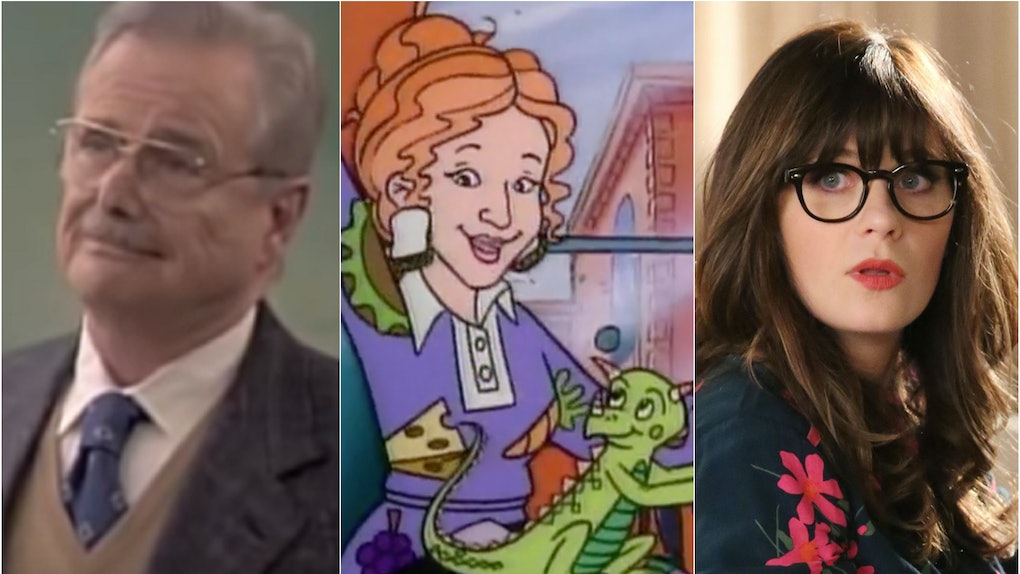 Even if you’re not returning to school this September, a chill in the air and school bus sightings inevitably inspire thoughts of your childhood classrooms and the teachers running them. Nowadays, those back-to-school feels mark the end of beach trips and rooftop happy hours, so they can be particularly depressing for some people. If you need a motivational boost for the change in season, it’s time to remind yourself of the TV teachers who truly ruled their schools.

Whether Mr. Feeny’s final lesson makes you tear up or you prefer crushing on Max Medina from afar, teachers on TV range from the ideal to the unbelievable. Just like in the real world, the schools of TV have hit-or-miss records when it comes to hiring teachers, but they’re packed with memorable mentors and plenty of their funny fails. Not every teacher has the ability to become that inspirational leader, but hopefully you’ve encountered at least one person who helps you relate to the TV characters who respect and admire their classroom leaders.

Found in cartoons, comedies, and dramas, TV teachers capture all the ups and down of the profession, and in many cases, never truly leave their students behind. Luckily, fans never have to leave the following teachers behind either.

Initially introduced as Cory Matthews’ elementary school teacher, George Feeny was also the Matthews family’s neighbor before following the kids to high school and even popping up as a professor at their college. IRL, people usually can’t adjust to new teaching levels as smoothly as Mr. Feeny did, but his lifelong mentorship of Cory, Shawn, Topanga, and Eric is legendary for a reason. Keep his parting words of “dream, try, do good” in mind whenever you hit a rocky path.

You knew you were in for an exciting science class when your teacher rolled in the TV stand for an episode of The Magic School Bus. Although any teacher who let the Frizz take over class for a day was cool, they definitely weren't as entertaining as Ms. Frizzle and her regular field trips into the beyond. From her zany outfits to her love of adventure, Ms. Frizzle reminds viewers that there's always another way to look at something.

Although his actions as a teacher were a little unethical, Mr. Schuester took the Mr. Feeny approach when it came to influencing his Glee Club students. Reigniting the defunct club and recruiting unlikely candidates for the singing group, Mr. Schue definitely changed the lives of the New Directions members. Selecting unique song themes and enthusiastically rapping one too many times, he was essentially the Glee Club's dorky dad who always knew how to respond in tougher times.

Sometimes a person's personality feels particularly indicative of their dream job, and Jess Day is no exception. Although she faced plenty of ups and downs in her teaching career, her love of impacting students always brought her back to a classroom. Given TV's recent tendency to lean on teachers' more cynical sides, Jess stood out for her optimistic take on the profession.

Perhaps the most well-known Key & Peele skit, "Substitute Teacher" planted inner-city school veteran Mr. Garvey in a classroom with white students who he believed were named quite bizarrely. The sketch's popularity led to a follow-up clip, and Bachelor in Paradise star Blake Horstmann even created his Instagram handle based on the original skit's use of his first name. Substitute teachers may not get much love, but Mr. Garvey is definitely a memorable replacement.

6. Annalise Keating ('How To Get Away With Murder')

In recent years, How to Get Away with Murder focuses less on the classroom and more on deadly secrets, but when the Shondaland drama began in 2014, the collegiate vibes were strong in Annalise's law school lecture hall. A fiery criminal defense attorney, Annalise took Middleton University students under her wing as she and this group embarked together on the investigation of intricate murders.

Bart Simpson's teacher received a proper sendoff in 2014 when voice actor Marcia Wallace died, but before that, she was often annoyed with her students and her lack of a love life. Chances are, most people had teachers similar to Ms. Krabappel rather than the idealistic educators of other shows, so watching her really does feel like going back to school.

Kindergarten teacher Lily wasn't the only one in a classroom on this sitcom. Ted eventually worked as an architecture professor, but he asked his students for feedback on his personal life a little too frequently. Thus, Lily's assertion at school and struggles in picking a baby name unaffiliated with a bad student are even more relatable when it comes to your friends who are currently teaching.

What is it about single moms and their kids' teachers on TV? While I've yet to see this trope play out in reality, I definitely understand Lorelai's attraction to Max, Rory's English teacher who pursued her despite how those at Chilton would perceive it. Lorelai and Max's whirlwind relationship ended with the former abruptly calling off their engagement, but English majors everywhere have a soft spot for the bookish and brainy Max.

Like all of the adults in the Peanuts cartoons, Miss Othmar's lines were always unintelligible, but she was special because Linus formed a crush on her. Viewers don't know much else about her, but if she captured the attention of the sweetly precocious Linus, she must have been an impressive teacher.

Following in Mr. Feeny's footsteps, Boy Meets World's Cory grew up to be a history teacher. Having to teach his daughter and her friends often led to lessons going awry on the spinoff series Girl Meets World, but Cory clearly learned from the best when it came to molding the minds of young people.

As the toughest teacher in elementary school, Mr. Ratburn had no qualms about assigning mountains of homework and encouraging students to step out of their comfort zones. In the PBS cartoon's later years, he became more of a mentor to Arthur and his friends, and he even made real-world headlines when he married another man in a May 2019 episode. Proving that teachers' lessons can go beyond the classroom, his wedding reinforced the lesson to young viewers that love is love.

The whole point of Recess was to celebrate time with your friends on the playground, but the gang's classes with fourth-grade teacher Miss Grotke didn't seem that bad. Her witty remarks might have flown over your head as a kid, but looking back, this feminist hippie was actually instilling a sense of social justice in her students on a regular basis.

Hey Arnold! series creator Craig Bartlett confirmed in 2017 that Mr. Simmons was gay, but what fans remember most about Arnold's fourth-grade teacher was his devotion to the importance of questioning. The kids didn't enjoy his non-traditional teaching style at first, but they soon learned how much kindness counts in the classroom.

She was technically a guidance counselor, but Tami and Coach Tayler were East Dillon's power couple, showing that the best people in a school aren't necessarily the teachers. There wasn't much Tami wouldn't do for her students, even risking her job to help a pregnant teen explore all of her options. A more formal classroom setting may prevent you from getting to know your teacher, and Tami is a reminder that the person to turn to in trouble might be in the guidance office.

As a paleontology professor, Ross inappropriately dated a student and felt flattered when a male student said he was in love with him to gain sympathy. He definitely wasn't the greatest teacher, but there's no doubt that his classroom antics must have been entertaining from a student's perspective.

Facing terminal cancer, chemistry teacher Walter White began making meth to save money for his family. His plan's noble beginnings eventually turned deadly, but before Walt transformed into a dangerous force, his classes seemed pretty interesting. Plus, anyone who resorts to making meth is definitely skilled in chemistry, so at least those students were in the hands of a competent teacher.

Also seen teaching in the classroom, Vice Principal Neil Hackett eventually became the Diffys' next-door neighbor, fueling his suspicion that something was off about the family secretly from the year 2121. He never totally caught on, but Phil and Keely often saw Mr. Hackett's relatable side, reminding you that even the oddest teachers have their own lives.

Before befriending Lizzie's dad, Mr. Dig impressed students with his casual teaching style and important life lessons. As a substitute teacher, he was also a nice relief from the humdrum typical school day. Unlike Lizzie, I wouldn't even mind having him over for dinner.

Señorita Rodriguez was possibly the busiest person at Bayside High, teaching Spanish and moderating several clubs. Longtime teachers may have to resort to clever means to stay invested, so she liked to raise students' hopes before smashing them. The character has yet to appear on Disney Channel spinoff Raven's Home, but here's hoping for another appearance soon.

Left without her class in one episode, Ms. Fowl coped by impersonating her students and admitting she missed them. Teachers don't often show this soft side, but Ms. Fowl's vulnerability reminds viewers that in this position, people can't help but love the students in their care.

You may not have a reason to stop by school anytime soon, but in the words of Mr. Feeny, dream, try, and do good by picking up an apple for a teacher in your life.

More like this
These Iconic 'Grey's Anatomy' Songs Belong On Your Moodiest Playlist
By Abby Monteil
20 Shows Like 'Shadow And Bone' To Watch When You Need A Fantasy Escape
By Abby Monteil
Paramount+'s 'iCarly' Revival: Release Date, Cast, Trailer, & More
By Cianna Garrison
Stay up to date