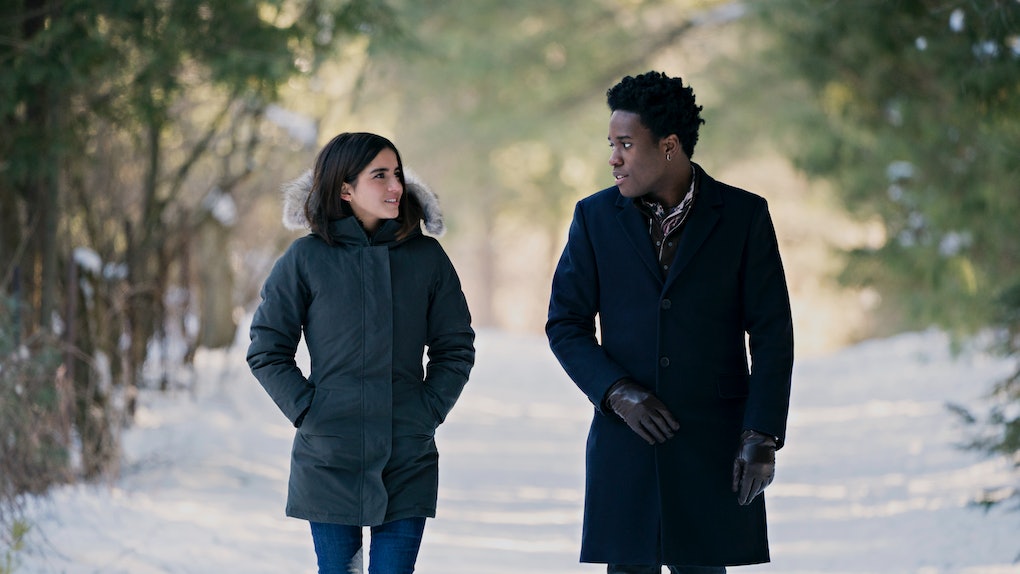 It's beginning to look a whole lot like Christmas. All the signs of the season are here, including the new holiday movies that are popping up everywhere. One of the standouts so far of the 2019 holiday season is, Let It Snow. The new film dropped on Nov. 8, and ever since then, fans have been fawning over all the cute moments from Netflix's Let It Snow.

Warning: Spoilers for Let It Snow follow. Let It Snow chronicles one snowy Christmas Eve, when the lives of a bunch of small town teens intersect in sweet, funny ways. It's kind of like a YA version of Love Actually, but with even more heart-warming moments. In fact, fans on Twitter can't stop sharing just how adorable and cozy they think Let It Snow is.

One reason that so many people are excited about Let It Snow is that it features so many different types of relationships. The movie truly has everything you could want in a heartfelt holiday movie. From positive LGBTQ representation to supportive family dynamics, Let It Snow showcases all kinds of love. It's exactly the kind of feel-good movie that's perfect for the holidays, and this list includes all the too-pure moments that will get you in the holiday spirit.

1. Julie Trying To Buy Her Mom An Elf

Right from the start, the movie begins with Julie (Isabela Merced) spending her Christmas Eve trying to find her mom the perfect elf figurine. Talk about a devoted daughter!

2. Tobin & Duke Saying Everything In Unison

Even though Duke (Kiernan Shipka) doesn't realize it at the beginning, she and Tobin (Mitchell Hope) are perfect for each other. That's never more obvious than when they say everything in unison, including their plans to get some queso deluxe.

3. Julie Throwing Herself At Stuart... Accidentally

It may have been all the train's fault, but when Julie falls onto Stuart (Shameik Moore) during a bumpy ride, it's clear there's a romantic spark between them.

4. Stuart Asking Julie To Have A Waffle With Him

Julie assumes pop star Stuart has some celebrity business to attend to. Instead, he asks her out in the cutest way by inviting her to have a waffle with him.

5. Dorrie Talking About The Night She Spent With Kerry

When Dorrie (Liv Hewson) describes just how big a crush she has on Kerry (Anna Akana), you can practically see the hearts in her eyes.

When Tobin begins his hangout with Duke and JP (Matthew Noszka) he definitely doesn't expect the adorable bear hug he gets from JP.

7. Stuart Telling Julie She Could Do A Lot Worse Than Her Town

Stuart has a real soft spot for Laurel, Illinois, and it shows when he talks to Julie.

Even though Kerry is hiding their relationship from her friends, she shows Dorrie just how much she means to her with a romantic, secret make-out sesh.

What's a holiday movie without an adorable sledding scene? Julie and Stuart snuggle up for some truly festive fun.

It's even more clear that Duke and Tobin have an intense connection when they have the sweetest sing-a-long to The Waterboys' "The Whole of The Moon."

11. The Multicultural Pageant At Julie's Church

Just another thing to love about Laurel, Illinois, is that the town knows how to honor all cultures during the holidays, including the fictional ones from Game of Thrones.

The Tin Foil Lady (Joan Cusack) is a bit of an enigma, but one thing audiences know for sure about her is that she's there for the teens of the town when they need her.

14. Julie's Mom Telling Her Daughter To Live Her Life

Julie is ready to make a huge sacrifice for her mom by not going to Columbia for college and instead staying home to take care of her. However, when her mom learns of those plans, she insists Julie leaves and lives her life to the fullest.

After BFFs Addie (Odeya Rush) and Dorrie have a blowout fight, Addie makes it up to Dorrie by giving her the best gift ever: the same Christmas pig Dorrie had been planning on giving her.

16. Tobin Telling Angie He Loves Her Her

Arguably the best part of any holiday rom-com is the big proclamation of love, and Let It Snow certainly delivers in a big way. Tobin professes his love to Duke on the roof of the "Affle House," and it's so cute it's tear-inducing.

17. Angie Telling Tobin It's Always Been Him

Scratch that — the actual best part of a holiday rom-com is when the other person reciprocates the proclamation of love. Duke tells Tobin she's always had feelings for him, and then they share the most epic rooftop kiss.

At the beginning of Let It Snow, Julie makes it clear she hates her town and the "Affle House" (pronounced "awful house"), where everyone hangs out. But, by the end of the movie, Julie's found a newfound love for her town. She shows that love by fixing the restaurant's sign with Christmas lights so it reads "Waffle House" like it's supposed to.

19. Kerry Telling Dorrie She Makes Her Want To Be Brave

By the end of Let It Snow, it looks like Dorrie might end up with her heart broken. However, that all changes with Kerry admits to her that she hasn't come out yet — but Dorrie makes her want to be brave. Then, Dorrie and Kerry finally share their first public kiss as their friends cheer them on.

Addie breaks up with boyfriend because she's determined to find someone who appreciates her. The audience gets a hint that the person who appreciates her might be the sweetheart college guy JP, since he returns her lost pig to her and they share a flirtatious look.

21. Stuart & Julie Kissing At The Party

And finally, the movie ends with one last duo coupling up. After he left Laurel, Illinois, Stuart returns just so he can share one deeply romantic kiss with Julie... and begin their new relationship.

You can watch Let It Snow on Netflix now.

More like this
10 Quotes From Netflix's 'Enola Holmes' That Are So Freaking Relevant
By Rachel Varina
These Unique Gifts For Moms Are A Change Of Pace From A Bouquet Of Flowers
By Cianna Garrison
What's Leaving Netflix In May 2021? Say Goodbye To Some Faves
By Ani Bundel
Stay up to date