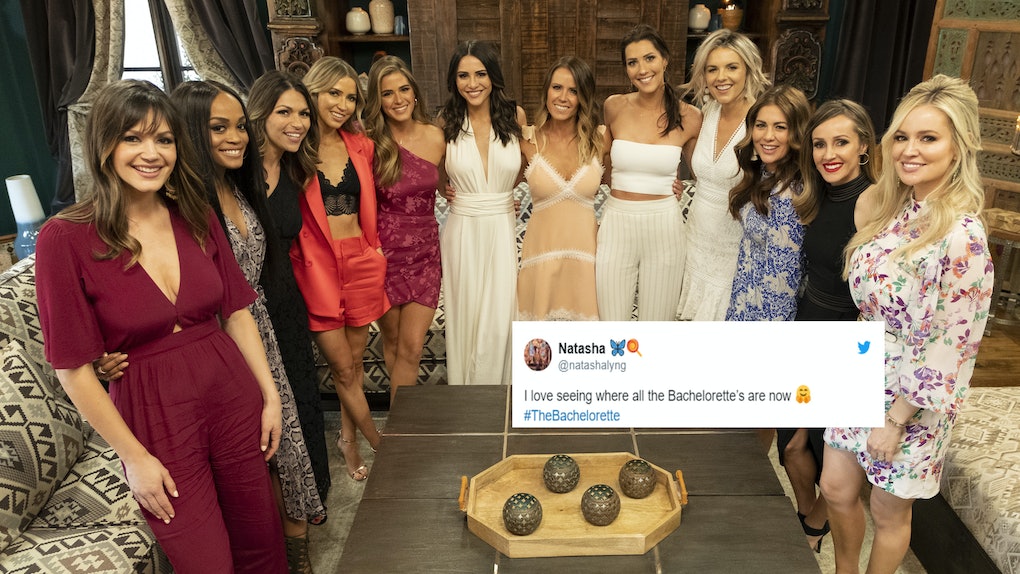 No sisterhood is as exclusive as that of The Bachelorette, but thanks to May 6's reunion special, Bachelor Nation caught up with the former leading ladies as if all of its members gained access to the gang's group text. Compared to a typical Bachelorette season, the drama was relatively tame, but fans loved seeing some of their old favorites back at the mansion. These tweets about the Bachelorette reunion special prove that viewers loved this dose of nostalgia.

Ahead of the premiere of Hannah Brown's Bachelorette season, 12 of the show's past 14 stars returned to Bachelor Mansion to commemorate the milestone year in May 6's two-hour reunion episode. Whether their onscreen relationships led to marriage and babies or a nasty breakup, the ladies poured some wine and gabbed together about it all. It was definitely a little trippy seeing so many of the franchise's stars in one room, but this was what crossover dreams are made of. Host Chris Harrison even previously told Entertainment Weekly, "I was a little more sentimental and emotional than I thought I was going to be [at the reunion]."

Because of scheduling conflicts, the reunion was missing Season 2 and 3 Bachelorettes Meredith Phillips and Jen Scheftt, but the missing ladies were included in commemorative footage. Before the ladies in attendance welcomed a bus of Bachelor superfans to the mansion, Harrison and his bus tour revisited some of the franchise's most memorable moments and men. Memories of The Bachelorette may fade over the years, but it only required multiple montage reels to bring back all of these sparkly, boozy highlights.

It took awhile to reach the actual reunion part of this special, but fans were definitely into the trip down memory lane, taking to Twitter with their thoughts.

The special did try to spill some tea, but seeing as the women have all moved onto new phases and relationships since their time on TV, it was hard to believe these attempts would succeed. Well, as it turns out, never doubt the Bachelor bubble. Something about those mansion walls just inspires all the drama.

The episode featured recent interviews with some of the franchise's most memorable villains, but did we really need to reward these men's bad behavior with more airtime? Probably not, even if some of them recognized their past flaws. These recaps plus a lengthy bus tour focusing a tad too much on men for a Bachelorette reunion didn't sit well with viewers.

While viewers pointed out how flawed this idea was, many still enjoyed the rehashing of dramatic moments and its sweet reminders that we've been watching this for a very long time. Just as the Bachelorettes gushed over each other, fans aren't going to stop gushing about them any time soon.

While three former Bachelorettes are married to their Final Rose picks and three are still engaged to their last man standing, some other ladies are currently in Bachelor-related relationships. Season 11 Bachelorette Kaitlyn Bristowe is dating Season 14 contestant Jason Tartick, while Season 4 lead DeAnna Pappas Stagliano is married to the twin brother of a former Bachelorette contestant. Clearly, a Bachelor happy ending isn't limited to a Final Rose engagement, and Bachelor Nation sure is proud of its former stars. Thanks for catching up with us, ladies!

More like this
What Would An LGBTQ+ 'Bachelor' Season Look Like?
By Abby Monteil
Peter Weber’s Quote About How ‘Bachelor’ Producers Get Contestants To Kiss Is Wild
By Abby Monteil
Zac Clark's Quote About His Relationship With Tayshia Adams Post-'Bachelorette' Is Honest
By Corinne Sullivan
Stay up to date