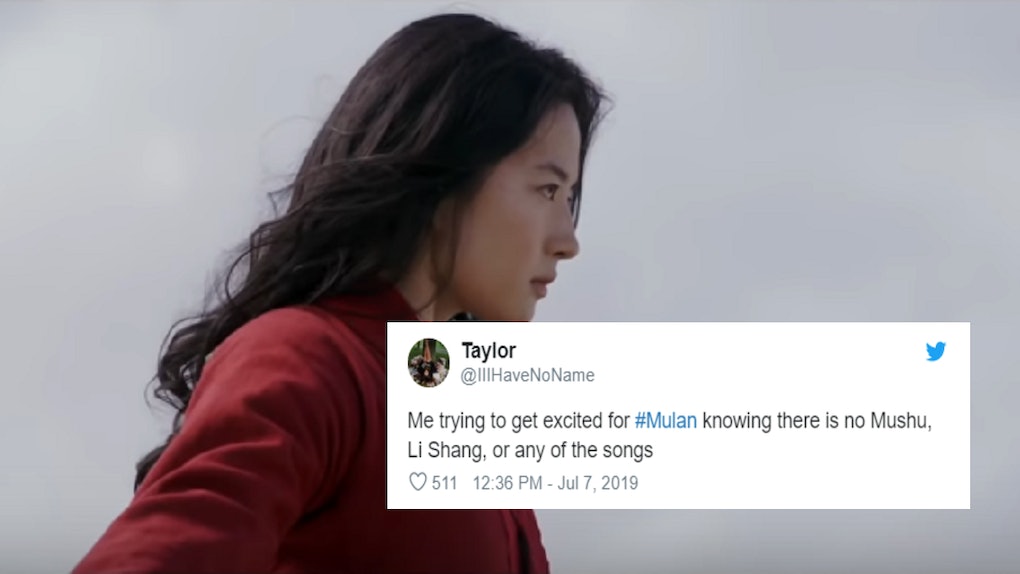 Disney brought honor to its fans worldwide when it released the first teaser trailer of its upcoming live-action Mulan adaptation on July 7. On Twitter, people squealed over the depiction of the Asian heroine and her journey from reluctant potential bride to fierce warrior, but the trailer was devoid of the musical numbers and animal sidekicks for which Disney's animated Mulan is best known. These elements being MIA were already public news, but tweets about Mushu's absence in the new Mulan trailer are seriously torn about this decision.

Starring Chinese actress Yifei Liu, Mulan is slated for a spring 2020 release, following the 1998 animated movie's plot of a young woman posing as a man to take her ailing father's place in the Chinese army. Walt Disney Studios' YouTube description of the teaser says that the new movie is also based on the poem "The Ballad of Mulan." The live-action teaser trailer also emphasizes Mulan's early obstacle of needing to marry in order to support her family, playing a matchmaker's assessment of her best qualities over footage of Mulan fighting in the army.

The brief footage definitely isn't lacking in empowering moments for the titular character, but many fans weren't pleased about the lack of Disney's original music, comical soldiers, the same love interest, and especially former family guardian Mushu. Director Niki Caro previously implied that the movie would have no musical numbers, while reports have surfaced saying that Mushu might be replaced with a phoenix character.

Until clearer information about Mulan's new sidekicks emerges, people have taken to Twitter to voice dislike of Mushu's absence.

Part of the appeal of Disney's live-action remakes is revisiting audiences' most beloved childhood characters, so those upset about a lack of Mushu definitely have understandable feelings. But on the other hand, the trailer's focus on Mulan and the discovery of her inner strength is exactly what the movie should highlight. Not only does the remake put a powerful woman front and center, but it also appears to be the kind of positive Asian representation that is rarely seen on such a well-known platform.

Another group on Twitter sees the Mushu controversy from this uplifting perspective, choosing to celebrate the film's uniqueness rather than what it's lacking. After all, a remake isn't supposed to be a perfect copy of an original movie, right?

While the jury's still out on a Mushu replacement, Caro has revealed that music will play a role in Mulan in a different way. In 2017, she told Entertainment Tonight, "The live-action is based on that inspirational Chinese ballad and on the animated Disney classic. We're still exploring the role that music's going to play in it, but for sure there will be music."

In addition to Liu, the Mulan cast includes Donnie Yen as Commander Tung, Jason Scott Lee as Böri Khan, and Yoson An as Cheng Honghui. Mulan is in theaters on March 27, 2020.