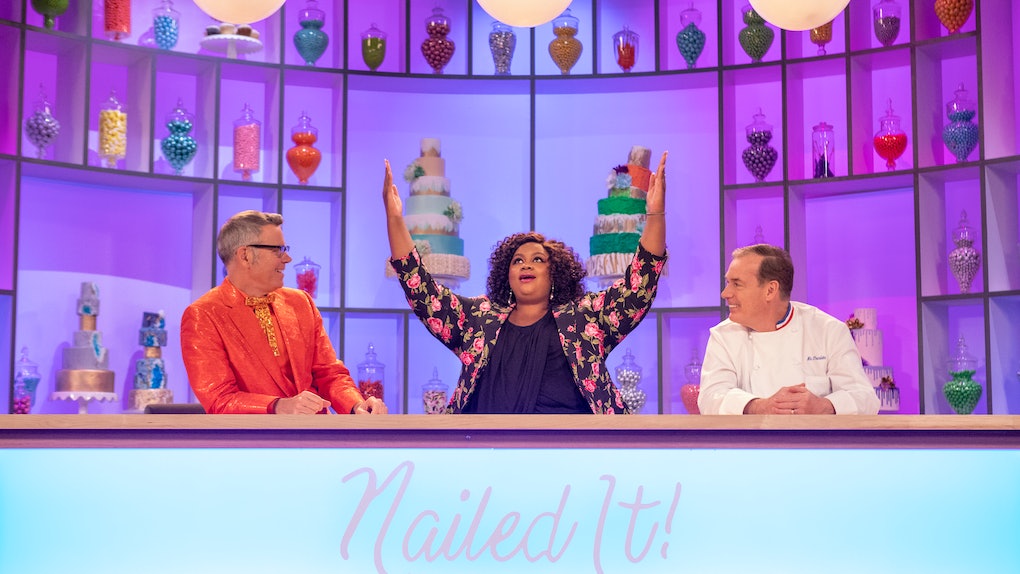 If there's one thing people can agree on in 2020, it's that people need an escape from the everyday. Whether it's intriguing dramas, puzzle-box mysteries, or laugh-a-minute comedies, everyone needs a series to help distract them from the turbulent times. And, surprisingly, reality competition TV is here to provide. The genre has slowly undergone a radical transformation, turning it into a kinder, gentler celebration of creativity. These soothing competition shows to stream are perfect for anyone who needs a brain break.

There's been a drastic shift in the reality show landscape in the last decade. When the format first took hold of viewers, cruelty was the big dreak, whether people backstabbed each other on Survivor or Simon Cowell sneered at bad singers on American Idol. But with the rise of The Great British Baking Show and others, a new type of series now dominates the landscape. In these reality competitions, the contestants (and the hosts and the judges) are here to make friends. They come to each other's aid during disasters and comfort them when a challenge goes awry. Sure, they want to show off their best work, but winning isn't everything. The real trophies are the memories they made along the way.

The Great British Bake Off (known in the U.S. as The Great British Baking Show) is the quintessential soothing reality competition series. The seasons featuring the original lineup of Sue and Mel and Mary and Paul are the best ones, but the later ones with Prue have their charms too.

Make sure to check out all the episodes available on Netflix beyond the initial eight collections, including the ones listed under GBBO: The Beginnings, GBBO: Masterclass, and of course, the GBBO Holidays specials.

2. 'The Great Pottery Throw Down'

There have been two successful spinoffs of GBBO in the UK. The first, The Great British Sewing Bee, hasn't made it across the pond yet. But the second, The Great Pottery Throw Down, was recently picked up by HBO Max. The creations might not be edible in this series, but the good feelings still run high, even on Toilet Week. All three seasons are currently available on the streamer.

GBBO's success has spawned dozens of imitators, including this glass-blowing variation from Canada's Makeful channel. For those who prefer things a little hotter, this miracle of melted sand produces some gorgeous artwork. Despite the production arm of the show, the cast isn't strictly Canadian, with both the host and chief judge hailing from the U.S. So far, the series only has one season on Netflix. Season 2 will hopefully come in 2021.

The closest American television has come to a homegrown version of GBBO, Making It brings the same good feelings and "up with amateurs" vibe to the handcrafting set. It helps that hosts Amy Poehler and Nick Offerman genuinely seem to love the creations on offer, and judges Dayna Isom Johnson and Simon Doonan know how to gently handle those who struggle. Peacock currently has both seasons on streaming. (A third season is expected next year.)

Most barbeque grilling competition shows are rough-and-tumble white men being men over giant flames. Not so much with American BBQ Showdown. The series, which debuted on Netflix in summer 2020, has the distinction of being one of the most diverse casts assembled on these types of shows. Moreover, it adds a special Southern charm to the formula, creating something different and juicy to enjoy.

Forget the Bachelor franchise and its deep reliance on engagements and marriages, most of which never come to fruition anyway. Over on Hulu, there's a far more chill reality dating competition that doesn't take itself nearly so seriously: Love Island. From hilariously bizarre make-out battles to utterly ridiculous behavior, the series is a cult hit precisely because it never forgets to be fun.

Perhaps the most esoteric of the crafting competition series, The Big Flower Fight is a pure Netflix production instead of imported from the UK or Canada. Hosts Natasia Demetriou and Vic Reeves are super funny, and once the petals start flying, the giant floral arrangement creations are truly astounding. The first season is on Netflix.

Developed around the same time as GBBO, the reality makeup competition Face/Off was initially conceived as "Project Runway for the Syfy Channel." One can see the inspiration in the show's format, but the attitude is wholly different. Artists drop everything to help their fellow competitors, as everyone has it ingrained in them that the primacy of a finished product for the camera matters above all else. That dedication to the art made this one of SyFy's most popular programs for the 13 seasons it was on the air. All are now streaming on Peacock.

Shows like GBBO feature amateurs who surprise and warm hearts with their hidden skills. On the other end of the spectrum, Nailed It! reminds viewers that not everyone is so gifted, and that's OK. Even though the results of the challenges on this show are frequently hilariously bad, hosts Nicole Byer and Jacques Torres are always encouraging and here for anyone brave enough to put themselves out there. Along with the four seasons and holiday specials, make sure to also check out the international versions of the show, including ¡Nailed it! México, Nailed It! Germany, Nailed It! Spain, and C'est du gâteau!

A beautiful lovechild of Pose and Project Runway, Legendary debuted with HBO Max's launch. The series is a voguing competition bringing NYC's ballrooms to the masses in a gloriously inclusive fashion space. HBO Max recently renewed the series for a second season, so fans can settle in knowing there will be more "Superior Houses of the Week" to come. Season 1 is streaming now.

The British version of SyFy's Face/Off concentrates more on the industry's glamour end than the monster movie makeup side. But the same spirit of helping your fellow contestants remains, as does the dazzling displays of what can be achieved on the canvas that is the human body. Both seasons are currently on Netflix.

Project Runway isn't on this list because the bouncing from Bravo to Lifetime and back made securing the streaming rights to the show deeply difficult. But since Heidi Klum and Tim Gunn recently took themselves off to Amazon anyway, fans will not have to go without. Their brand-new refashioned take on the series is called Making The Cut. It's more globally-minded than its American predecessor, and it also includes the designers having seamstresses to help achieve their sartorial goals.

Netflix's latest food competition series, Crazy Delicious, takes a page (and a few judges) from Food Network and then ups the budget substantially. The dishes and the contestants are pretty basic, but the way the challenges are presented is fun, and the beauty of the set is ridiculously over the top in the best way possible. So far, there's one season on Netflix.

One of Food Network's most popular cooking competition shows ever, Chopped has been running so long, it's on Season 47 as of this writing. From the baskets of weird ingredients to the contestants' well-edited professionalism, this series is endlessly watchable. With 16 seasons on Hulu, plus the dessert-themed Chopped Sweets to boot, fans don't have to worry about running out of episodes anytime soon.

Other than Trading Spaces, there aren't too many good interior design competition shows out there. But the BBC finally seems to have nailed it with the new show Interior Design Masters. The show mainly focuses on designing commercial spaces, which is one of the key ways it succeeds. The first season only arrived on Netflix a few months ago, and hopefully, a second season will go into production soon.

If there is one ultimate cooking competition, it is the Japanese series Iron Chef from the mid-1990s. Sadly, it's not streaming anywhere, but Hulu has the next best thing: The U.S. remake starring Alton Brown and Mark Dacascos. The series ran for 13 seasons and featured a rotating cast of nine Iron Chefs and more secret ingredients than you can shake an amuse bouche at. It also spawned spinoffs, The Next Iron Chef and Iron Chef Gauntlet. Two seasons of Iron Chef America are available to stream on Hulu.

Netflix's attempt at its own Project Runway-style series only lasted one season, but Next In Fashion is still a whole lot of fun. Starring Queer Eye's style guy Tan France alongside British fashion personality Alexa Chung, it's got more of a global sensibility, and the show's commitment to diversity in its casting makes this show a standout in the field.

Food Network hit a homerun when Guy Fieri won Season 2 of The Next Food Network Star. The network's homegrown Kelly Clarkson of food-based TV shows, Fieri has created monster hits with shows like the endlessly running Diners, Drive-Ins & Dives. His reality competition Guy's Grocery Games is similarly supremely watchable, with Fieri treating both competitors and judges with a gentle respect all hosts should study. Of the show's 20 seasons, seven are currently on Hulu.

Most of Netflix's reality cooking competitions take their cues from GBBO, but not Sugar Rush. Unlike the others on this list, it's inspired by Australian TV — specifically, Zumbo's Just Desserts, which is also on Netflix. Both shows star Australian pâtissier Adriano Zumbo as the primary judge. Zumbo spent nearly a decade on the Aussie version of Masterchef before launching his dessert-themed series, and his dedication to being fair-minded is evident. There are three seasons so far, as well as holiday specials for fans to spoil their dinner with, plus the spinoff Sugar Rush: Extra Sweet.

Even the History Channel has gotten into the soothing reality competition act, with Forged In Fire, a blacksmith-and-bladesmithing competition. One part history lesson, one part skilled design creation, and one part stabbing things for fun, Forged In Fire's greatest strength is in the camaraderie between the contestants that develops in every episode. There are seven seasons in all, but only Season 6 is currently streaming on Netflix. The other seasons are on Hulu.