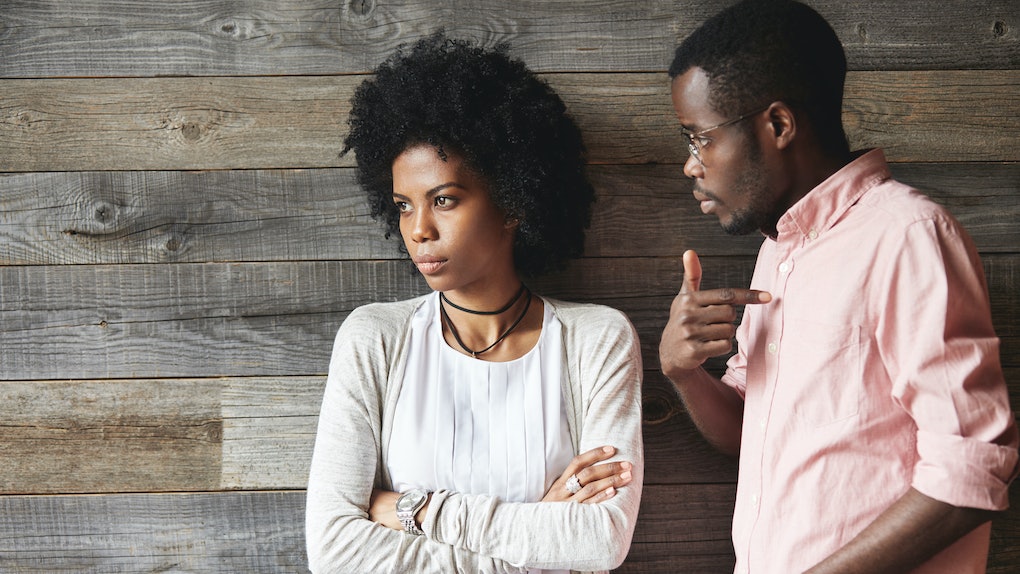 Yes, it would be absolutely fantastic if your significant other just somehow managed to absolutely never annoy you. But that's just not usually the case. Even in the best relationships, it's inevitable that your partner is going to do one thing or another to get on your nerves sometimes. Having pet peeves in relationships is totally normal. Actually, it's so normal that women in a recent Reddit thread came together to share the less-than-lovely traits their partners have that they choose to ignore.

Yep, you read that correctly: ignore. I mean, let's weigh out the options here. On the one hand, you could pick a fight with your partner every single time they chew their pasta in that cringe-y way that makes you want to wear noise-canceling headphones. But is anything good really going to come from that? Probably not. Instead, you can choose to ignore the weird chewing and, instead, save the fight for something that actually matters.

Now, this isn't to say that you shouldn't say something if the annoying thing your partner's doing is really bothering you. If you're really, truly upset the best thing you can always do is just sit down and talk it out. But if you're just slightly annoyed by something totally harmless, then maybe it's time to pick your battles.

He refused to see a doctor.

His unwillingness to see a doctor when he is sick. Seriously, I don't get it and it's obviously bad for his health

My girlfriend and I have a lot of food differences. I love love love broccoli and egg noodles, but she does not like broccoli at all and the smell of egg noodles makes her sick. On the other hand, she really likes sour fruits and I think her habit of eating lemons is f**king terrifying!!

He sometimes can be (unknowingly) very selfish and makes decisions that best suit him, not considering the feelings or effects it has on anyone else. We're working on it though.

He shakes his drink and it makes an annoying noise.

He shakes his drink (and 84000 ice cubes) - EVERY TIME - before taking a drink. The sound is so annoying.

They have different sleep schedules.

He’s someone that can live off 4-5 hours a sleep each night, whereas I need at least 8-9 hours. So we never go to bed together. He makes up for this by laying down with me when I go to bed and waits until I fall asleep and then gets back up but I still hate it.

He's constantly on his phone.

He is ALWAYS on his phone. Before work, after work, while we are talking, while I'm sleeping... It doesn't stop. He's either on reddit, YouTube or Instagram. Getting him to drop the phone and do something with me can be quite a challenge unless it's cooking. He is a foodie so cooking will get him away from the phone.

He hates broccoli, and I LOVE broccoli. Any dish I want to put broccoli in, I have to make him his own without it.

He refuses to shower before bed.

That he showers each morning but then digs bike jumps in the woods in the evening and doesn’t shower again and I have a fabric bed frame in light blue which now has a brown mark where his head goes. I keep telling him I’m so peeved about it but he won’t do anything to change it. Winds me up so bad. Arrggghhhh oh well, I’ve told him he can buy the next bed and better get a wooden frame.

He refuses to eat healthy.

His unwillingness to eat healthy. I‘m not the healthiest eater either, but I love to cook veggies and to eat fruit. He wont even touch an apple. When I‘m cooking at his place, I started to smuggle in vegetables into our food and he doesn‘t mind that much because he loves my cooking. But he‘s sick every couple months, just colds but still. He understands that I want him to stay in good health and has started to try more diverse food.

He has an annoying laugh.

ill ask him to do something and he says yeah but then forgets so he gets mad when i expect him to do it right away even though he forgets. an endless battle, but im annoying too so it works out lol.

His obsession with games (computer games/board games) and watching YouTube videos about them all. the. time... Lol

My bf hates cheese and creaminess. Those are some of my favourite foods and textures. I'm the cook in our house, so I either have to make two dinners or put my deliciousness on the side to be added later to my own meal. It's extra work and/or I miss out on tasties, but I love him anyway.

He hangs his clothing on a chandelier.

When he has a serious interview or event, he hangs his clothes on the chain from our dining room chandelier. He also will do this on the doorframe of our closet. Super annoying but I laugh every time he does it.

He had a gross car.

It was his ugly a**ed, money pit of a car. He loved that car. As long as it made him happy and I didn't have to take care of it, I never said a word against it. His not returning that sentiment about the things that interested me is part of what broke that relationship.

She hates onions. Onions are one of those things I would put in EVERYTHING if I could, like garlic! They're such an amazing flavour! The compromise is that I don't cook food for the both of us with onions in them, but I get extra onions on every burger or burrito I have. I guess her thing would be that my breath smells terrible from all the onions I continue to eat.

He can be conceited.

He can be quite full of himself and arrogant sometimes. But it is dealable

He's a very light sleeper so I have to wait for him to wake up before I could move around in the room in the morning or else he'd wake up before his time and be grumpy for the rest of the day.

He doesn't wipe the sink.

He doesn’t wipe up the sink or the dried up toothpaste on it after brushing his teeth/washing his hands. The dried up water on the counter bothers me so much! But I love the man and just clean it up.

I mean, let's face it. Nobody is perfect. You're never going to meet someone who is 100 percent flawless. Sure, they might not like your favorite food, but it's totally chill in the long run.