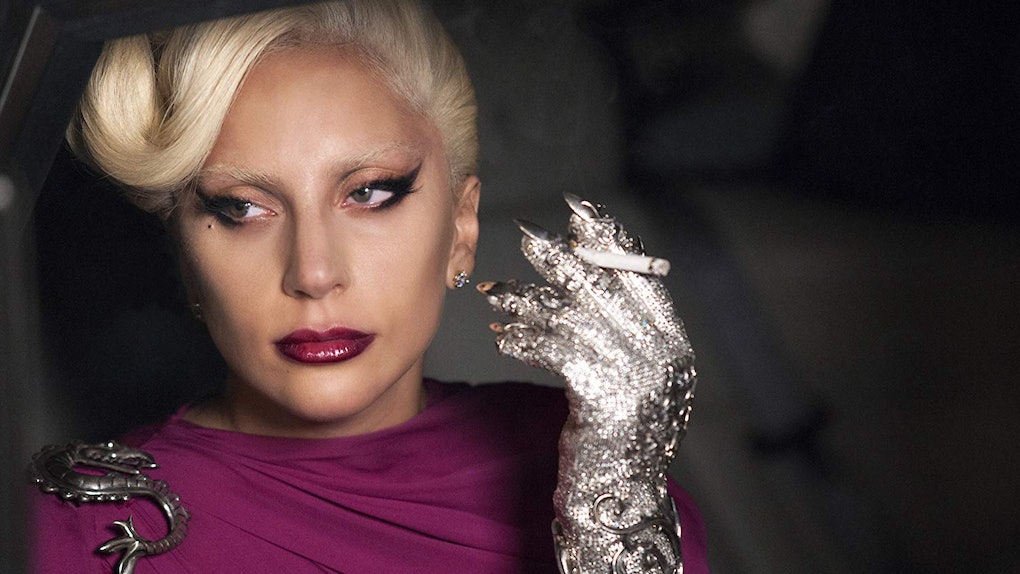 American Horror Story is a notoriously disturbing show that lives up to its name. For nine years now, the series has created shocking moment after shocking moment, mercilessly scaring its fans. Sometimes its with ghosts, sometimes with witches, and sometimes with asylum patients or serial killer psychologists. The list goes on. Since Halloween is a mere weeks away, I thought it would only be fitting if I gave anyone who's still pining over bygone summer a refresher on the show's top scenes to really get you in the fall mood. These 20 moments from American Horror Story will seriously mess you up.

And yes, I'm well aware that literally every single episode of every single season is jam-packed with horrifyingly memorable and jaw-dropping scenes. Ryan Murphy's superb writing and directing, accompanied by powerhouse performances by actors like Jessica Lange, Sara Paulson, Angela Bassett, Kathy Bates, and even Lady Gaga (which she won a Golden Globe for), are largely to thank. But still, in the forest filled with one scream after another, there are some next level messer-uppers that specifically stand out to me. So turn on the lights, because these 20 memorable moments are sure to send a chill down your spine, too.

1. And We're Gonna Let It Burn

Miriam Mead was sentenced to death in this scene of the show's eighth season, AHS: Apocalypse. The odd thing that got me here wasn't the burning, which the fans have definitely witnessed before. No, it was this one closeup shot of Miriam's burning body: red and enveloped in fire, yet her face looking happy and beaming as if from great pleasure. Nightmarish, indeed.

Since it's one of the most gruesome and terrifying seasons of the series, it's hard to pinpoint one particular moment from Asylum that hits the hardest. But the one where Shelley's amputated and tortured body crawls up to on the stairs of the schoolyard is definitely on the list.

The Butcher isn't the scariest thing on Roanoke. In this scene, Matt and Shelby find out that Mama Polk and her family don't shy away from some human flesh for their family dinners.

American Horror Story: Hotel also brought some paralyzing scenes with it. The one where two girls check into the place only to find a creepy creature crawl out of the mattress being one of them. I mean... look at that photo.

Watching Asylum back in 2012, I remember loving Oliver, the psychologist who was seemingly the only good thing in the entire place. Imagine my shock when he revealed that he was Bloody Face all along and captured Lana, treating her like his mother in some extremely disturbing ways.

In Episode 5 of AHS: Cult, a couple was found inside their house, dead and decaying in two bolted coffins. Viewers later learn that the season's horrific clowns invaded the couple's home, put them in coffins that they bolted shut and left them to slowly die. If not creepy enough, the scene was prefaced by the woman, Rosie, saying that therapy helped her overcome a childhood phobia of being buried alive.

Ma Petite was one of the only legitimately cheerful and kind characters in the history of American Horror Story. Dell, the resident strongman on AHS: Freak Show, crushed her little body amid a hug in a particularly disturbing episode.

Madame Delphine LaLaurie is probably the most truly evil characters in the entire series. In one of the most memorable scenes of Coven, she took one of her slaves (yes, slaves) after accusing him of raping her daughter, into her chamber of torture. There, she put a bull's head on the innocent man and chained him up. But what cemented the scene as truly horrifying were shots of the other people in the chamber, also tortured and chained up.

AHS: 1984 is still only a few episodes in, so there may not be too many gut-wrenching scenes to dwell on, but the flashback to Brooke's wedding where we see her jealous fiancé murder her brother, his best man and then shoot himself is definitely one to remember. It's bloody, terrifying, and downright disturbing.

In an episode of AHS: Hotel, viewers witnessed the horrifying Addiction Demon use a deadly strap on to kill Garbiel. Ryan Murphy described this particular scene as "the most disturbing scene we've ever done" up until that point. Yeah, I think that sums it up.

After finding out she was pregnant with Bloody Face/Oliver's child on AHS: Asylum, Lana Winters attempted to preform an abortion on herself using a coat hanger. The baby lived, however, becoming a killer as he grew older. The scene was certainly hard to watch.

13. The Reason Elsa Mars Is Missing Her Legs

This heartbreaking scene reminded the viewers that sometimes it's not the ghosts and the voodoo dolls who reek havoc on us, it's the humans. When Tate's backstory was revealed, the viewers learned the teenager was responsible for the Westfield High Massacre, in which he killed 15 students and permanently handicapped a school librarian.

Oz, Ally and Ivy Mayfair-Richards' son in Cult, was just excited to get a guinea pig that his moms allowed him to keep. His nanny didn't believe so, though, so upon coming home the young boy found his new pet reheated to death in the microwave. The one was a stomach-churner.

16. Violet Finds Out The Truth

In Season 1, Violet attempts suicide by swallowing pills, but Tate gets to her just in time and pulls her back from near-death. The twist came in a later episode however, when Violet found her own decaying body in the house, realizing she did die that day and that she's been a ghost ever since.

In this Season 6 scene, the Polks, a family of North Carolina cannibals, captured Lee, Monet, and Audrey. They seasoned Lee's leg and then forced Audrey and Monet, who plays Lee in the My Roanoke Nightmare reenactments, to eat it as a dish.

Freak Show gave fans another terrifyingly heartbreaking moment when Penny, a girl who fell in love with the tattooed man from the circus, told her father she was going to live with him. He didn't let her out so easily – he drugged , tattooed, and shaved her and then forked her tongue.Yeah. It was dark.

In Coven, Cordelia discovered the upside of being blind, so when her sight was restored, wishing to return to her previous state, she plucked her own eyeballs out with pruning shears. Yikes!

Let's finish up with another harsh Madame Delphine moment from Coven. When one of her slaves gave birth to a baby who she believed was fathered by her husband, Delphine killed the child in front of its mother and then applied the blood to her face, like some sort of a serum.

As you can see, the cult TV show is littered with scary, gruesome, and shocking moments, incomparable to anything else on air. This list could be double its size and I'd still have plenty of gut-punching moments to go through. Until then though, maybe you'll consider making AHS your next horror TV night. Just remember not to eat anything but a light snacks when you're watching it.