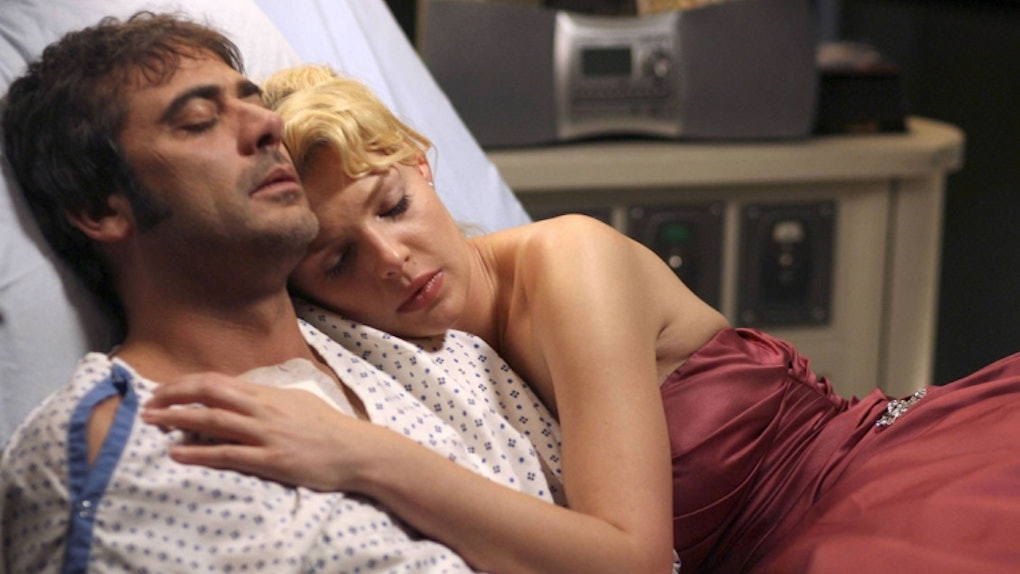 20 Heartbreaking Moments From 'Grey's Anatomy' That Will Make You Sob

Grey's Anatomy has returned for its 16th season, continuing its reign as the longest running TV medical drama in history. That means longtime fans of the show have watched a whole lot of medical moments and dramatic events, most of which probably made them bawl their eyes out. After all, the ABC series is known for pulling at fans' heartstrings in a variety of ways, from tragic character deaths to devastating breakups. There are many more where these came from, but here are 20 of the most heartbreaking moments from Grey's Anatomy that will have you sobbing.

Let's be real: Nearly every episode of Grey's Anatomy has at least one scene that'll make even the most stoic of viewers tear up a little. It's all a part of the experience of watching the show, along with all the hospital make-out sessions and quirky patient cases, of course. Grey Sloan Memorial Hospital has seen more than its fair share of tragedies, from plane crashes to disastrous storms to mass shootings. But it isn't just the pure spectacle of tragedy that riles up Grey's fans' emotions. Grey's Anatomy does an excellent job of getting audiences truly invested in all the ups and downs of its characters' lives. That emotional investment is what makes all these moments truly heartbreaking.

This one was such a gut punch. It seemed like everything was finally going to work out for Izzie Stevens (Katherine Heigl), her patient Denny Duquette (Jeffrey Dean Morgan), and Denny's malfunctioning heart. However, in Season 2 Episode 27, Izzie went to show Denny her dress for the hospital prom, only to discover he died suddenly from a simple blood clot.

Poor, sweet George O'Malley (T.R. Knight). In the Season 5 finale, the Grey's writers pulled a fast one on audiences by revealing that a John Doe on his deathbed was actually the beloved George. Hearts were broken even further when George appeared to Izzie in a vision, making it clear to her and the audience that he'd moved on to the afterlife.

Derek Shepherd (Patrick Dempsey) was Meredith Grey's (Ellen Pompeo) one great love. So when he died in Season 11 Episode 21, it was the heartbreaker to end all heartbreakers.

One of the most memorable patient cases came early on in the run of the show, in Season 2 Episode 6. A man and woman were impaled on the same pole, and they knew that one of them had to die for the other to live. Talk about a heart-wrenching decision.

In Season 8 Episode 24, a bunch of Grey Sloan doctors were passengers on a plane that crashed in a remote forest. They spent a few excruciating days trying to survive, and they would feel the aftermath of the crash for a long time after. One of the biggest problems was the emotionally-charged death of Meredith's sister, Lexie Grey (Chyler Leigh), in the middle of the forest.

Another one of the effects from the plane crash was the death of Mark Sloan (Eric Dane). At first, it seemed like he had survived the crash and was going to make it, but a sudden downturn in his health in the Season 9 premiere made it clear he was destined to end up passing on just like his on-again, off-again lover Lexie.

Much of the beginning of Grey's Anatomy dealt with Meredith's mental health issues, so it was especially poignant in Season 3 Episode 16, when audiences watched her give up on fighting to live and let herself drown. Of course, her hospital family wouldn't let her go, and this ended up being just another struggle Meredith would work through.

8. Meredith Finally Got Her Mother's Approval

A lot of Meredith's mental health issues hark back to her issues with her mother Ellis (Kate Burton), whose approval Meredith was always after. But when Meredith was in a coma after drowning, she has a vision of her mother telling her everything she ever wanted to hear from her: that she was extraordinary. This made it even more painful for Meredith to wake up from the dream and find out her mother had actually died.

9. Burke Left Cristina At The Altar

Just as Grey's Anatomy can wreck fans with tragedies and deaths, it can also cause emotional pain with relationship drama. This was never more evident than in the Season 3 finale, when Preston Burke (Isaiah Washington) left Cristina Yang (Sandra Oh) at the altar. The audience watched her cry tears of both relief and sadness as Ingrid Michaelson's "Keep Breathing" played.

Meredith's relationship with her mother was fraught, and her relationship with her absent father Thatcher Grey (Jeff Perry) wasn't much better. When his wife died during a surgery that Meredith scrubbed in on in Season 3 Episode 23, Thatcher took out all his rage and despair on his daughter by slapping her. It was a sad moment that made audiences realize Meredith really missed out on having the kind of parental love she deserved.

The entire Season 6 finale could go on this list, since every second of the gunman roaming the hospital in the episode is emotionally heavy. One particularly standout moment, though, was when Cristina was forced to operate on Derek and try to save his life, all while being held at gunpoint.

It was all smiles and hope for Arizona Robbins (Jessica Capshaw) and a pregnant Callie Torres (Sara Ramírez) at the beginning of Season 7 Episode 18. That all changed when they got into a car accident that nearly took the life of Callie and their baby, who was delivered premature.

Cristina and Meredith's friendship will go down in history as one of the all-time greats, so the moment Cristina said goodbye to Meredith in Season 10 Episode 24 will also go down as one of the most heartbreaking farewells ever. At least they got to dance it out one last time.

In Seasons 3 and 4, it seemed like Alex Karev (Justin Chambers) had finally found love with an amnesiac patient named Ava (Elizabeth Reaser), who later discovered her real name was Rebecca Pope. However, Alex and Ava/Rebecca would never have the love story they hoped for, because she needed more mental health help than Alex could offer her.

Teddy Altman (Kim Raver) originally only married patient Henry Burton (Scott Foley) so he could use her insurance, but as fans know, doctor-patient relationships rarely go well on Grey's Anatomy, and Teddy actually started to fall in love with Henry. It was heartbreaking to watch him die in Season 8 Episode 10, just as Teddy was ready to fully commit to being with him.

Fans were rooting for April Kepner (Sarah Drew) and Jackson Avery (Jesse Williams) to start their family, but unfortunately their unborn child had a rare disease that made it unlikely he would survive. April decided to give birth anyway, and the few moments they got with their son Samuel in Season 11 Episode 11 before he died are truly heartbreaking.

Richard Weber (James Pickens Jr.) was with his wife Adele (Loretta Devine) for much of his life, so her death in Season 9 Episode 10 was pretty devastating. It was even more touching for audiences to watch Richard then go to Miranda Bailey's (Chandra Wilson) wedding to support her, right after Adele died, so he could support his friend.

Maggie Pierce (Kelly McCreary) was a late addition to Grey's Anatomy, but as Meredith's biological sister, she immediately became an important part of the show. Audiences learned she was especially close to her mother Diane (LaTanya Richardson Jackson), so it was hard to watch Maggie sit at her deathbed in Season 13 Episode 18.

Jo Wilson (Camilla Luddington) spent her whole life wondering who her mother was. When she finally met her in Season 15 Episode 19, she was devastated to discover she was conceived under violent circumstances and her mother didn't want anything to do with her.

This one is bittersweet. In Season 15 Episode 11, Meredith learned her father Thatcher was in hospice care and only had a few days left to live. She went to see him one last time, and they both received a bit of closure, even with their strained relationship.

Make sure you keep the tissues on hand when you revisit all these moments. The good thing about Grey's Anatomy, at least, is that it balances out a lot of the sadness with plenty of humor and romance, too.