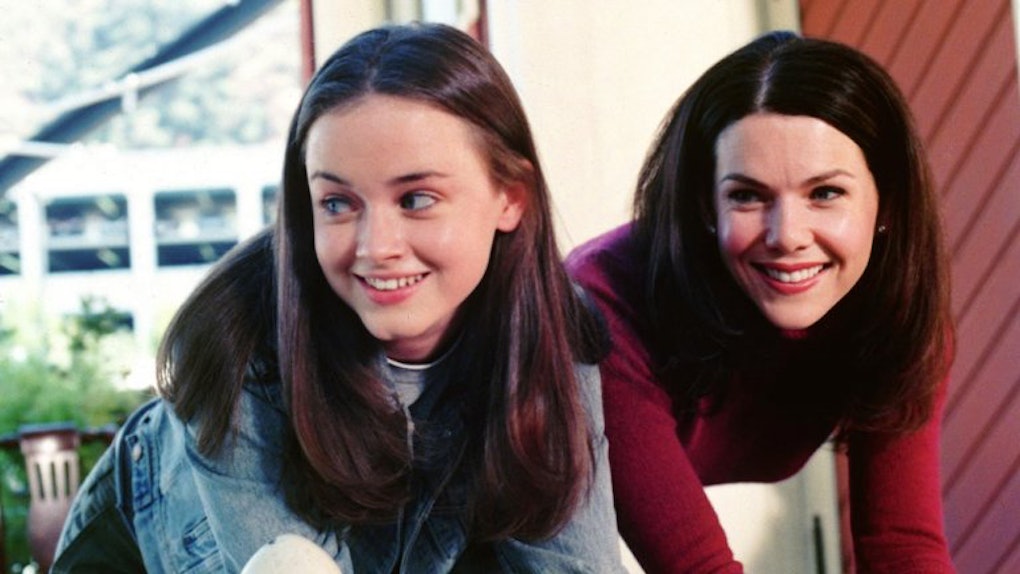 The Girlmore Girls fandom goes hard. From attempting to emulate the characters' fast-talking ways of Lorelai and Rory to being proud of drinking potentially unhealthy amounts of coffee, people who love the show really, well, love it. It's not hard to see why; the classic series has everything you could want from your marathon-viewing experience: romance, laugh-out-loud jokes, and endless pop culture references. But even the most avid viewers may not know it also has a fascinating filming history, as these Gilmore Girls behind-the-scenes facts prove.

Gilmore Girls aired from 2000 to 2007, but it continues to live on in streaming on Netflix. Plus, fans were treated to the revival series Gilmore Girls: A Year in the Life in 2016, so they've never really had to be without the Gilmores for too long. The delightful show follows the lives of mother and daughter Lorelai (Lauren Graham) and Rory Gilmore (Alexis Bledel), and the quirky cast of characters they interact with in and around their small town of Stars Hollow. But while the on-screen adventures and heartwarming moments of the mother-daughter duo provide plenty of entertainment on their own, there's a whole other, behind-the-scenes side of the series for fans to fall in love with.

1. Stars Hollow Is Inspired By A Real Small Town

Creator Amy Sherman-Palladino was so enamored with the small town of Washington, Connecticut, she wanted to capture its magic in a TV show. During a random trip there, she came up with a rough outline for Gilmore Girls that was based around the quaint town.

2. Alexis Bledel Had Never Acted Before She Was Cast

Bledel was an NYU student working as a part-time model when she decided to audition for Gilmore Girls on a whim. Clearly, it worked out for her.

Each Gilmore Girls script was filled with pop culture references, but it was up to the actors to look them up on their own time. Otherwise, they usually wouldn't understand what they were saying, according to Bledel.

Borstein had to turn down the role because she was working on MadTV. Instead, Melissa McCarthy was cast, but of course, Borstein would go on to work with Amy Sherman-Palladino on another famous show: The Marvelous Mrs. Maisel.

5. Jackson Was Originally A Much Smaller Part

Jackson (Jackson Douglas) was originally written as a guest role, but Douglas had such amazing chemistry with McCarthy that the writers gave him a bigger part as Sookie's husband. The rest is TV history.

6. Luke Was Originally A Woman

A first, Luke's character was a woman named Daisy. However, they changed his gender in order to give Lorelai a possible (hetero) love interest. It was a smart move, because Luke and Lorelai were so obviously endgame.

Weil played Rory's private school frenemy Paris, but she first tried out for the role of Rory herself. When she found out she didn't get the part, she learned Sherman-Palladino had her in mind for the role of Paris instead.

Rory and Jess (Milo Ventimiglia) are one of TV's all-time great couples, and that might be because the actors had chemistry off-screen as a real-life couple. They even continued dating after their characters broke up on the show.

9. Ryan Gosling Auditioned For The Show

A casting director had put Gosling in a movie right before Gilmore Girls, so she was excited to bring him in for the show. Unfortunately, his audition fell completely flat and he wasn't cast.

10. The Town Hall Scenes Would Take All Day To Film

The town hall meetings are fun to watch because they bring the whole town together. That's also the reason they would take up to 15 hours to film. Wrangling all those people in one place turns out to be really hard work.

12. Keiko Agena Was A Lot Older Than Her Character

Agena played Rory's best friend Lane, who's supposed to 16 at the start of the series. But in real life, Agena was 27 when Gilmore Girls premiered.

The Gilmore girls are known for chugging coffee, but Bledel couldn't stand it. Instead, all her mugs and cups were filled with cola.

Sean Gunn's character Kirk shows up in all kinds of jobs throughout the series, but the first time he's on screen in Season 1, he plays an entirely different character named Mick.

15. Chris Pine Auditioned For The Show

Sadly, Pine was turned down. TBH, he's not even sure who he would have played, but he thinks "probably a boyfriend."

16. Jess Was There To Be An Obstacle For Luke & Lorelai

Sherman-Palladino said she was always looking for ways to keep Luke and Lorelai apart so their love story could last longer. One of those ways was to bring in Luke's bad-boy nephew as a love interest for Rory.

17. The Food At The Friday Night Dinners Was Pretty Bad

Lauren Graham loved filming the Friday night dinner scenes at Richard and Emily's house. But, even though the meals looked fancy on camera, Graham said they actually tasted pretty bad.

Bledel learned Spanish before she learned English. So when there are scenes of her struggling to speak Spanish, she's pretty much doing some of the best acting of her life.

19. There Were A Lot More Than 1,000 Daisies On Set During That Famous Proposal

When Max Medina (Scott Cohen) proposed to Lorelai, he did so in a room filled with "1,000 yellow daisies." The only problem is that 1,000 flowers actually doesn't look like very much on camera, so the crew had to keep making trips to get more and more flowers.

20. There Was Almost A Rory-Focused Spinoff

Graham talked about producing a spinoff series that would have focused only on Rory, but the idea proved to be too complicated and so it was scrapped.

As much as a spinoff series would have been a treat for fans, the good news is, there's plenty of Gilmore love still to be found on Netflix now.

More like this
These Fake 'Riverdale' Brand Names Are Even Better Than The Real Thing
By Rachel Varina
What Are The Eldritch Terrors In 'Chilling Adventures Of Sabrina'? They're No Joke
By Dylan Kickham
6 ‘Schitt’s Creek' Spinoff Ideas That Are Simply The Best
By Rachel Varina
Stay up to date