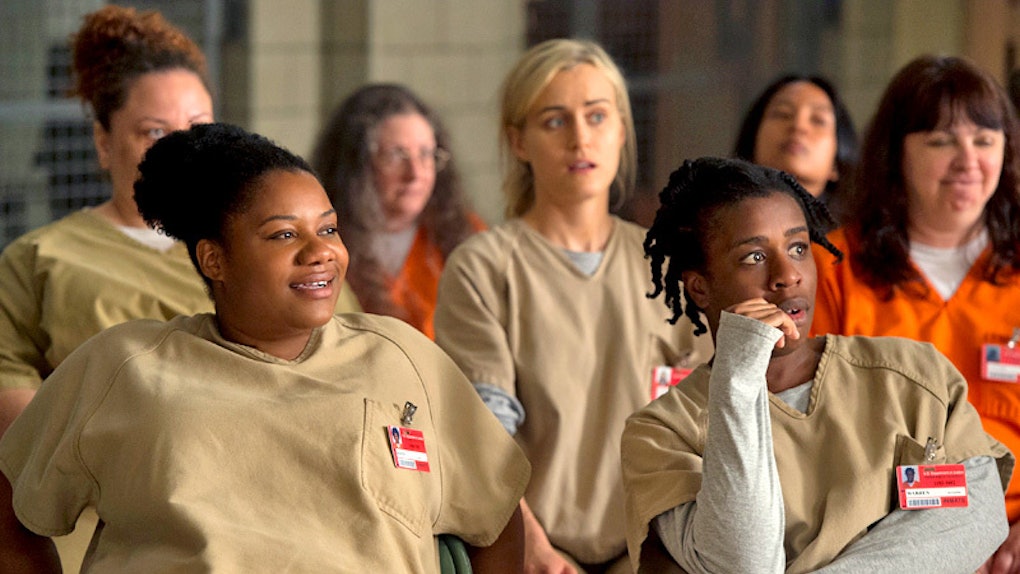 After seven seasons of serving time, the ladies of Litchfield are finally getting out. Well, they might not all be getting out, but their series Orange is the New Black is coming to an end. The series became an instant hit when it premiered on Netflix in 2013 as one of the streaming platform's first original series. It'll be hard to say goodbye after six years, but luckily fans have all of the previous six seasons on Netflix to help ease the transition. If you're looking to take a walk down memory lane, then here are 20 of the best moments from Orange is the New Black to help you get ready for the final season.

It was really hard to narrow down the best moments from Orange is the New Black to a list of only 20. Each season of the show has been filled with stories that span the emotional spectrum. Over the years the characters have had big life changes; romances have bubbled up, babies have been born, and beloved characters have died. But the show has also always succeeded in its small, quirky details too, like the characters' book clubs and fights over control of the kitchen. With such a large ensemble of such nuanced characters, the show has had no shortage of memorable moments.

1. Piper and Alex Meet in Prison for the First Time

In a way, Orange is the New Black has always been a love story. In the first episode of the series, Piper Chapman (Taylor Schilling) spends her first day in prison after her ex-girlfriend Alex Vause (Laura Prepon) turned her in. Their relationship is a heated knot of love and hate, and there's no better moment to set it all up than when Piper sees Alex in prison for the first time.

Within Piper's first few days in Litchfield, she catches the (crazy) eye of Suzanne "Crazy Eyes" Warren (Uzo Aduba). Suzanne tries to woo Piper with some of the most memorable poetry I've heard to this day.

There's a rumor among the Litchfield inmates that there's a chicken that roams the land surrounding the prison and Red (Kate Mulgrew) wants to find it. When it suddenly appears, chaos ensues.

Poussey (Samira Wiley) gets teased a lot for the alternate pronunciation of her name. But she teaches everyone how to say it correctly, and gives everyone a lesson in punctuation while doing so.

Norma (Annie Golden) usually communicates nonverbally, so when audiences heard her voice during the Season 1 Christmas pageant, it was especially poignant.

Tiffany "Pennsatucky" Doggett (Taryn Manning) started out as an antagonist. But after she uses the the prison's money to snag a new set of teeth, audiences get to see her begin a transformation into a more empathetic person.

Miss Rosa (Barbara Rosenblat) was a mysterious character for most of her time on the show. But when she receives a terminal cancer diagnosis, audiences get to see her emotional past, and she gets to take one last joyride before she dies.

When the ladies realize they don’t know much about their own bodies, Sophia (Laverne Cox) takes on the role of health teacher and gives a few biology lessons.

The mock job fair gives all the ladies a chance to show off their skills, but it’s especially fun to see Taystee (Danielle Brooks) really shine.

On Valentine’s Day, the women share their funny and heartfelt definitions of love, and the results are highly quotable.

Cindy Hayes (Adrienne C. Moore) knows how to play a scene for comedy just as much as can for drama. There's probably no better example of that than when she decides to convert to Judaism just so she can get access to the (better tasting) Kosher food.

A hole in the prison fence gives the inmates a small taste of freedom. They spend their small respite swimming in a nearby lake in a beautiful scene.

Lolly Whitewhill (Lori Petty) provides a tender example of mental illness. It culminates in a heartbreaking scene of her building what she thinks is a time machine so she can go back to when life was easier.

14. Alex Buries a Body in the Garden

All of Alex’s drug dealing catches up to her when she needs to kill and dismember a body. The Litchfield garden was never meant for such dastardly purposes.

15. Judy King Gets the Star Treatment

When celebrity chef Judy King (Blair Brown) arrives at Litchfield, she’s treated to amenities most of the other inmates don’t have, including the chance to get high with one of the guards.

It's the gun that sparked a riot. After Daya Diaz (Dascha Polanco) gets her hands on a gun and shoots a prison guard, a riot ensues in Litchfield that lasts for all of Season 5.

Poussey’s death was one of the most devastating moments ever, and it led to Soso (Kimiko Glenn) honoring in late girlfriend in a beautiful way with a hanging book memorial.

During the Litchfield riot, the ladies get access to a smartphone. So Martiza (Dianne Guerrero and Flaca (Jackie Cruz) take advantage of the data plan and create a YouTube channel for their makeup tutorials - and get lots of fans, too.

19. Piper and Alex Meet in Max For the First Time

In Season 6, Piper and Alex reunite once again, only this time they're much happier to see each other than they were in the first episode.

Oh far these two have come. After all the super-tumultuous ups and downs of their relationship, they finally tie the knot. It might not be a legally-binding union, but it’s just as real as any other marriage. Now Season 7 will show audiences how this marriage fares with one partner in the real world and one still behind bars.

More like this
These Fake 'Riverdale' Brand Names Are Even Better Than The Real Thing
By Rachel Varina
The 20 Saddest 'Grey's Anatomy' Deaths, Ranked By How Hard You'll Sob
By Abby Monteil
'The Witcher' Season 2: Release Date, Cast, Trailer, & More Info
By Ani Bundel
Stay up to date