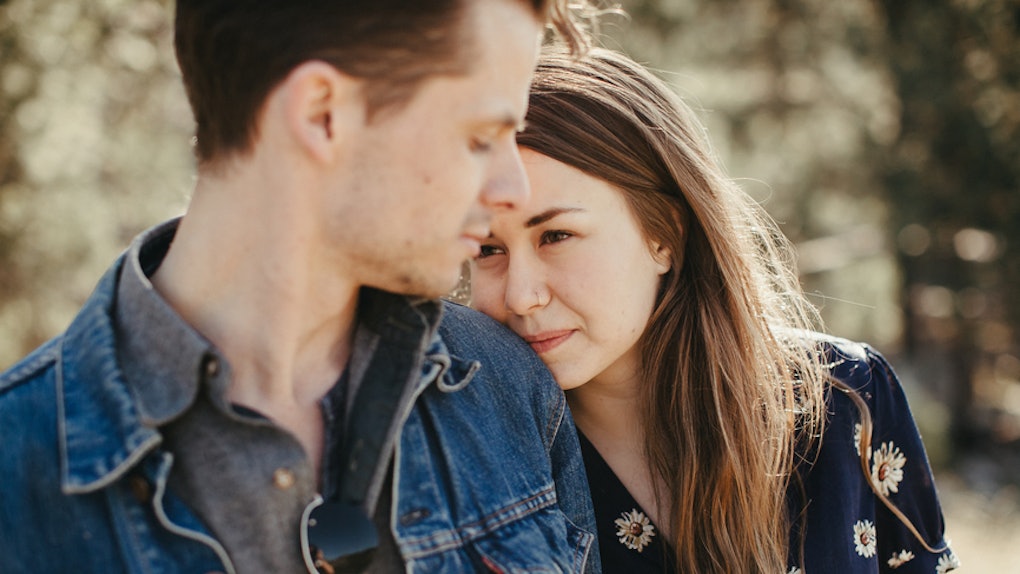 Falling in love is, for the most part, a wonderful thing. But, like most wonderful things, it has its drawbacks. For instance, when we're in the process of falling in love, we all have the tendency to overlook some red flags that we may have otherwise read into a bit further. Lots of times, these red flags don't end up being a huge deal (i.e. your partner's loud chewing seems cute in the beginning, but eventually it becomes actually annoying). But sometimes, the red flags at the start of a relationship can predict how your relationship will eventually end (i.e. you think they keep talking about their ex because they're adorably sensitive, but one year later, you break up because they're still hung up on them).

Recently, these women shared their own stories of ignoring red flags that eventually led to the demise of their relationships in a Reddit thread. Read along, and use these experiences as a guide, so you know some red flags you might want to be on the lookout for — or that you might even be ignoring.

"Ngaaaw. You're so cute when you think you have a choice in this".

He seemed playful at the time. Not so much now that I think back.

He assumed he knew everything about her.

He said something to the tune of ‘no one will ever understand you like I do.’

I thought that meant he was the kind of guy who would really get to know me. What that actually meant was that he had already decided that he knew me.

For the entirety of that relationship I was at odds with the girl he thought I was, or maybe the girl he wanted me to be. I’m still not sure, but it was exhausting.

I said ILY a few months into our relationship. He smiled and thanked me. A few months later and he had never said it spontaneously or even as "I love you too." When I finally asked, he said he just took time to get comfortable expressing his feelings. Five years later, and I was sobbing in marriage counseling (I know, that's how much I ignored this - I married him, ugh) asking him to say it or show it in a way I could feel. He never did.

He was hyper-focused on her appearances.

He constantly asked me to go to the gym. I always thought "oh it's because he wants me to be healthy" Nope that comment was later followed by "why don't you wear more dresses like other girls?" And "why don't you keep your hair long instead of short?" He was REALLY attractive so I became super insecure and thought all the changes he was suggesting where actually genuine. Turns out he was just a shallow douche.

I guess this most recently happened with a guy I'd had a crush on for a while, then we dated for a few months and I saw a lot of things I didn't like about him but just kept ignoring them because I wanted to like him. Maybe I just didn't want to be alone.

Dated a guy for almost three years who was constantly accusing me of flirting with other guys and getting jealous over the smallest things. He said it was because he just loved me so much, that's what my parents and my friends said as well. I believed them. Turns out he had been cheating on me the last month of our relationship and I found the naked photos and texts in his phone to prove it. He had been projecting all his inner demons on me. Ended it immediately.

He was hesitant to commit.

He made promises he couldn't keep.

It was in my first “grown-up” relationship, and we were living together.

We had begun the relationship with him putting me on a pedestal, though I hadn’t realised it. When it became clear that I was indeed a regular, flawed human, I think that was pretty hard for him. Plus I was his first everything - and he moved out of home to move in with me. He was not ready for a committed relationship, and made a lot of promises he couldn’t keep.

Not his fault, but wish I had seen the red flags. Breakup was loooooong and messy due to his immaturity and my fury at his immaturity. I’ve never loved anyone as much since though.

He would use alone time as an excuse to shut her out.

During the course of our relationship he would totally shut me out. He said he just wanted some alone time, which I was okay with, but then he would ignore me when I spoke to him for weeks, months. He would tell me he couldn't handle listening to my problems. I told him I felt like he was pushing me away. He told me he would fix it and I believed him. He continued to use me to cook for him, clean our apartment and use me for sex even when I said no. Even after breaking up I tried to be friends and was met with the same brick wall I previously dated. I want my time back that I spent trying to get him to pay attention to me.

He wouldn't let her tag him in pictures.

Facebook - didn’t want tagging in anything together. Only made plans on his terms, never agreed to do anything if I asked. Refused to engage in conversations about our feelings for each other. I really wanted things to work out, he was my perfect guy. He treated me so well when we were together but ignored me when we weren’t. My male friend could see right through him, we fell out when he tried to warn me. Then I caught him in a few lies. The perfect demeanour that he maintained for short period of times slipped. He’s not a “private man” I was an idiot.

He was a self-proclaimed "nice guy."

Since I'm currently married this is from a previous relationship but I still wanna share.

He was a "nice guy" his words. "Not like the rest" also his words. And he proved it for awhile. Mostly though it was all the things he said he did as a boyfriend that turned out not to be true and when I would question him about it I would get a defensive answer back and made to feel guilty.

Example: "I'm the kind of boyfriend who ALWAYS texts his gf good morning. Every single day" Yeah... He would frequently wake up and start streaming on twitch before even acknowledging that I existed. After a couple of times of this I called him on it. Got told that he was "just relaxing after working for 12 hours and I needed to just relax and calm down"

Example 2: "I don't ignore my gfs for anything if you are mine u are my everything." Frequently ignored while he played video games. Or have hang outs cut short so he could go stream or play something.

And I'm going to throw this out there because while i can't prove it I still feel it was a maybe... Yellow flag... That I should have questioned... We did not meet on a dating app but he admitted to having a couple before we got Serious. When things ended he had a new GF almost immediately. I'm thinking he never stopped using the dating apps while we were together...

This was after saying he never met a girl like me. I was so amazing. I was the perfect girl for him. Blah blah fucking blah.

Do yourselves a favor girls, and drop the idiot who can't even prove something as simple as "texting good morning every morning" red flags are everywhere if we just open our eyes and look.

He was all talk, no game.

It was a long distance situation. He was supposed to take a trip to my country but he kept postponing it. I didn't get skeptical much because he really didn't travel to another country and he had his own small business so I thought he was saving up money for his on-going projects. What I didn't check or refused to see was his expenses. He often shopped from expensive brands like J Crew, ate out every day and if I checked the prices I'd see usually not at cheap restaurants. Another big red flag was he suggested we would send each other our shirts and a gift. I sent him mine. He showed me the baseball cap he got for me but never sent it. Turned out he was "all talk" about everything else too. He was all talk, I put all the effort.

He was a hateful alcoholic.

He spent all his free time playing Guild Wars. He was a conservative with a burning hatred for anything left wing or liberal. He would frequently not turn up to work and in one extreme case, dropped his entire life and left the country for 9 months. He was definitely an alcoholic and the worst kind of drunk you could imagine.

I very fiercely ignored all of this because I thought he was a good guy underneath. Nope, he was just a douche. Thank my lucky stars we never got serious.

He wasn't open about his home life.

Fell hard for a guy i worked with. Significantly older than me (flag), pushy about sex (big flag), weird about home life (flag), kind of shitty to children (flaaaagggg).

Turns out, he was married and his wife was in her 3rd trimester of pregnancy. 🙃

My high school boyfriend would always talk about how he hated everyone, how everyone was so shallow and stupid etc. I thought it was just a typical angsty teen thing and kinda played along because I assumed he was joking. 6ish months into our relationship, he began saying the same things about my friends and ended up breaking up with me because I wasn’t smart enough for him.

He would never call.

I didn't date throughout highschool and college not for the lack of options, but coz I really wanted to be sure about the guy. Silly me, I was extremely old school that way back then. This guy manages to win over my heart. He politely and respectfully courted me for a couple of months (old-school, I know. That's the reason I loved him.) Now, this was long distance. A month after I agree to go out with him, he suddenly got "too busy". He had just got into a bschool and claimed I would never realise how hectic it is. Red flags: He would never call. Never text. I kept asking him if he wanted to take a break and that I'd wait for him for a couple of years, all because I didn't want to give up on him. But he insisted that he was still very much in love with me and was just in a bad place. It takes literally 5 minutes to call someone and say hi. I never asked for more. I was extremely patient with him, and the handful of times I did lose my patience, he told me how I was "freaking out" and everything was fine. Turns out, he'd found a girl on campus. Really broke my heart. I still imagine meeting him and slapping him just so I can get some closure.

When it comes to relationships, the key here is to trust your gut. If you have a feeling something is off, chances are, you're right.