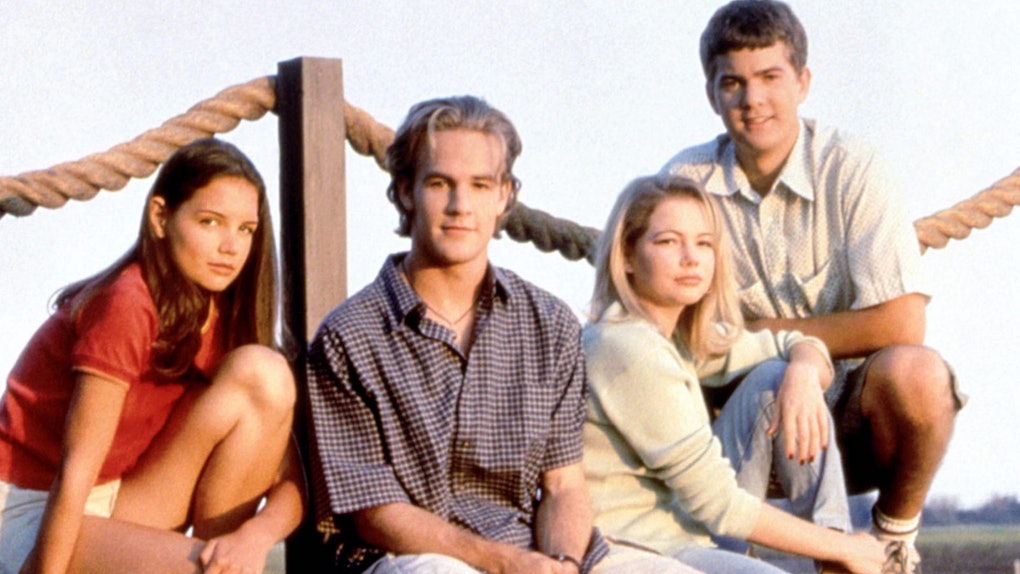 There's no better portal to the '90s than a rewatch of your favorite teen drama, and Dawson's Creek really is one of the best at capturing all the fashion and lingo that defined the era. The WB series ran for six seasons from 1998 to 2003 and launched the careers of James Van Der Beek, Katie Holmes, Joshua Jackson, and Michelle Williams. As of Nov. 1, 2020, the whole series is available to stream on Netflix, but before you start your rewatch, here are some Dawson's Creek behind-the-scenes facts that will add some new layers of enjoyment to the creekside classic.

Back in the late '90s and early 2000s, TV fans were caught up in the ever-evolving love triangle of Dawson Leery, Joey Potter, and Pacey Witter, and the dramatic twists and turns of their high school and college lives still hold up for anyone looking for a great teen show. But there is actually much more to the series than meets the eye — a ton of behind-the-scenes decisions and tiny details could have made Dawson's Creek a completely different show. Now that fans can stream the Creek on Netflix, keep these lesser-known facts and details in mind during your next watch-through:

By some cosmic coincidence, Van Der Beek actually had the perfect name for his most iconic role. Van Der Beek is a Dutch name that literally translates to "from the creek."

Jackson auditioned for Pacey first, but the casting agents actually preferred him for the lead role of Dawson. Of course, that didn't pan out, and Jackson is now known for playing Pacey.

3. Dawson's necklace was made by James Van Der Beek's mom.

Dawson's signature accessory has a special meaning for Van Der Beek, because his mom made the necklace for him. Because of the pendant's importance, the show's wardrobe team made sure to feature it in all of Dawson's outfits.

Arguably the most iconic thing about Dawson's Creek is its instantly recognizable theme song. The Paula Cole track is now synonymous with Dawson, Joey, Pacey, and Jen, but originally, showrunner Kevin Williamson wanted Alanis Morissette's "Hand in My Pocket" to be the show's theme. Because Williamson couldn't secure the rights to the Alanis song, "I Don't Want to Wait" was chosen instead as an alternative.

5. There were a ton of references to Katie Holmes' future husband.

Katie Holmes' high-profile relationship with Tom Cruise dominated the tabloids throughout the 2000s, but years before she met the action star, her character of Joey was very familiar with his work. In a few scenes, Joey, Dawson, and Pacey were each shown watching Cruise's movie Jerry Maguire, and Dawson even threw a Risky Business themed party in Season 3.

6. Jack and Ethan's kiss was a TV first.

The character of Jack McPhee broke a lot of ground for LGBTQ+ representation on mainstream television. His biggest impact came in the Season 3 finale, which featured Jack passionately kissing his boyfriend Ethan after taking him to prom. The moment marked the first romantic kiss between two men on primetime TV.

7. Joshua Jackson gave a shoutout to The Mighty Ducks.

Pacey isn't Joshua Jackson's only iconic role — his big break actually came when he was a kid starring in the Mighty Ducks movies. In Season 1, he actually got to give a winking shoutout to his first major movie after Dawson quipped that all of the Breakfast Club cast had fallen into obscurity. Pacey was quick to defend Emilio Estevez, though, noting "He was in those duck movies, remember? God those were classics. So funny."

One short scene has kept Dawson's Creek alive on social media for two decades. In the Season 3 finale, Dawson contorted his face in anguish as Joey left him to pursue Pacey. The dramatic reaction has become one of the most widely used memes on the internet, and it's all thanks to a bit of improv from Van Der Beek. The actor told HuffPost that Dawson's breakdown wasn't scripted: "I wasn’t supposed to cry, it was just one of those things that happens when you’re playing a character for so long. It wasn’t scripted, I don’t think. I mean, it was appropriate for the scene. You know, it was just high drama; you’ve been living with this character for a while and a scene like that just kind of drops in your lap and you just lose it."

9. Joey is the only character to appear in every episode.

Dawson's name may be in the show's title, but it was actually Joey who got a perfect attendance record in the series. She is the only character to appear in all 128 episodes of Dawson's Creek.

10. The original series finale was much different from the one that aired.

Dawson's Creek was actually supposed to end with what later became its penultimate episode. In that original finale, Jen sets off for New York and Joey doesn't end up with either guy, instead choosing to finally follow her dream of visiting Paris. However, the network convinced creator Kevin Williamson (who had departed from the show years prior) to write his own version of the finale, which was set five years after the events of the original finale and gave Joey and Pacey their happily ever after.

11. Andie returned in the finale, but her scenes were cut.

Andie McPhee was a main character in the early seasons of Dawson's Creek, but she surprisingly disappeared after a couple of episodes in Season 4. After her scary overdose, Andie moved to Italy to finish out high school, only briefly returning at the end of the season to graduate alongside the rest of her class. Andie actually returned once again in the series finale to let everyone know what she had been up to all those years — and to get some closure with Pacey. However, all of Andie's scenes were cut from the episode due to timing, though superfans can still see them on the Season 6 DVD.

12. Dawson and Pacey's rivalry was real.

The love triangle between Joey, Pacey, and Dawson was always at the heart of Dawson's Creek, and it went into overdrive in Season 3 when Joey began dating Pacey. Years later, the writers revealed that Holmes and Jackson's natural chemistry influenced them to pair their characters (the actors were dating IRL), but some off-screen tension between Jackson and Van Der Beek also helped color the dynamic. Writer Gina Fattore revealed the two male leads weren't really getting along at the time, so the writers avoided putting Dawson and Pacey in scenes together.

13. Katie Holmes refused to audition because of her high school musical.

Holmes was still attending high school when she found out a new teen series was looking for its female lead. Rather than jump at the chance and fly out to Los Angeles to audition, Holmes was adamant she remain in her hometown of Toledo, Ohio, to fulfill her role as Lola in her high school's production of Damn Yankees. Instead of auditioning in person, Holmes sent in a video reading Joey's lines while her mom played Dawson.

Dawson's obsession with film goes so deep, it even influenced his iconic hairdo. When contemplating his character's look ahead of Dawson's Creek's debut, Van Der Beek revealed a chance encounter with a Brad Pitt movie made all the difference. "I was rocking the pubescent Jesus look at the time ... We started looking through Entertainment Weekly, which was on the counter. We found an ad for The Devil’s Own, the movie with Brad Pitt. [The crew] said, ‘What about Brad Pitt’s haircut?’ And that’s how I got my Season 1 haircut."

Throughout the first two seasons, Abby Morgan was the snarky party girl who never failed to stir up some drama among the core characters. But her most memorable moment was a death scene that shocked the entire fandom. After spilling her soul to Jen on the docks, Abby suddenly hit her head and fell off the dock, drowning in the water. A lot of fans were confused and upset by the abrupt death, but it was actually Keena's request to have Abby killed off. Apparently, the actor had grown tired of flying out to North Carolina to film her recurring role, so she asked to leave the show.

All six seasons of Dawson's Creek are available to stream now on Netflix.