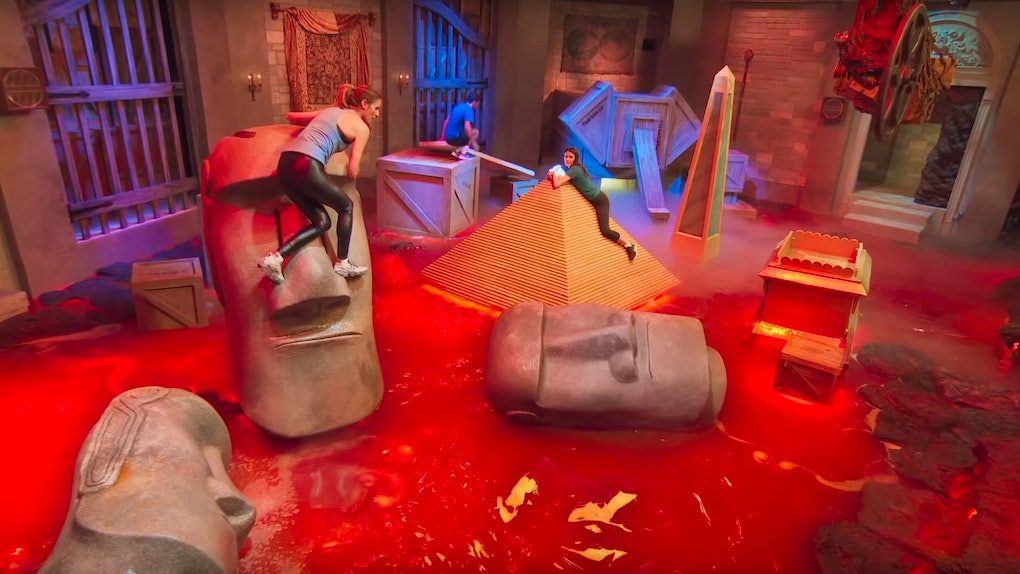 Floor Is Lava took the concept of an innocent childhood game and turned it into a high-stakes, dramatic game show for all ages to enjoy. While it left viewers on the edge of their seats as participants navigated above the mysterious lava-like substance, it also sparked many questions, like: "Where do people go when they fall in the lava?" and "What is the lava actually made of?" Now, Netflix has released a video revealing Floor Is Lava behind-the-scenes facts that should answer most — but definitely not all — of your burning questions. Because what's TV without a little bit of mystery?

Making Floor Is Lava a thrilling obstacle course took a ton of work. From the oversized props, to the intricate puzzles and bubbling lava, the creators had a lot to think about when making the course perfect for participants. Everything the crew did behind the scenes to bring the course to life is honestly pretty impressive.

Viewers may have noticed all of the contestant teams in Floor Is Lava were pretty entertaining in their own right, but that wasn't due to coincidence. The producers used some clever tactics to ensure they were bringing on teams that could make it through the course, break stereotypes, and were just plain fun to watch.

Check out the full behind-the-scenes video for more insight, as well as some of the key takeaways I personally found fascinating, below:

1. Producers Were Inspired By A Childhood Game

The idea for Floor Is Lava arose when producers were brainstorming ideas and thought back to games they played as a kid, but they knew they'd have to change up some things to transform it from an innocent childhood pastime to spectacular adult game show.

2. Designing The Set Was Time- & Labor-Intensive

The production team rented out an old Ikea store and made it into the Floor Is Lava production "village." Over the course of six weeks, each set was created by design and challenge teams, then built by a construction team. Each piece of the set was built from scratch, "lava-proofed," tested, and painted before being put to use.

3. The Set Was Tested In Water First

The production team built a pool in the parking lot of the production "village" so the stunt team could test out the props before they were put into the vat of lava.

4. People Of Different Physical Abilities Tested The Course Before Filming

Since creators wanted to ensure the courses were difficult, but ultimately doable, the stunt team was made up of people of a variety of different physical skills who did trial runs.

There are often several creative ways to move through levels in video games, and the creators of Floor Is Lava wanted the same for their game show. Each course had multiple escape routes to suit different skill levels and abilities.

The production team also used Unity, a game-building platform, to map out each course digitally before participants tackled it.

6. (Almost) Every Surface Was Designed For Safety

How did the participants of Floor Is Lava make it through sliding, falling, and smashing into various props on the course without getting hurt? Well, every piece on set was designed specifically for safety. That said, they weren't necessarily comfortable to fall on. The most dangerous part of the obstacle course was actually the concrete on the edge of the set, which got super slippery from all the lava.

That slippery concrete obviously raised concerns with the safety crew. To remedy the slippery edge, cleaning crews used almost 2,000 towels a day to clean the lava and keep the surfaces dry.

8. There Were No Serious Injuries All Season

Although there was a first-aid and safety crew ready to spring to action in case of emergency, no serious injuries arose all season. It seems all of their prep work in creating the course for various ability levels and ensuring prop safety worked out.

9. Creating The Lava Was A Serious (& Secret) Endeavor

To create the lava, producers went to a famous chemistry lab in Hollywood that produced slime for films including Alien and Ghostbusters. Floor Is Lava, perhaps unsurprisingly, gave them their largest order yet.

To ensure the lava was perfect for the course, the production team tried dozens of formulations. Tests considered viscosity, glow, color, and surface properties of the lava when choosing which one was best. The chosen formula was also tested in a huge tank to see how it would react when contestants would fall in.

The lava was then transported to set where the special effects team invented contraptions to make the lava come alive. So, when you see bubbling lava in the show, know there was a heck of a lot of work that went into that effect.

As for the ingredients of the lava, that is still a secret, so you can't actually recreate this at home.

10. Custom Lava-Friendly Cameras Were Created To Film Contestants In The Course

To get the perfect shots of participants making their way through the course, director Brian Smith and the camera team created a filming mechanism that could float in the lava and get close to the action. It boated around the lava to capture the shots the fixed cameras could not get.

The casting directors wanted to find people with large personalities who had an existing and easy-to-understand relationships with one another — like three sisters or a group of roommates. They also wanted the teams to break stereotypes, so the ones you thought definitely wouldn't win actually often ended up being the ones who did quite well.

12. Swearing Was A Big Issue On Set

Although Floor Is Lava is inspired by an innocent childhood game, it was tough to avoid swearing when it was turned into an intense adult game. A few choice words slipped through the cracks, but since swearing was discouraged (kids do love the show, after all), contestants got inventive with alternatives such as "Oh my golly."

13. Where Contestants Go After Falling Into The Lava Is Top Secret

Where do contestants go after they slip in the lava? That's one secret Floor Is Lava is definitely not revealing.

Floor Is Lava is on Netflix now.

More like this
These 'Shadow And Bone' Behind-The-Scenes Facts Are So Magical
By Abby Monteil
'Emily In Paris' Season 2: Premiere Date, Trailer, Cast, Filming News, & More
By Dylan Kickham and Ani Bundel
Are Chloe & Mitchell Dating After 'The Circle'? Chloe Has An Update — EXCLUSIVE
By Dylan Kickham
Stay up to date