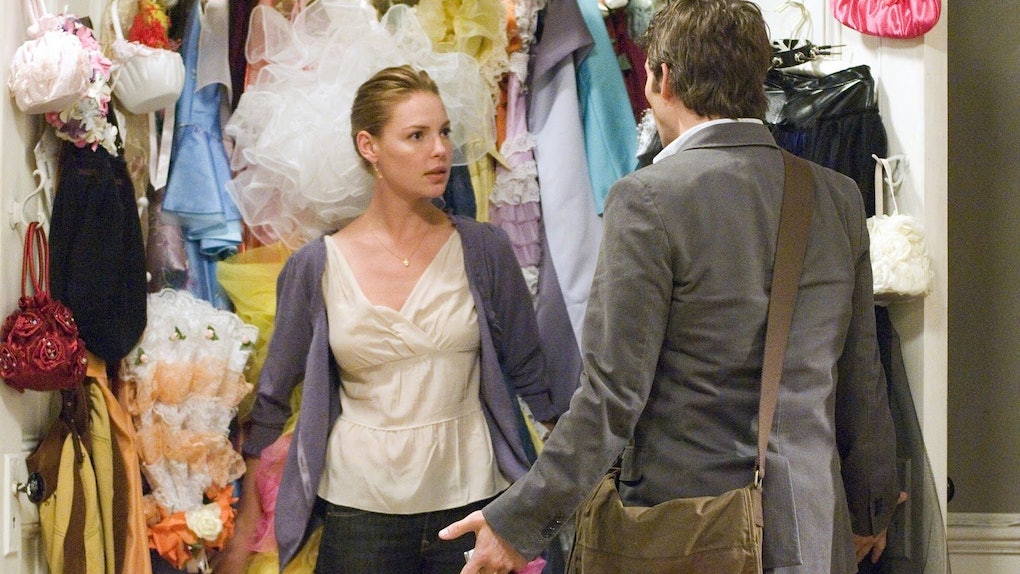 Summertime might mean long, lazy days and rising heat, but these warm months inevitably mean that a wedding or two or five is in your near future. People love getting married when everyone's schedules are a bit freer than usual, but this can also mean that the summer is exhausting for guests who have more than a few cocktail hours and dance floors to anticipate and nerve-wracking for engaged couples planning their big day. If you need to psych yourself up for white dresses and trim suits, you should look into movies about weddings to ready yourself for these ceremonies.

No rom-com is complete without at least one reference to a wedding, but only a special breed of film tackles the complex concept that is balancing distant family, interfering friends, and the pressure to have a picture-perfect wedding day. Most of these stories find a way to turn that stress into humor, which moviegoers have lapped up for decades. Whether you're a panicked bride à la Toula Portokalos or an anxious bridesmaid like Annie Walker, these films have relatable moments that will hopefully ease your mood before the special day rolls around.

Your next few weekends are probably packed with bridal showers, dress fittings, and bachelorette parties, but when you have a free moment, sit back with a full champagne flute that you swiped from last year's fanciest wedding and dive into some fictional matrimonial chaos. Read on for standout movie picks capturing these big days.

Annie Banks' wedding dress might be out of style, but her heartfelt relationship with dad George (Steve Martin) definitely isn't. When Annie announces to her parents that she's engaged to a man they never met, George shifts into hyper-protective mode, fighting against the extravagant wedding plans and feeling reluctant to let go of his daughter. While the sequel focuses on pregnancy, Father of the Bride is a wedding classic and even contributed to a rom-com ending for star Kimberly Williams. Before he became a country music star, her future husband Brad Paisley developed a crush on her after watching Father of the Bride and eventually hired her for a role in one of his music videos, which led to their real-life romance.

If you want to cure the wedding blues with a partner who is less romantically inclined, Wedding Crashers may convince them to sit through yet another marriage ceremony, albeit on the screen. Vince Vaughn and Owen Wilson star as frequent wedding crashers who sneak into others' celebrations to win over bridesmaids. Their no-strings-attached policy changes at one wedding when Wilson's John falls for Claire (Rachel McAdams), a maid of honor from a politically prominent family. He convinces Vaughn's Jeremy to come along on a weekend with Claire's family, deepening the lies meant to just get the men through a few hours at a wedding.

Before you were old enough to root for Aidan instead of Mr. Big on Sex and the City, you may have first fallen in love with John Corbett as vegetarian high school teacher Ian in My Big Fat Greek Wedding. He officially meets Toula (Nia Vardalos) after a series of meet-cutes, but coming from a very traditional, Greek family, Toula is positive that their romance is ill-fated. As the title suggests, they move past this hump to face the struggles of blending two very different families through marriage.

Watching Bridesmaids is acceptable at any time of the year, but it feels especially relevant if your time to be a bridesmaid has finally arrived. Seeing a close friend or sister begin a new life with someone can cause an odd assortment of feelings, especially if your own life is at a crossroads like that of Kristen Wiig's Annie. Stuck in a dull job while wanting more from a friends-with-benefits situation, Annie begins to fear the loss of best friend Lillian (Maya Rudolph) when she gets engaged and starts to rely more on another bridesmaid than maid of honor Annie. In between delivering real takes on female friendship, Bridesmaids is also hilarious pre-wedding viewing.

If you like your weddings with a good old-fascinated fascinator in tow, the very British Four Weddings and a Funeral is right up your alley. The central romance in this is a little lacking, but it's the ragtag group of single friends attending weddings together that makes the movie a winner. At the first of the titular weddings, Hugh Grant's Charles clicks with American guest Carrie (Andie MacDowell), but as that weekend comes to an end, they separate, beginning a pattern of running into each other at others' weddings. Reception shenanigans will keep you laughing until the film's promised funeral undoubtedly has you reaching for a tissue.

In 27 Dresses, Katherine Heigl's Jane lives by the mantra of "always the bridesmaid, never the bride." When her sister Tess falls in love with Jane's boss and longtime crush, perennial bridesmaid Jane has no choice but to support her despite Tess fibbing to impress her fiancé. Meanwhile, wedding columnist Kevin (James Marsden) decides to profile Jane and her stash of bridesmaid dresses for his newspaper but keeps his intentions hidden as they debate about love and marriage. Come for the montage of ridiculous wedding themes and stay for the "Bennie and the Jets" singalong.

Old friends coming together for a wedding always has the potential to bring up old stories, good or bad. In The Best Man, Taye Diggs' Harper is fresh off the pre-release success of his first novel as he prepares to be the best man at the wedding of college sweethearts Lance (Morris Chestnut) and Mia (Nia Long). Little do his friends know, Harper's characters are closely aligned with themselves, and the book essentially spills the truth about Harper and Mia's onetime hookup in college. As the gang nears the big day, Harper tries to prevent Lance from discovering this dirty little secret.

Along with The Runaway Bride, My Best Friend's Wedding presents an irresistible concoction of Julia Roberts, weddings, and 1990s fashion. Roberts plays restaurant critic Julianne, who's distressed after her best friend Michael (Dermot Mulroney) announces his unexpected engagement. His whirlwind path to marriage prompts Julianne to realize she's in love with him. As the wedding celebrations kick off, she aims to prove that Michael and fiancée Kimmy (Cameron Diaz) are a flawed match. You may disagree with Julianne's sneaky plotting, but the wedding party's performance of "I Say a Little Prayer" makes the film worth watching.

Starring America Ferrera and Lance Gross, Our Family Wedding tackles the tension of a wedding involving families that initially only see their differences from each other. Lucia's Mexican family and Marcus' African-American family are determined to have more of their own backgrounds represented in the pair's sudden wedding, but as cultures clash and secrets spill out, the certainty of a celebration may decline. The trailer and its use of the universal movie wedding song "This Will Be (An Everlasting Love)" confirm otherwise, but who doesn't love some wedding mishaps?

Forget tension between a bride and her bridesmaids, because an even more unpredictable situation entails planning your wedding at the same time as your lifelong best friend. Anne Hathaway and Kate Hudson's BFF duo share a dream of getting married at the Plaza Hotel in June, but after a scheduling mishap, both of their ceremonies end up at the same time on the same day. The wedding planning ultimately drives them apart to the point of sabotaging each other's ceremonies. Bride Wars is definitely a big reminder of exactly what you shouldn't do ahead of your wedding day.

Coming to America is probably remembered more as a comedy, but the idea of true love is what inspires Eddie Murphy's Prince Akeem to leave his kingdom for an American adventure. Wanting to find his own wife rather than enter an arranged marriage, Akeem settles into a New York groove in hopes of coming across love. The story does end with a wedding, but the path to that moment is fun and unexpected.

Jennifer Lopez made a rom-com comeback with 2018's Second Act, but the early 2000s were a great time to be a Lopez fan. In The Wedding Planner, she plays a woman who has devoted herself to her career of wedding planning rather than a love life. Things get complicated when she realizes a man with whom she had a recent romantic evening is the groom for a high-profile wedding she was just assigned. You don't have to be a rom-com whiz to figure out how this will end, but there's a reason why people adore wedding stories, and The Wedding Planner is essential viewing when it comes to this niche.

More like this
10 Rainy Day Movies To Watch On Netflix That Are Perfect To Pass The Time
By Kristen Perrone and Lexi Williams
Zendaya's Instagram About Voicing 'Space Jam: A New Legacy's Lola Bunny Is A Throwback
By Abby Monteil
Is Netflix Making A 'To All The Boys' Spinoff Series About Kitty? Here's The Tea
By Rachel Varina
Stay up to date