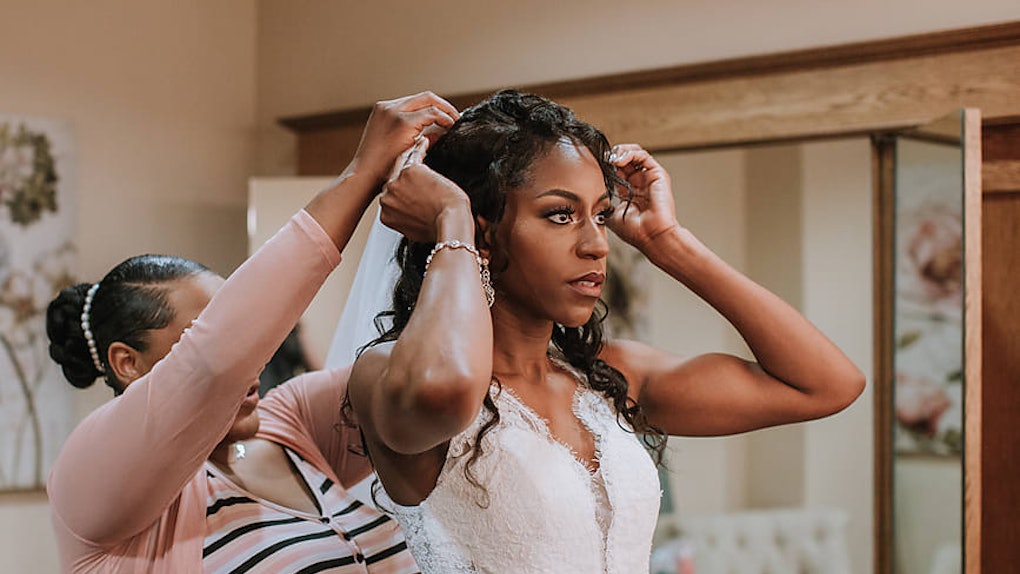 11 Things That Can Ruin Your Best Friend's Wedding, So Be On Your Toes

On your best friend's wedding day, she's going to be the happiest you have ever seen her. She'll have a natural glow that'll literally light her way down the aisle and towards this forever person in her life. It will be a beautiful moment, but that's only if you help your girl deflect situations that could put a damper on her day. You may think you know most things that can ruin your best friend's wedding, but you don't want to overlook a tiny fiasco in the making.

Whether you're a bridesmaid or a maid of honor, you owe a helping hand to your girl from start to finish. You've been there for the whole process. You remember when the happy couple just started dating, when the question was popped, and when your bestie said "yes" to the dress. Now, you've got to make sure the big day isn't soiled by any unnecessary drama.

Make sure you're fully on board to support your girl, because you don't want to give her any added stress. There's no such thing as "perfect," and something small like a meal or two getting mixed up is bound to happen. You can control these 11 things, though, and ensure that your bestie doesn't have to worry about them crashing her wedding.

The bride is the center of attention and the most important person on the wedding day. Period. Do not nag about how you hate the color of your dress or don't like the groomsman you will be with. Today is about the bride, and she doesn't need anyone being high maintenance on a day she planned.

2. Make Sure Her Bachelorette Party Is ALL About Her

You have to consider what your bestie likes to do, and make the bachelorette party activities and location specifically designed for her. You might love Vegas, but that doesn't mean that's where or how she would want to celebrate.

3. Don't Feed Into Any Bridesmaid Drama

There's that one bridesmaid who can't help but start drama. Don't entertain it, and if it really starts to get out of hand, try to shut it down. If all else fails, let your bestie know what's up. The last thing you want is for your girl to think you condone or are part of the dramatics. Nobody has time for that.

4. Don't Slack On Your Bridesmaid Duties

You can have a good time at the wedding. Just be sure that you are still attentive to your bridesmaid duties. Your bestie picked you for a reason, and she's relying on you to help her through her big day in every possible way. There's no reason why she should have any doubt that you aren't going to get things done.

5. Let Her Vent, Even If She Is Slightly Repeating Herself

The last thing you want is a bride with bottled up emotions. It's a big day that comes with a lot of stress, and she may blurt out frustrations and demands at times. Let her vent, and don't immediately associate her nerves for being a bridezilla. She needs you during those moments more than ever. Your job is to be loving and supportive.

Family drama is still annoying drama. Your bestie had to invite at least one aunt, uncle, or cousin who doesn't always vibe with everyone else. Don't let anyone who is only going to spew negativity, get on the mic. Keep your eyes peeled. and shower your bestie in positive vibes only. If worse comes to worse, grab the mic and start belting out a solo. (You got this.)

7. Avoid Being Glued To Your Phone

Look up! There's a magical day unfolding in front of you. There are photographers for a reason. Snapping a few pics of the bride getting ready is fine, but don't stay buried in your phone the whole time. Bare witness with your eyes, not from behind a phone screen. This is her day, not yours.

Whenever there's a special occasion, you and your best friend dance like no one's watching to your song. On your bestie's wedding day, you have to consider that she has a set list and order she wants a few songs to be played. It's her vision, so don't interfere with that and confuse the DJ with a request when it's not the right time.

9. Never Show Up With Someone Who Wasn't Invited

Your BFF should know whether or not you are going stag to her wedding. You shouldn't invite someone who wasn't invited, though. If you're feeling weird about going by yourself, tell your girl. She probably already has you seated next to someone who's solo, too.

10. Don't Fight Over Catching The Bouquet

I know there's so much superstition embedded in who catches the bouquet. Don't let that be a reason you straight up fight with the other ladies and knock them over in order to catch the flowers. It's not that big of a deal, and it will embarrass the bride. And remember, the video will make you look like a bridesmaidzilla.

11. No Talking Or Commenting During The Ceremony

Yes, people still try to be funny and make comments during the ceremony at weddings. Don't be that person, because those two at the altar deserve everyone's undivided attention. Their moment shouldn't involve outside chatter or remarks, so be sure to keep it that way.

Allow your bestie to have the best wedding she could possibly have. Your support and cooperation are huge contributions.

More like this
How You Love To Be Spoiled, According To Your Zodiac Sign
By Roya Backlund
90 'High School Musical' Series-Inspired Group Chat Names Meant For Wildcats
By Rachel Chapman
The 'Friends' Experience In NYC Sleepover Opp Will Make You Say, "Oh. My. God."
By Rachel Chapman
Stay up to date