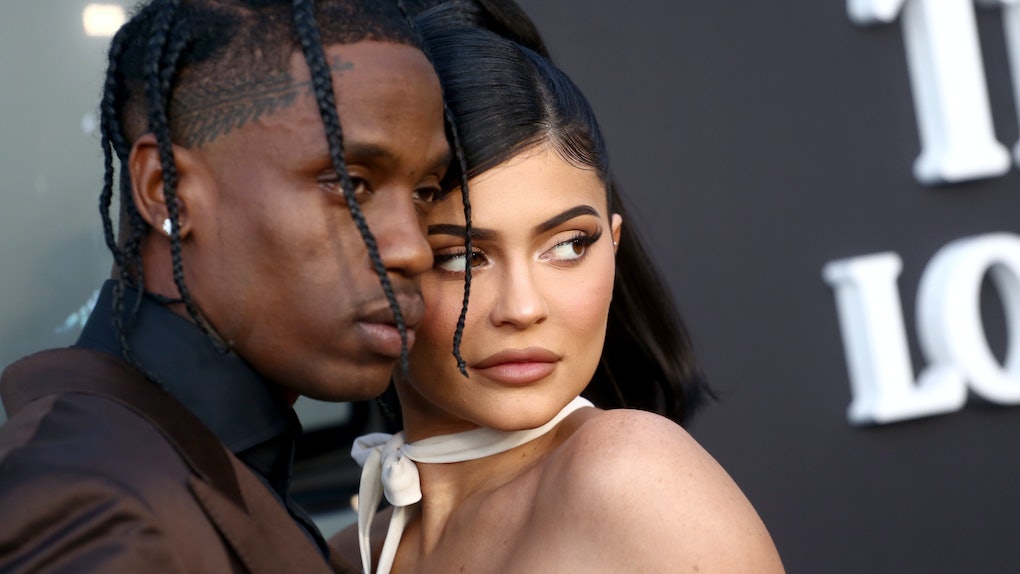 If you haven't heard the news already, one of the most iconic celeb couples have reportedly gone their separate ways. And these tweets about Kylie Jenner and Travis Scott's reported breakup definitely raise some questions. While neither Jenner nor Scott have publicly addressed the split, some fans are wondering if the breakup rumors are intended to be a publicity stunt to promote Scott's new single, "Highest In The Room," which is set to drop Oct. 4. Elite Daily reached out to reps for Jenner and Scott about this fan theory but did not hear back in time for publication.

If you missed the memo about the reported breakup, here's what went down: A TMZ report published Oct. 1 claimed that Jenner and Scott have been broken up for "several weeks," and that sources connected to the couple haven't seen them together since the premiere of Scott's Netflix documentary Look Mom I Can Fly on Aug. 27.

TMZ's sources also claimed that the two were reportedly trying to make their relationship work "for a while," until deciding to take a break.

OK, now that you've got all of the necessary info, allow me to present you with 10 tweets of fans theorizing that this is all just a PR stunt masterminded by — you guessed it — Kris Jenner.

This Fan Thinks It's An Exemplary PR Stunt

This Fan Thinks It's All For Scott To Get More Numbers

This Fan Is Super Skeptical About The Timing

This Fan Makes It Seem Obvious

Again, The Timing Is Very Fishy

This Fan Wants Them To Just Stop It Already

This Fan Is Definitely Questioning Things

This Fan Is Super Skeptical

This Fan Is Just Hoping That It's A Publicity Stunt

Obviously, considering the fact that the two of them haven't even addressed their reported split, these are all just theories. The two might not even be split up! And even if the reported breakup is true, there's no telling whether or not this was another one of Jenner's mom's infamous publicity stunts.

News of the reported split broke just weeks after Jenner and Scott did an interview for Playboy together. The cover photo also happened to be a picture of Jenner snapped by Scott. In the interview the two spoke candidly about their sex life after having a child together. "A lot of people claim that having a baby can hurt your sex life, but I feel like that's the opposite of our experience," Scott said. "Yeah, I feel like we've definitely proven that rumor to be wrong," Jenner replied. So, yeah, it sounds like things were at least going well in the bedroom.

Jenner also opened up about how Scott empowered her sexuality as a new mom. "You remind me that motherhood and sexuality can coexist and just because you embrace your sexuality doesn't mean you have loose morals or you're not a good mother," she said. "You can be sexy and still be a bad*ss mom."

Jenner also opened up about what makes them work as a couple on an emotional level. "We think the same and we have the same goals and passions in life,” she explained. “Besides the fact that we have good chemistry, we have a lot of fun together. You’re my best friend. Through all the ups and downs that every relationship has, we evolve together through them and keep getting stronger."