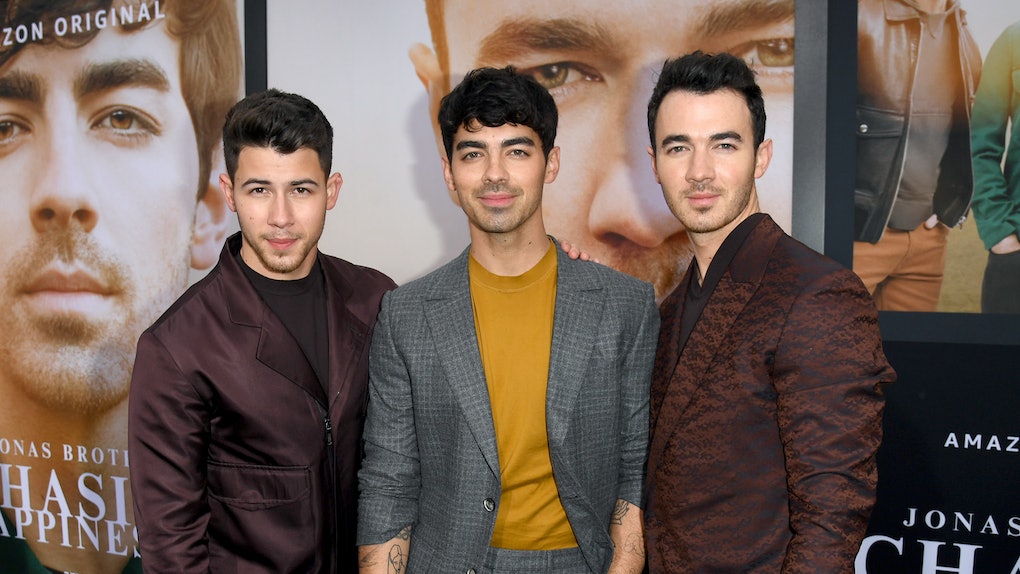 Keep calm, but the Jonas Brothers documentary has officially hit Amazon Prime. Chasing Happiness launched on the streaming service on June 4, and given the June 7 release of the band's new album Happiness Begins, this is a week worth burnin' up for. Exploring the brothers' childhoods in New Jersey and their rise to fame, the documentary is bound to leave fans feeling nostalgic. It's only natural to drive down memory lane and watch these Jonas Brothers videos after sitting through one or two viewings of Chasing Happiness.

If you were of a certain age during the Jonas Brothers' heyday in the mid-to-late 2000s, chances are that you have a near-perfect memory of most of their music videos. These ran seemingly endlessly on Disney Channel in a time before YouTube was practically the only place to see full music videos. I know I'm instantly transported to being 13 years old when "Lovebug" or "S.O.S" pops up in my recommended videos section, so I can't be the only Jo Bro fan who's using this documentary premiere as a chance to revisit my youth. In addition to recapping Kevin, Joe, and Nick's childhoods and professionals beginnings, Chasing Happiness details their 2013 split and the recent decision to come back together as a band.

Whether you love the band's early covers or their most recent hits, here's to rediscovering an old favorite among the videos below.

As the group's comeback single, "Sucker" was not only a catchy jam but also a capsule of how Kevin, Joe, and Nick have changed since they last worked together. All of the men's real-life partners appeared in the music video as their love interests, subtly presenting the Jonas Brothers in 2019 as more of a family unit than ever before.

"Lovebug" and the retro love story its music video presents are timeless, but what really sticks out all these years later is the drama that accompanied this project. Camilla Belle played the female lead in this video, and back in 2008, Taylor Swift claimed that Joe dumped her in an infamous 27-second phone call because he met Belle on the "Lovebug" set. Swift has since said that she regrets calling out Joe, but I can't help but relish in the memory of this teen angst while watching the "Lovebug" video.

You couldn't call yourself a true Jonas Brothers fan unless you knew about their bodyguard Big Rob, aka Robert Feggans. Big Rob had a rapping interlude in the band's 2008 hit "Burnin' Up," and in 2019, his absence is the only thing making the Jonas Brothers' comeback less than perfect. In an April 2019 interview, the brothers revealed that Big Rob is now working with Ariana Grande and that they keep in touch with him via FaceTime. And rest assured, when they perform "Burnin' Up" live, Big Rob's original rap is still played in full.

The jury's still out about a Camp Rock reunion, so until the fictional band Connect 3 makes a comeback, I'll keep playing the jam "Play My Music" on repeat. It appears that the song hasn't reached the Jonas Brothers' current live rotation yet, but I'll keep my fingers crossed for a 2019 performance complete with Kevin and Joe's long, straightened hair.

Does anything sum up teenage longing better than this? In addition to stirring up all your feels, the "When You Look Me In The Eyes" music video features live concert footage, so if you were a hardcore fan back in the day, maybe you and your squad pop up in these clips. Talk about an epic throwback post.

I was today years old when I learned that "Year 3000" was actually originally recorded in 2003 by English rock band Busted. That version is a little more adult, but the song hit a new level of global fame thanks to the Jonas Brothers' 2006 cover. The trio still loves throwing things back (or is it forward?) to "Year 3000," and they performed a rendition of it fitting for 2019 on The Late Late Show with James Corden.

Another highlight of the men's March 2019 stint on The Late Late Show was their Carpool Karaoke segment with Corden. In between belting along to some of their greatest hits, they opened up about the decision to split, slightly shaded their Disney days, and even took lie detector tests for well-meaning brotherly fun. I've yet to see a celebrity who doesn't flourish when hanging out with Corden, and the Jonas Brothers are no exception.

At the end of the day, the Jonas Brothers of 2007 were sensitive boys telling fans that they were just as confused and intrigued about love as every other teen was. "S.O.S" mentions miscommunications over text and second-guessing relationships, and these obstacles feel even more relevant in 2019.

The Jonas Brothers were just good old Disney kids when they started out. While they also covered a few cinematic hits for Disneymania albums, they performed The Little Mermaid's "Poor Unfortunate Souls" for a special edition of the movie. Performances like these won't pop up on the Jonas Brothers' list of greatest hits any time soon, but they still represent the very first time most of us likely encountered the band.

This was released as a single for the Meet the Robinsons soundtrack, and while it isn't as memorable as "Year 3000," "Kids of the Future" feels particularly prophetic in 2019. At one point, Nick sings, "You will not believe where we're going now," and it's safe to say no one could've predicted the band's current success and the path they took to get there.